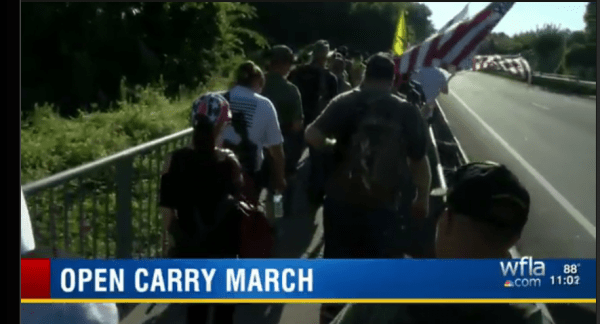 Arizona – -(Ammoland.com)- Hundreds of men women and children participated in an open carry march in Florida on the 4th of July.  On video posted on facebook, you can see the march stretching into the distance in front of and in back of the camera. You can also see the wfla video posted on wfla.com.  It is taken at a corner. That perspective makes the march look much smaller. From wfla.com:

INVERNESS, FL (WFLA) – More than 300 people marched through the streets of Inverness in Citrus County to show their support for the Second Amendment on the morning of Fourth of July.

Many carried American flags on this Independence Day, and all marchers carried loaded guns.“I believe in the American right to be able to bear arms and not have anybody try to take them away,” said participant Terry Stimpfling.

The march is particularly impressive because of the temperature.  In the screenshot from wfla.com, you can see the temperature in the lower right at 88 degrees F.  In humid Florida, that is very hot.  The march route was five miles long.  We do not know if everyone participated for the entire  five miles.  No heat injuries were reported.  This shows good planning on the part of the march coordinators.

Florida is one of only a handful of states that ban the regular open carry of firearms.  Florida’s ban is relatively recent.  It was put in place in a special session of the Florida legislature after heavy lobbying by then Dade County (Miami) state AG Janet Reno.  Reno became the Clinton administration’s infamous AG, of the Waco massacre, the Microsoft prosecution, and the leak against Richard Jewel.

An  open carry bill came close to passing in the Florida legislature this year.  It had the support of a large majority of the House and Senate, but was blocked in committee by Senator Portilla (R) Miami.

When South Carolina restores the Second Amendment rights to open carry, the remaining states will be those that contain the urban centers of Second Amendment infringement in the United States.  In New York, New York City; in Illinois, Chicago.  In California, Los Angeles and San Francisco.  Dishonorable mention can be made of Washington D.C. which also bans open carry. Without the disarmist activists in those five cities, there would not be a significant disarmist movement in the United States.

No, Open Carry Texas (OCT), along with Open Carry Tarrant County (OCTC) and others, deserve no credit for open carry in Texas. In fact, they opposed the licensed open carry bill, HB910. Their confrontations were at best counter productive. For the details on history of open carry efforts in Texas, see: https://www.texasfirearmscoalition.com/index.php/frontpage-articles/86-the-history-of-open-carry-efforts-in-texas I watched the testimony of C. J. Grisham (OCT) and Terry Holcomb (Texas Carry). They did not support HB910, but rather spoke in favor of other bills to allow unlicensed open carry. The bills OCT and others supported did not even pass committee review and were never seen… Read more »

You forgot about lousy New Jersey. Until our current loss of a gov. Goes it will never happen here

Open carry is also illegal in New Jersey. If not by law certainly by practice. We also have an impossible to meet standard for concealed carry.

There is an open carry lawsuit currently before the 9th circuit court which seeks to over turn the open carry ban on both longarms and handguns. If he’s successful he will also overturn the ridiculous law in Hawaii as well. The Rest need to be overturned by the courts so we need a supreme court justice appointed that is pro gun otherwise it’s not going to happen

In Texas,I really think the rallies and protests is what got it passed and signed in to law by Gov.Greg Abbott. OCT really deserves the credit for organizing these events and keeping the pressure on. That’s what they need to do in Florida too.

Story didn’t mention how many people were killed. There was blood in the streets, right?