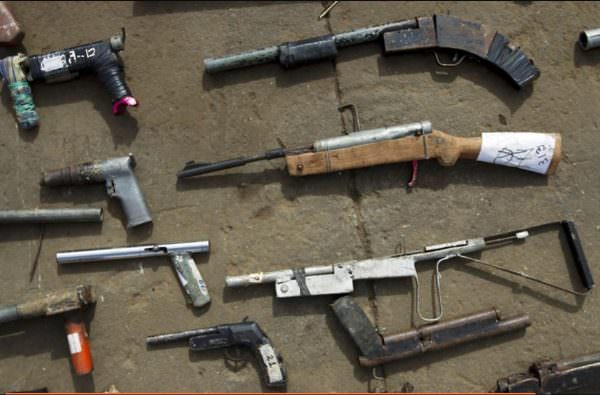 Arizona – -(Ammoland.com)-
Venezuela is a country rich in oil made poor by the government takeover of a kleptocracy with socialistic underpining.

The solution to problems in that philosophy come with governmental edicts, followed by destructive policies.  In Venezuela’s case, the drop in oil price made it much harder to buy votes.  Votes are hard to buy when you do not have any money.

The Venezuela government followed its predilections for solving society’s problems by outlawing the private ownership of guns, with the purported purpose of reducing crime.

What happened was predictable for anyone who knows basic economics.  Guns became so valuable that police are routinely murdered for their weapons; local manufacture of crude but effective pistols has increased.

Crime soared, and the concentration of power by the kleptocracy was, temporarily, solidified.

The Venezuelan government made a public spectacle of their “success” in confiscating firearms from poor farmers, desperate citizens (admittedly most citizens in Venezuela) and criminals.

The regime destroyed 2,000 firearms a few days ago. Given the state of police in Venezuela, underpaid, riddled with corruption, and often murdered for their guns, I am sure the best guns never made it back to the police station, or escaped the eye of police management. In a kleptocracy, even the quality of the guns destroyed falls through the floor. From reuters.com:

“We are going to bring disarmament and peace,” Reverol told reporters, while police officers drilled and sawed at rusty shotguns, home made pistols and some newer weapons.

Other guns were crushed in truck-mounted presses. Some members of the public watched, although more danced to a nearby sound system playing salsa music.

The ban on private gun ownership was imposed in 2012.  From businessinsider.com:

Gangs often get weapons from the police, either by stealing them or buying them from corrupt officers, experts say. Recent years have also seen an increase in criminals targeting police and security forces in order to take their weapons, especially after private gun ownership was made illegal in 2012.

Through the first five months of 2016, 163 police, military officers, and bodyguards were killed — a 14% increase over the same period last year. In 80% of those cases the assailants also took the victim’s weapon. A government source told El Nacional that the victim’s weapons were recovered only 3% of the time.

India had a similar problem years ago.  In the 1980’s, I routinely read of police being murdered in India for their firearms.  I have not seen such reports recently, but the quality of “country made” guns seems to have gone up to meet demand in India.  Venezuela has only had a couple of years to develop a strong black market in firearms and ammunition.

Give it a few years.  The Brazilian criminals favor homemade or small shop black market submachine guns.  They are one of the easiest repeating firearms to make.

The head of the Organization of American States put it thus:

“This crisis is reaching a breaking point. These challenges cannot be blamed on external forces. The situation facing Venezuela today is the direct result of the actions of those currently in power,” Almargo’s report to the OAS Permanent Council said.

Here in the UK the tighter the gun laws become, the more criminals are resorting to other weapons such as kitchen knives, hammers and screwdrivers. Of course organised crime still uses guns as there is no shortage of supply coming out of Africa, the erstwhile East Bloc and the Middle East (usually with those “poor” asylum seekers).

Nature abhors a vacuum. It will be filled one way or the other.