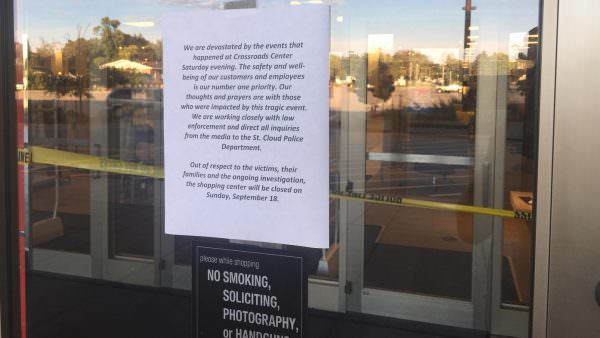 Arizona – -(Ammoland.com)-
While the NO HANDGUNS sign is cut off in this photograph, it clearly shows that the Crossroads Center, where the Islamic mass stabbing terror attack took place, was and is posted as a Gun Free Zone.

In Minnesota, the sign has no legal weight.  Minnesota law prevents malls from banning guns from the common areas, but malls are not prevented from asking that visitors not carry guns.  The sign reads “please while shopping”.  That makes it a request, not a command.

The difference can easily be lost on a someone who is not well schooled in the niceties of the law.  The 22 year old Jihadist likely believed that he was in a gun free zone.  It is the perception of the attacker that leads to the selection of the attack location, not the actual legally defined situation.

It is almost certain that Jason Falconer, as  firearms instructor, competitor, and concealed carry advocate, knew that the signs were only a request, and did not have the force of law.  It is a fact that is widely circulated among Second Amendment supporters in Minnesota.  From mngopac.org:

The Mall of America has long had a policy to prohibit lawful carry of firearms by Minnesotans, including posting signs throughout the mall and removing permit holders seen to be carrying firearms.

Minnesota law, however, prohibits a landlord from interfering with the carrying of firearms under MN statute 624.714 by tenants or their guests.

The current threat environment makes it unconscionable to seek to prohibit self-defense by the mall's customers.

The legal situation is the same for the Crossroads Center Mall in St. Cloud as for the Mall of America.

Second Amendment supporters are correct in pointing out that the signs asking customers not to carry handguns at the Crossroads Center Mall do not carry the force of law. That does not stop the perception of the vast majority of people that the mall is a gun free zone.

It is the perception of the person who is making the decision on where to carry out the attack that determines whether a location becomes attractive to the attacker. If the attacker took the time to look at the Crossroads Center website, the perception would have been reinforced by the published policy on weapons possession on the premises. From the crossroadscenter.com:

Examples of specific activities that are prohibited include but are not limited to:

Was the Crossroads Center a Gun Free Zone, as far as as the 22-year-old radical Islamic attacker saw it?

Yes. Politicians are fond of telling us that “perception is reality”.  In this case perception was the important reality, until an armed American hero showed that reality trumps perception.

Great article! Since the story didn’t make any points for lame stream media to pass on to the masses, this lesson for those who think guns are evil will not be learned.
Unfortunately, all those who believe in defending themselves and their families are the only ones that will hear this story with the value it carries.
Fortunately, MN has not tried to stop people from defending themselves. So kudos to the state!

I have relatives in this area, due to Dayton’s and Obama’s policies, we have these hostile people in our country who do not want to assimilate into society, want to kill us with religion as an excuse, they neither care for our customs, or will follow them, also want everything handed too them on a platter! can kill stab and maim us with impunity! on top of this the powers that be wants more of them why? If these pig lovers keep it up there might be retaliation Guess why Hillery’s Federal Baby incinerators are in the area, too protect… Read more »

“Was the Crossroads Center a Gun Free Zone, as far as as the 22-year-old radical Islamic attacker saw it?
Yes. Politicians are fond of telling us that “perception is reality.”

It appears he percepted wrong, a mistake he wont be repeating. And hopefully this will serve as a “teachable moment” for any other aspiring terrorists that “Minnesota nice” has limits.

Are you sure it wasn’t a gun that looked and stabbed like a knife? Cause the news said……lol

Wait….. are you sure it wasn’t a gun that looked and stabbed like a knife?