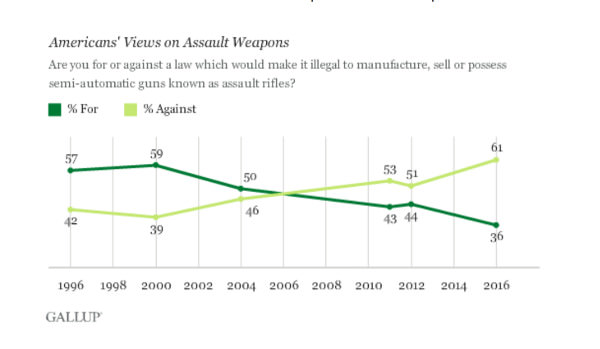 Arizona – -(Ammoland.com)-
Gallop released results of a poll taken on the 5-9 of October, 2016.  The last time they had asked the question was in 2012.   Support for a ban is the lowest it has ever been, since the question was first asked.

I am not surprised at the drop.  It indicates that the population is becoming more educated about crime and “assault rifles”.  Gallup notes that the drop in support for an “assault rifle” ban correlates with a general decline in trust in the government.

Historically, people who own guns have been far, far less in favor of placing more infringements on the Second Amendment.  Many assume this is because they reasonably oppose more regulation on their activities, while people who do not own guns show a “free rider” effect.  More regulation of something that you do not have does not impose an obvious and immediate personal cost to you.  Part of what we are seeing is due to a significant rise in gun ownership, especially ownership of the rifles mentioned.  Many millions have been sold in the period covered by the graph.

An often overlooked explanation of why gun owners oppose more gun restrictions is seldom mentioned, but obvious, once considered.  Gun owners know more about the subject than non-gun owners.

Unfortunately, Gallup has never asked a “calibration” question to determine the knowledge of the facts by the people answering.  I would like to see a question by Gallup such as “How many people are murdered with rifles in a given year?”

Bans on ownership of firearms have always been driven by people who are ignorant of guns.  It is why the bans on guns in England and Australia were able to be put in place in democratic countries.  The large majority of people in those countries did not own guns and were ignorant of them.  This is a major reason the drive for more infringements on the Second Amendment is failing in the United States.  As a wealthy society, guns are more affordable for more people than ever before.  Nearly a hundred million guns have been added to the private stock during the Obama administration.  That is a 30 percent increase in eight years.

In spite of ambiguous surveys that show rapid drops (and increases) in gun ownership, other indicators show a strong and growing population of gun owners.   The number of individual people who admit to being gun owners in this Gallup poll was 29%.  That is not households, but individuals.  The number has varied from 27% to 34% over the last 12 polls and 17 years.  The lowest was at the first poll in 2000 and in 2013; the highest in 2011.  About one third of people say that they would not tell  a pollster if they had a gun, which would indicate the gun owning percent of the population is near 44%.  The Gallup question does not allow for an answer of more than one gun owner in a household.

Indicators such as increasing gun ownership among minorities and women, as well as skyrocketing gun carry permits and gun sales, suggest ownership is much higher than is shown in the surveys.

We do not know how many gun owners there are in the United States; but increasing gun ownership, and knowledge about guns, can explain much of the drop in support for gun bans.

Dean, this was an excelle6piece. Just a quick bit o’ the old feedback to improve readability – at the end of paragraph 8, change “gallop” to ” Gallup.”