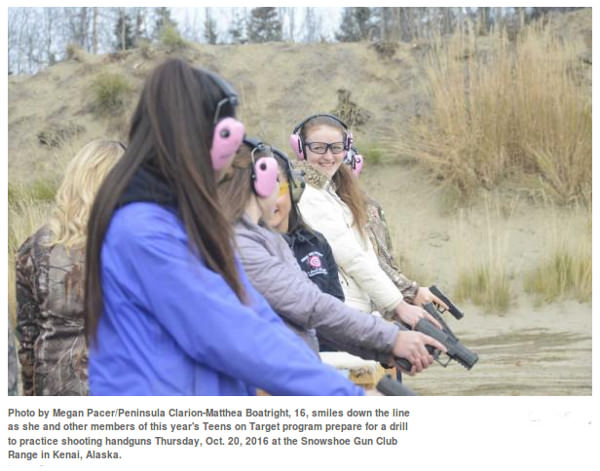 Arizona – -(Ammoland.com)-
Four decades ago, gun clubs in schools were common.  Then came the all out assault on the Second Amendment.  Educators and the NEA were (and are) firmly in the hands of “progressives”. Gun clubs in schools had to go.  There are only a few gun clubs in today’s schools.  “Progressives” want to be sure to indoctrinate the youth that guns are bad and should be strictly left to the police.  The message has not resonated, and is being fought.

Gun clubs in schools are starting to make a come back.  People are finding a way to get around school gun bans imposed by legislatures, or even school boards.  In Alaska, a popular program for young women has been created on the Kenai peninsula. You can see some of them in the picture above, courtesy the Peninsula Clarion. From peninsulaclarion.com:

The young women were members of Teens on Target, created by Elaina Spraker, and they were just getting into their third meeting of this year’s course at the gun club in Kenai. Spraker said she got the idea for the program back in 2009 when she asked her son, then a student at Soldotna High School, whether the girls he hung out with enjoyed going to the shooting range as much as he and his male friends did. His answer was that they tended to hang back, which got Spraker thinking of a way to get young women more involved in shooting and firearm safety.

“What we discovered in the years from then until now, is an amazing thing that has happened with these women is just the strength and empowerment and what it does to their self esteem,” Spraker said.

Most of the experience girls have with shooting in Alaska is shooting rifles and shotguns. An especially interesting part of the program is teaching teenage girls to shoot popular handguns. Faith Glassmaker is 14. She went through the class last year. This year her friend, Morgan Reynolds, 14, is attending for the first time. Both were excited about shooting pistols.  Glassmaker said:

“Last year when you (Spraker) had us shooting the pistols, I (thought) ‘This is, like, intense,’ and my adrenalin was just like overflowing,” she said. “And after a couple shots you’re like, ‘I got this.’”

Boatright and Glassmaker have already been through the self-defense class portion of the program taught by members of the Kenai Police Department. Boatright said it was informative and that she only hopes she’d be able to recall what she learned while under the pressure of an emergency situation.

What they learn in the course makes them subject matter experts among their peers. Being familiar with firearms can be a life and death matter in Alaska, in ways unlikely in most states. In June of 2013, a man was killed and eaten by a black bear because his wife was not familiar with firearms.  From topix.com:

“The information we have is they yelled at it, and the bear moved away and went over to some brush, and it was watching them from the brush,” Dahlke said.The couple started walking toward their cabin, Dahlke said.”It attacked him. Then the victim told his wife to run to the cabin, so she ran to the cabin,” he said.Weaver’s wife grabbed a gun from inside the cabin, but the gun jammed when she tried to fire it, Dahlke said. A family member said the woman also tried to throw things at the bear.”The bear obviously was not scared of her at all.

Almost any sort of pistol would likely have stopped the attack, but the couple did not have one with them.  If the wife had been familiar with the firearm, she would almost certainly have been able to shoot the bear and kill it or drive it off.

Bear attacks are extremely rare, even in Alaska.  An Alaskan is far more likely to face a human predator. In either case, the girls are learning a valuable life skill and a lifelong sport that can be practiced long past when other sports have become something for younger people.

Always knew that Sarah Palin was the ‘role model’ and ‘governor’ that Alaska needed!

As a Father and Grandfather of girls of which I taught
Gun safety and the art of shooting. It’s heartwarming
When a box of ammo is preferred over flowers. More
Ammo always brings a smile. All girals as well as boys
Should be taught proper gun safety and shooting, this in itself would be a political game changer in the future. We are slowly losing our values and once the
Roots die so will the tree and all its branches. So cherish and nurture what we have before it’s to late.

‘Girals’? Is that a new category of humans? What we are rapidly losing is those who know how to spell correctly and use a dictionary. P.S. It is ‘too late’, not ‘to late’. AAAAARRRRRGGGGHHHHHHH!