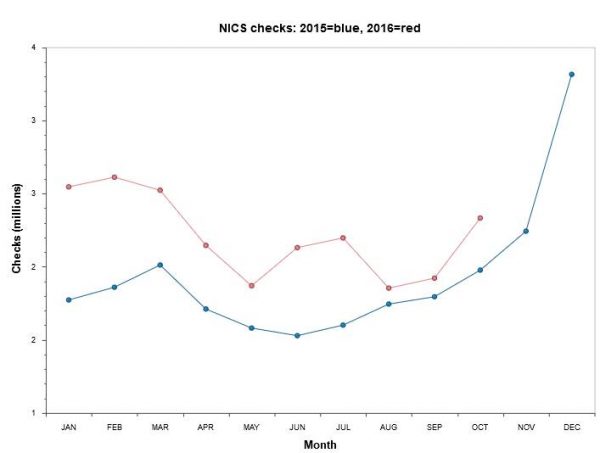 We will not know exactly how many guns have been added to the private stock in 2016 until late January, 2018.  The numbers will not be reported to the ATF until the end of 2016. The ATF is required by law to hold them from public view for a year, to prevent proprietary information from being released.

Given the NICS numbers, there will probably be 17 to 18 million guns added to the private stock in 2016.  That would increase the total number to 405 – 406 million private firearms in the United States.

The private firearm stock in the United States will have increased by nearly 100 million firearms, or 30%, during the two terms of the Barack Obama presidency.

If Hillary Clinton is elected in a week, I predict that we will exceed that number.  If Donald Trump is elected, NICS checks will drop. How much is uncertain.

The record rate of NICS checks picked back up in October, after slowing a little in August and September.

Who would have thought that President Barack Obama would be the record setting, all time champion, gun salesman?  The total NICS checks will reach over 250 million by years end.  That will be over 150 million firearms added to the private stock in the last 18 years.  Over 37% of the private firearms stock will be less than 18 years old.
©2016 by Dean Weingarten: Permission to share is granted when this notice is included.

I didn’t buy my guns for them to be taken… That contradicts why I bought them in the first place.

New gun owners and new permit to carry holders need to understand that just because they purchased their gun or obtained their permit to carry does NOT protect them from gun restrictions and control. Just because you have those things before the big restrictions start (if Hillary is elected), doesn’t mean you are safe. They can still take them away or make it so you cannot use them. The fight must continue to protect our rights. All gun owners and permit to carry holders need to join the fight. Vote for candidates that actually fight for your 2nd Amendment rights.… Read more »

What about when the NRA says to me we have given up on your state it is a lost cause? Nobody cares as we are a “LOST STATE”. I still support the NRA but they are not making me happy at all when they say and do these things. They should be flooding this state with lawsuits that overwhelm the court system to the point they are forced to repeal these ridiculous illegal, unsafe gun laws.