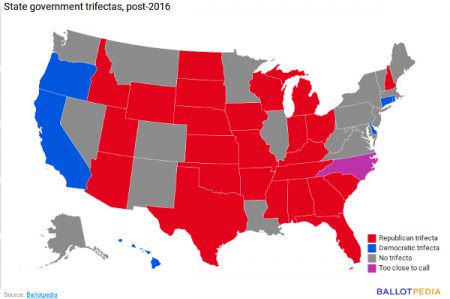 Campus carry reform is likely to advance in Arkansas in 2017. I expect it to continue to advance in the following years, across the nation. From kasu.org:

The ever-increasing Republican majority in Arkansas has a shot a passing some legislation that a toehold of Democrats managed to hold-off, or at least mitigate on occasion in the last session.

While the incident was initially reported as an active shooter, it turned out the man was armed with a knife, injuring eight people.

Adults have the right to bear arms.

The subset of adults who have gone though the trouble and hoops of obtaining carry permits are extraordinarily responsible, as shown by the statistics of their actions. They are more responsible than police officers.

Therefore, there is no reason to prevent them from exercising their right to bear arms on college campuses. They have shown how responsible they are in bearing arms.

There is no practical difference between bearing arms a couple of feet across the invisible line that demarcates the campus, compared to bearing them in the rest of society.

Guns in the hands of people who have demonstrated that they are more responsible than police enhance the security of people on campus.

The logic and premises of campus administrators are straightforward as well.  They advance a completely different argument based on their assumptions about reality.  It is:

Guns are bad and dangerous.

The Second Amendment does not apply on Campus.

People having guns on campus make life on campus more dangerous. They do not increase security or protection.

Campus administrators have had the power to determine who should have guns on campus. They should continue to have that power, because they are wise.

The above is correct, because campuses have lower crime rates than places outside of campus.

The assumptions are testable. There are current ongoing natural experiments that have been set up by state statutes and state supreme court decisions.  Those statutes and decisions have removed the power of administrators to place legal restrictions on campus carry. There are dozens of institutes of higher learning across the nation where this change has been enacted.

Those promoting campus carry do not claim that crime rates on campus will decrease with campus carry. They claim there is no logical or legal reason to restrict their rights.  If the permit carriers do not commit crimes on campus with their legal guns, their arguments are shown to be superior.

The administrators bear the burden of showing that concealed carry permit holders commit crimes with their legal guns on campus, once the administrators’ power has been removed.

The administrator’s argument is essentially an “appeal to authority”.  They are saying “We are wise. We should make the decision, not legislators.”

The results of the natural experiments support the premises and logic of those promoting campus carry.

The argument has never been about safety or security. It has been about control.  It is a basic argument about how society should be organized.

The campus administrator position is that society should be controlled by wise philosopher kings, which they conveniently, and not so modestly, proclaim and believe is their proper position, at least on campus.

Second Amendment supporters’ position is that government should be limited so as to preserve the freedom of individuals against people who would control them by force.  Individuals should control a limited government, subject to the rule of law.

Administrators gained their power over students on campus through two theories. In private institutions,  there is contract theory.  If a student is going to attend a private institution, the institution can place constraints on student behavior by means of restrictions agreed to in a contract.

In loco parentis has been discredited for institutes of higher education in the United States. Most students have become legal adults. The courts have held that students may not be disciplined for merely exercising their Constitutional rights.

The administrators of institutes of higher learning have had the theoretical base for their power removed by those two changes. Their attempt to use an appeal to authority is failing.

Republican legislators find the arguments of campus carry supporters persuasive. The theory of government that put them in power is supported. The “philosopher king” argument is debunked. It is not surprising that Democrat legislators support the “Wise Philosopher King” theory of power.  It is the basis of the “progressive” or “statist” movement.

With Republicans in complete control of 25 state governments, Campus carry reforms will continue to expand. Democrats have complete control in only six states.  Those states do not allow campus carry and are unlikely to pass reforms in the near future.

There have been few ideas more dangerous or inconsistent with the very idea of advanced education than the idea of arming everyone who wants a gun on a campus. Truly misguided and borderline evil.

Educators put into positions of administration have shown they are not worthy of the power. Sad to see America devolve to a “shelter in place” society when we used to confront the attackers and stand up to bullies.

What the hell does a “permit” have to do with it? “…shall not be infringed” is not followed by “except for those who don’t have a permit. Real crime, or the potential for someone to engage in actual harm to others, does not depend on the tool OR the presence/absence of a “permit.” Bare hands will suffice for an offensive tool in so many cases. So, would you be happier if hands were “licensed?” Would you then go on to write that those with a “license” for their hands commit fewer crimes than the police? Such utter nonsense. And the… Read more »