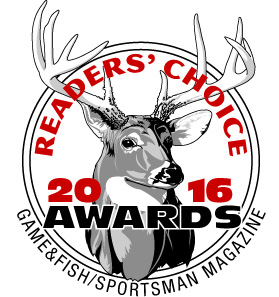 Kennesaw, Ga. — Readers of Game & Fish Magazine, America’s only national outdoor magazine with a focus on local hunting and fishing, chose 15 new products earlier this year as their favorites in the magazine’s fifth annual Readers’ Choice Awards. Trophies honoring the outdoor manufacturers will be presented at the 2017 Archery Trade Association (ATA) and 2017 Shooting, Hunting and Outdoor Trade (SHOT) shows.

Game & Fish, a nationally distributed magazine with over 400,000 monthly subscribers and newsstand sales, compiled the votes of more than 2,600 hardcore hunters. Results are published annually in the magazine’s July-August gear issue. They are also online at http://gafmag.com/rca-hunting-2016

In all, readers voted for new gear in 14 categories. Readers were invited to vote through magazine ads and online promotions. Game & Fish Magazine conducts two Readers’ Choice Awards each year, one for hunting gear and one for fishing.

According to the results, nearly all of those who voted had hunted last season. Half hunted for more than 20 days. On average, they hunted 39 days last year.

“Our readers are a wealth of hunting and shooting experience,” said Peter Gross, Publisher of Game & Fish Magazine. “If someone asked you whether you were an expert, advanced, intermediate or beginning hunter, what would you answer? Our readers overwhelmingly consider themselves advanced or expert because of their time in the field. That’s quite a resource for anyone interested in reaching top influencers around the country.”