USA – -(Ammoland.com)- “[T]he FBI has refused to conduct background checks on transfers as required by Question 1, and Nevada Attorney General Adam Laxalt has confirmed that until the FBI changes their position, his office will not be enforcing the law that was set to be enacted just days from now,” Don Turner of the Nevada Firearms Coalition reported in a late Wednesday email alert.

“[T]he recent passage of the Nevada legislation regarding background checks for private sales cannot dictate how federal resources are applied,” Kimberly Del Greco of the FBI’s Criminal Justice Information Services Division informed the Nevada Department of Public Safety in a Dec. 14 letter, meaning the FBI would not allow intermediaries to run background checks as required by the Act. Based on a resulting department clarification request to Laxalt on how to proceed, the attorney general concluded “citizens may not be prosecuted for their inability to comply with the Act unless and until the FBI changes its public position and agrees to conduct the background checks consistent with the Act.” (See correspondence here, posted by the Reno Gazette Journal.)

This is both an astonishing development as well as a setback for the Michael Bloomberg/Everytown-spearheaded edict ending (“legal”) private transfers in the Silver State. It shows once again that those demanding more disarmament are so eager to impose new gun laws they don’t even check to make sure new infringements will be workable in light of existing ones. 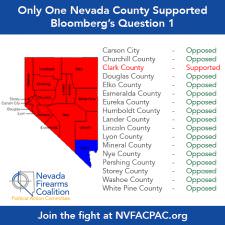 The Question 1 ballot measure was in itself something of a revelation about the scope of “fake news” surrounding the gun issue, as the “gun control” lobby and media narrative was that Americans, including most gun owners, overwhelmingly favored such measures. In reality, the heavily-funded Question 1 passed by less than one percent of the vote and failed in every Nevada County except Clark (see side graphic).

“Because of your support, we’ve been able to fight Question 1 at every turn, repeal handgun registration in Clark County, expand our rights under the Castle Doctrine, and support Campus Carry legislation, and we’re not done,” Turner wrote, concluding with a plea for support so Nevada Firearms Coalition can continue and expand on its work.

I try to avoid scribd … if possible.

So, I went to the source:

Now THIS looks mighty fine… a perfect textbook example of nullification. Nevada’s AtG is smart enough, and cares enough, to quickly find a good excuse to hang it on, and steps up to the plate, swings, and knocks it out of the park. Too bad Washington’s AtG Bob Ferguson the commie (and I mean that in the true sense of the word, the economic not the political) hadn’t the stones to do likewise. FFL’s in Washington are faced with the same thing, but so far NICS have not said they won’t dedicate their scarce manpower to be running BGC on… Read more »

Ferguson is a gun grabber!

I am not familiar with nevada law, but is anyone from nevada? What is the process for overturning the bloomberg proposition? Can another prop be put on the ballot in two years? Can the state house/senate pass a bill overturning it?

@Trumped..the legislature has to pass it into law, CC was on the ballot in Missouri, i think only 4 counties voted against it, it was defeated along the I-70 corridor ..110 counties approved it, when it went to the legislature, the Reps voted their constituents….the antis screamed they went against the will of the people..they didnt ! Kansas city and ST. Luis dont control the State…Las Vegas is the only county that approved the Nevada restriction, so the law makers should vote what their constituents voted in all the other Counties

according to the Las Vegas Journal, Clark County is the only county that approved the measure, all other counties voted against it..the measure won by 10,000 votes..the Legislative session begins Feb., 6 the people in all counties need to contact their Rep and vote against..if they dont..they get what they deserve

The rich liberal Goodie Two Shoeser types that push this sort of legislagive foolishness aren’t concerned with or about the loss of jobs, and as for the illinformed souls who are deluded into voting for such proposals, they seemingly lack understanding, and the critical thinking capability necessary to see past the smoke.

YOU SHOULD SEE..THE LIBERALS …AT RETIREMENT CENTERS AND OLD FOKE’S HOMES …TALKING TO OUR ELDERY …WHO CAN’NT EVEN HEAR OR UNDERSTAND …EVEN WHO THEIR VOTEING FOR….THAT WHAT OUR COUTRY HAS COME TO …SAD…FEAR MONGERING THE ELDERY…JUST TO MAKE UP VOTES….X..MARKS THE SPOT……AND A NEW STORY…STARTS WITH THE NEXT ONE….

Yup, those ‘ELDERY’ folks who are senile and post in all capital letters along with not being able to spell correctly. Ring a bell for you, Charles?

Has the law actually been enacted? I suppose that a state cannot compel the FBI, aka Fumbling, Bumbling Incompetents to take any particular, but that might well work both ways too. Otherwise, what did the people in Nevada actually vote in favor of, and in passing, was the thing posed in English or was it posed in “lawyerese”? More questions later perhaps.

Hilarious that benito bloomberg spent tens of millions of dollars on this without even realizing the law cannot be enforced. These clowns really are amazingly ignorant on the topics they have such strong opinions about!

King, Pierce, Snohomish and Thurston counties run Washington. A problem is central and eastern Washington voters could out number them, but they choose to not vote. Like when Dino Rossi lost the governorship by under 400 votes. People on the East side simply didn’t vote. Besides he ran a campaign focused on King county driving. The same dynamic effects the gun control vote.

People generally get the kind of government they don’t vote against.

People generally get the kind of government they didn’t vote against.

No; we get the government we ALL deserve. ‘We have met the enemy and he is us’ – Pogo. ‘If you don’t vote don’t crab’- Lucy Van Pelt (of the Peanuts cartoon strip).

Dino WON by a small margin until Queen Christine, desparately wanting the levers of power in HER grubby little paws, called for recounts… and a few thousand votes appeared out of nowhere that had not been counted before, and when a pile of overseas military votes came in after the “deadline” but had been postmarked well before that limit…. but were deemed inadmissible by some bought off judge.

Some people should have gone to jail over that recount……. but no one did.

there was one reported instance of a box marked 300 ballots, when they opened it for a recount, there was only 30 ballots in it, either those votes were counted 6 times each or Trumps votes were missing,

Looking at the red and blue map, mostly red indicating opposition, one wonders as to the following. Is Clark County the tail that wags the dog?

I mentioned this to my wife this a.m. and she asked why Bloomberg didn’t want people to have guns?

That should be easy to answer. He is an elitist control freak who thinks his agenda is the only way. It’s all about control of the people and not about reducing crime. It’s the liberal way.

Probably a question that should be addressed to Mr. Bloomberg.

So only his security forces are armed.

it cant be enforced anyway until their legislature passes it into law…and i believe most of the counties voted against it, the legislators would probably vote with their constituents.

Omceagain this shows the power of “tyranny by majority” through popular vote. ALL federal senators elected by the state and ALL ballot measures need to be approved by the majority of COUNTIES, not PEOPLE! One single population dense county in the state of Nevada controls the entire state. Big city problems do NOT apply statewide and elected officials or ballot measures imposed upon the entire state must be approved by the ENTIRE state, not the population. We need a change to our state level voting process to county majority vs populatiin majority. I have advocated for just such a change… Read more »

Your math is fuzzy. The population makes up the entire state. By the way, most folks don’t even bother to REGISTER to vote, much less cast a ballot.

My math isn’t fuzzy at all. Just as the electoral college allows lower population states a chance to influence the Presidential election, a majority county vote for state issues would allow lower populated areas a chance to be heard. Here in WA there are three counties that run the entire state. These population dense areas always sway the election of senators and the enactment of statewide initiatives. Prior to King county (Seattle) being counted this past November, our state was staunchly behind Trump, a Republican governor, Republican Assistant Governor, and moderately winning Republican Senator and two seats on the supreme… Read more »

Maybe the NV AG should audit the voter registration and the list of person who voted in the November election. Clark County includes Las Vegas where hotels and casinos employ vast numbers of low wage workers who may not be citizens.

I agree. You may find thousands of votes cast by illegals.

or by dead guys…. multiple times.

Take a good hard look at Clark County’s registered voter rolls……. I smelled BloomingIdiotBurg’s stinky fingerprints all over that campaign AND vote.

So, other states have passed like legislation (Oregon, Washington, etc.). Do they have the same issue with FBI resources to perform the background checks or were their laws written differently where this is not an issue?

Oregon State Police is an intermediary that uses the Federal NICS system to conduct the background check, thus they removed the Federal oversight issue completely plus they get paid for each transaction.

Washington forces us to go through FFL dealers, and pay subsequent fees. That is, IF you actually obey the unenforced law.