USA –  -(Ammoland.com)- I am an avid fan of “The Walking Dead” In fact it is the only shows I watch in real time to prevent myself from accidentally seeing spoilers posted to social media or overhearing who died at the water cooler. I am such a fan I even started reading the comic books so I can get an idea of what is coming.

Last season a new bad guy was introduced. He was billed as the ultimate bad guy. His name was Negan and he led a group called “The Saviors”. The Saviors would offer protection for half of everything the communities surrounding Washington DC had and you couldn’t say no to their demand.

The Saviors have a very strict set of rules everyone has to live by. Everyone has to follow these draconian rules except Negan and his other leaders of The Saviors. They also shroud their evil and a blanket of “for the greater good”

To quote Negan himself, The Saviors do what they do to “bring back civilization.”

Over the past few weeks I come to realize that this dystopian society I have been watching play out is actually a leftist utopia. Negan is the model of the perfect leftist government. I am beginning to think that Negan representation of the actual embodiment of progressivism is done on purpose. I do not claim to know the political leanings of showrunner, Scott Gimple, or creator, Robert Kirkman, but I think there is something there.

The first thing Negan preaches is collectivism. If you ask any of The Saviors who they are they will respond with the word “Negan”.

This brings be to my next point. Negan is almost worshipped as a god like figure. When he enters a room everyone has to kneel in reverence to Negan. Negan views himself as a Christ like figure. This matches up to what we have seen in North Korea with the Kims.

Leftist government always replace religion with worship of the state.

Negan comes to Alexandria (where our heroes live) and discovers they have records of every firearm. This is a classic example of a gun registration. Negan uses this list to confiscate every firearm from the people of Alexandria. Leftist government always institute a firearms registration before issuing confiscations. You can look to any number of leftist states to see this. From Cuba to the USSR this has played out time and time again. This is a great example as to why most of us on the right oppose a gun registration.

The next thing that Negan does is demand half of everything. This is actually better than what the leftist want. Leftist countries have taken as much as 100% of everything. Negan only takes half. If you don’t give Negan half then the punishment is swift is severe. This basically equates itself as a tax. In fact Spencer, from the show, even refers to it as a tax.

In one episode Negan kills one walker and uses that as justification for taking half of everything. This is another thing we see in all governments. The overcharging for services that would be cheaper of done by a private contractor. Think about those $800 toilet seats.

So we have determined there is no way to opt out, and if you don’t go along with Negan the penalties will hit you hard. There is an exemption though. Negan himself doesn’t have to follow the rules. He has made himself exempt from them. This is like the ruling class in any leftist government, or say a government exempting themselves from the affordable healthcare act.

So next time your liberal friend starts going off about “feeling the Bern” ask them if they want zombies. Because that is how you get zombies.

John is a NRA instructor and a constitutional activist. He is the former CEO of Veritas Firearms, LLC and is the co-host of The Patriot News Podcast which can be found at www.blogtalkradio.com/patriotnews. John has written extensively on the patriot movement including 3%’ers, Oath Keepers, and Militias. In addition to the Patriot movement, John has written about firearms, interviewed people of all walks of life, and The Constitution. John lives in Northern Virginia with his wife and sons and is currently working on a book on the history of the patriot movement and can be followed on Twitter at @crumpyss or at www.crumpy.com.

Nobody in this country really supports a “government ownership of everything” agenda anymore.

“Author: DKP
Comment:
Sounds like our presidential candidate one says believe me and the other was a liar so we are pretty close to being half of us work and pay taxes and suck us dry”

Personally I am tired of 35% of my income disappearing and going to certain people I would NEVER choose to give it to. . . ILLEGALS and Criminals.

I guess you’re not interested in any contrary view on this as you have deleted my previous comment. Was it the Nazi thing or the pointing out of your your support of the police state that got me banned?

It is still there. My reply is gone though

You’ve got to be kidding me. You’re one of those people who think the Nazis were a liberal movement . The only thing I agree with is that Negan could be compared to the Kims in North Korea and that’s only because they are pretty much the poster children for a totalitarian government. Let’s do a little critical thinking here. My guess is you’re no fan of the Black Lives movement and you have no issue with the police arbitrarily gunning down suspects with little or no cause. Those pimples on society deserved to be popped – right? Which view… Read more »

Actually I am for individual liberty and against violations for the 4th and 5th amendment. Everyone should get due process. The Police who patrol the streets as well as the people they encounter. As for the NAZI thing there is no clear cut answer. NAZIs and Fascism in general borrow parts of both right and left wing ideology. Remember the Italian Fascist party (which Hitler based a lot on) was formed after a split with the Italian socialist. So either side could be argued. There are entire books on it. Read “Liberal Fascism” then “Fascist Modernities: Italy, 1922-1945”. Go ahead… Read more »

Fair enough on the assumptions. I know that the Nazi party went to great effort to eliminate their biggest competitor which was the Communist party. Communism is pretty far left on the spectrum. Your analogy does seem to indicate that we liberals welcome our government overlords, which the groups outside the Saviors on the Walking Dead do not. Actually, I am quite opposed to government oversight of my personal life. I do however feel that the government can play a role in the welfare of the citizens by providing things such as education, healthcare, and clean water along with the… Read more »

The problem with your government is it doesn’t stop at protection, it want’s total control! Your government says it it protecting us from the evil gun. Guns are not evil, only the person using it can be evil, or they can be good and provide the protection the government can. Police do a great job, but if the police take 10 mins to get to my house, I will already be dead! It’s an old saying, but a very correct one – 9MM is faster than motorola! Education, the government has screwed that up to the point of us not… Read more »

Yes and the welfare, healthcare, education, and everything else that the government “supplies’ for you is paid for by the taxes that we serfs pay out. Which includes the $100,000 plus salaries that the government officials say they need to be able to survive while we poor serfs have to live on a few thousand a year.

@JGH Since when is “guessing” “critical thinking”?

TRUTH BE TOLD
Reply to  JGH

Blm…lol… little scumbag georgie soros terrorist group…. i did see where they were all out trying to stop traffic on a highway and one got struck by a car….. racist hate group no matter its original intent…. anytown they want to parade in should line their streets with citizens packing plenty of rounds and deny these terrorist entry into their town…… they dont march to solve problems but to become more militant against whites… Mr soros is counting on it…. when ford gave them 100 million do you see one cent going to poor blacks or into using it for… Read more »

The “Walking Dead” is a metaphor for the “Golden Horde.” Leftist parasites who believe they should live like the parasitic Elite on the proletariat’s labors.

The proletariat (/ˌproʊlɪˈtɛəriːət/ from Latin proletarius) is a term for the class of wage-earners, in a capitalist society, whose only possession of significant material value is their labor-power (their ability to work);[1] a member of such a class is a proletarian.

Janek – Yes, that is exactly how pussy boy Obama treated us! Do you understand executive orders? Guess not!

@Mac – You guessed wrong, but thanks for letting me know I live ‘rent free’. LOL

That may be the best analogy I’ve ever heard.

This is working perfectly in real time and real life. You want to see the real ideal progressive state, look at Venezuela right now. That is the Obama/ Progressive dream. 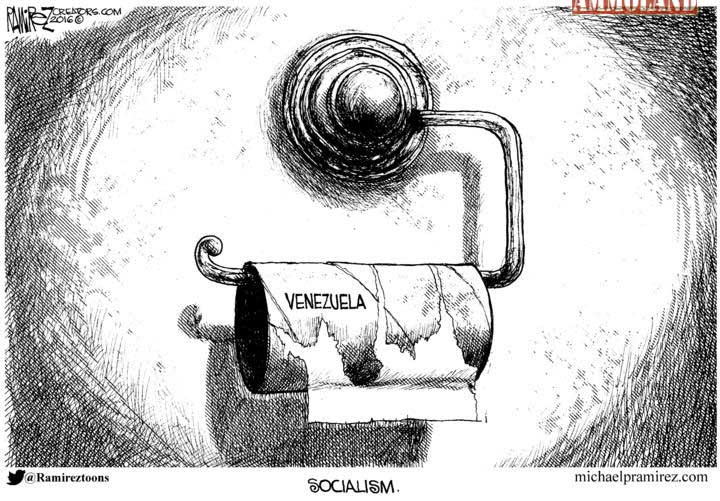 It all sound legit to me. Try explaining that to a liberal.

It would be easier fighting The Saviors

Want to know what it really is to be afraid? Let the government take all the guns away, then realize you really need them. Liberals to a T!