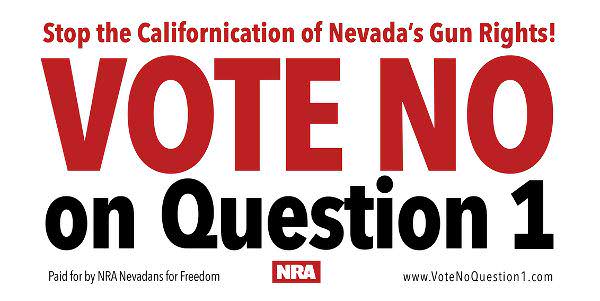 Arizona – -(Ammoland.com)-
The FBI has stated that it cannot and will not comply with the mandate prescribed by the “universal background check” referendum that was passed in November in Nevada.  The referendum was Ballot Question 1, a complicated eight page referendum that required private sales to be conducted through federally licensed dealers. From the Nevada Secretary of State archive.org: You can see that explicitly in subparagraph 3., the National Instant Criminal Background Check System, (NICS) is required to do the check, and *not* the Central Repository in Nevada, as is done according to Nevada law, currently.

According to Ballotpedia, the FBI has informed Nevada that they will not do the “background check” as required by the Ballot Question 1:

The FBI suggested that the Nevada Department of Public Safety’s Criminal History Repository (CHR) conduct the background checks of private-party sales and transfers. However, Attorney General Laxalt concluded that such a move would violate the initiative’s language.

The Attorney General, Adam Paul Laxalt (R) issued an opinion on the enforceability of the referendum. Taking into account the FBI’s unwillingness to be directed by the State. From reviewjournal.com:

CARSON CITY — A new Nevada law requiring background checks for private party gun sales was deemed unenforceable Wednesday, days before it was to take effect because the FBI refuses to conduct them and the state lacks authority to do so.

The opinion issued by the office of Republican Attorney General Adam Laxalt left gun enthusiasts elated and proponents of background checks reeling from the blow of another setback — the second since 2013 when a bill requiring universal screenings was passed by the Legislature but vetoed by Gov. Brian Sandoval.

Backers are now turning their sights to the 2017 Legislature, while others expressed hope that the state and FBI can work out a compromise.

It appears that Ballot Question 1 is a dead letter for the present. Under an Obama administration, the FBI might be pressured to “find a way” to make it work. It is highly unlikely that a Trump administration will be so inclined.

Michael Bloomberg should have spend another million or so to buy some high priced lawyers to vet the initiative  before signatures were gathered.

It is about 20 million dollars down the drain for the anti-rights zealot.

That is chump change for Michael Bloomberg.

If the performance is to be repeated, it will take another three years and more than $20 million.

@Ricochet, I think you have your finger on the pulse, here. Why not just repeal the Gun Control Act, and decommission the BATFE!

Why not just eliminate the need for background checks in the first place? We know it doesn’t stop criminals from getting guns, but clerical errors, lags in updating records, etc. often prevents law-abiding citizens from buying and it violates their Constitutional rights. Let’s just get national Constitutional carry on the books and then go to work on eliminating the taxes and registration on suppressors, automatics, etc. That technology is way older than e-mail, internet, Twitter, etc., so if the Constitution protects all those forms of free speech, it also protects all forms of the right to keep and bear arms.… Read more »

Keep resisting the Californication of the mostly free state of Nevada. Do not let the socialists in my state infect you with their drive to manage and control your lives, stripping away your rights in the name of their view of happiness.

Wonder when the FBI will decide they won’t allow BGC for any non-FFL applicants. Several other states have fallen under the blows of BloomingIdiotBurg and his corrupt minions. WHY do not FBI refuse to run private party sales for them, as well? Some of those states with new Bloom,burg Bills ONLY use NICS for all FFL sales…. now adding private non.FFL sales. Perhaps Mr. Trump can make an executive clarification that NICS checks can ONLY be run for sales of arms from the inventory of FFL dealers. Not for private party sales. I think it would be a great opportunity… Read more »