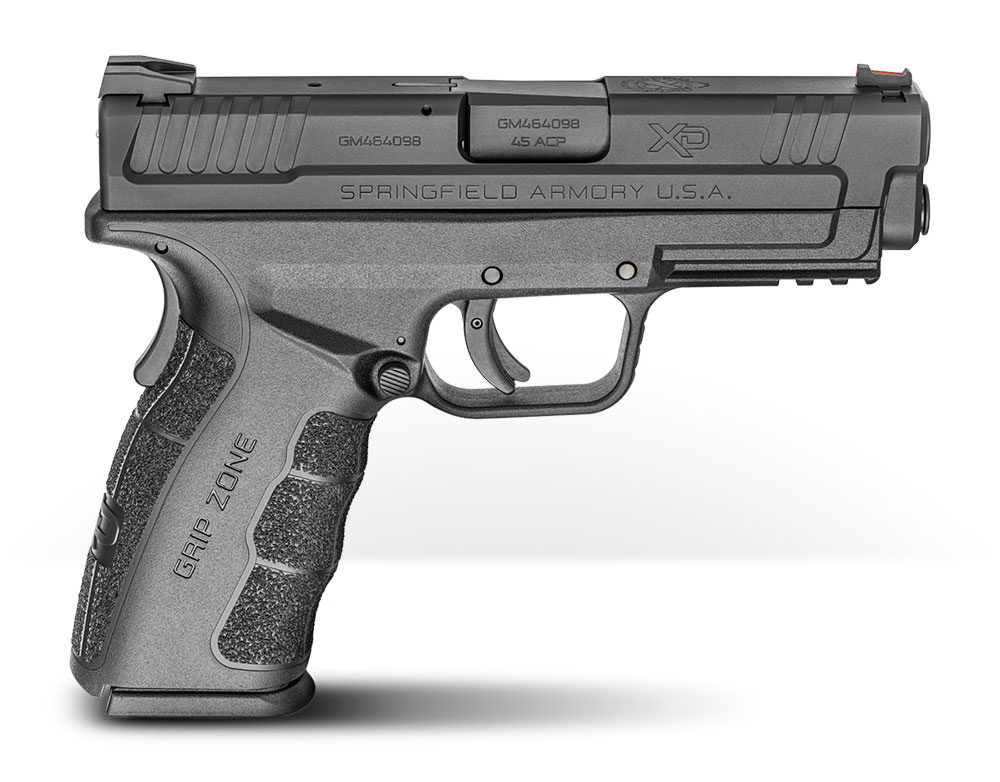 GENESEO, ILL. (AmmoLand) – Springfield Armory is pleased to announce the new XD Mod.2 Service Model, chambered in .45 ACP. Now, buyers don’t have to choose between large caliber and large capacity – this new handgun offers both in a surprisingly compact package.

While the new XD Mod.2 Tactical Model is optimized for competitive and defensive situations where concealment isn’t the primary concern, the new four-inch barrel XD® Mod.2® Service Model packs the same caliber and capacity into a carry-friendly footprint. The XD Mod.2 Service Model fits 13+1 rounds of fight-stopping .45 ACP into an amazingly concealable package.

“We’ve been listening to customers struggling with the caliber versus capacity debate,” observed Springfield Armory CEO Dennis Reese. “We decided to try and eliminate forced compromises and design a pistol that offers both big caliber and big capacity in a form factor that’s practical for law-abiding citizens to carry.”

Like its 9mm and .40 S&W siblings in the XD Mod.2 family, the new Service Model features all the great ergonomic enhancements that make the XD Mod.2 easy and safe to control and shoot. The HighHand beavertail and grip relief cuts position the shooter’s palm and fingers higher on the grip, thereby providing more direct control over recoil torque. The GripZone concept addresses every part of the pistol that contacts the hand. Three different surface textures are applied to just the right places to help shooters control the gun without the need to readjust the grip while shooting.

The XD Mod.2 Service Model is loaded with safety features under the hood. For example, our Ultra Safety Assurance Action Trigger System and internal striker block ensure that the XD Mod.2 won’t fire until the operator commands.

The new pistol, while a double-stack design, is no wider than many smaller caliber pistols. With a width of just 1.22 inches, overall length of 7.3 inches, and height 5.5 inches, it’s concealed carry ready. Unloaded weight, including an empty magazine, is 30 ounces. Every XD Mod.2 Tactical model ships with a travel-ready, lockable, hard case and two 13-round magazines.

When it comes to shooting performance, the XD Mod.2 Service Model is large enough to easily control and soak up recoil, but small enough to carry concealed.

Yet they still didn’t remove that goofy Grip Zone junk.

0
Recent Comments
Editor’s Pick
AmmolandTV
View All
We use cookies on our website to give you the most relevant experience by remembering your preferences and repeat visits. By clicking “Accept All”, you consent to the use of ALL the cookies. However, you may visit "Cookie Settings" to provide a controlled consent.
Cookie SettingsAccept All
Read More
Manage consent

This website uses cookies to improve your experience while you navigate through the website. Out of these, the cookies that are categorized as necessary are stored on your browser as they are essential for the working of basic functionalities of the website. We also use third-party cookies that help us analyze and understand how you use this website. These cookies will be stored in your browser only with your consent. You also have the option to opt-out of these cookies. But opting out of some of these cookies may affect your browsing experience.
Functional
Functional cookies help to perform certain functionalities like sharing the content of the website on social media platforms, collect feedbacks, and other third-party features.
Performance
Performance cookies are used to understand and analyze the key performance indexes of the website which helps in delivering a better user experience for the visitors.
Analytics
Analytical cookies are used to understand how visitors interact with the website. These cookies help provide information on metrics the number of visitors, bounce rate, traffic source, etc.
Advertisement
Advertisement cookies are used to provide visitors with relevant ads and marketing campaigns. These cookies track visitors across websites and collect information to provide customized ads.
Others
Other uncategorized cookies are those that are being analyzed and have not been classified into a category as yet.
Necessary Always Enabled
Necessary cookies are absolutely essential for the website to function properly. These cookies ensure basic functionalities and security features of the website, anonymously.
SAVE & ACCEPT
wpDiscuz