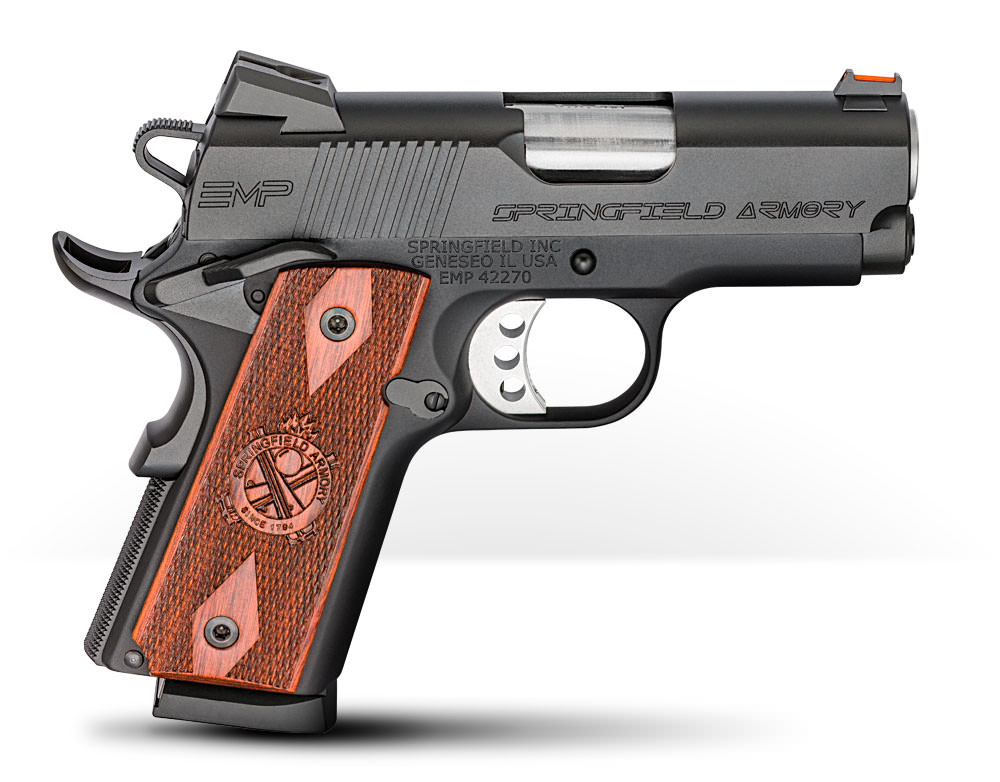 GENESEO, ILL. (AmmoLand) – Springfield Armory is pleased to announce a new member of the EMP Enhanced Micro Pistol family. Originally introduced in 2007, the first EMP pistol sported a two-tone finish – a matte black frame topped by a brushed stainless slide. Now, the EMP is available with a more discrete all black finish.

Like the original, the new EMP All Black features a forged aluminum frame treated with a black hardcoat anodized finish. The forged steel slide features the Springfield Armory Armory Kote finish – the very same treatment used on the high-end, combat ready 1911 TRP Tactical Response Pistol. The EMP looks like a safe queen, but is designed for daily carry and hard use. Frame, slide, and controls are carefully treated to stand up to moisture and daily wear and tear associated with holster use. Like the original, the EMP® All Black includes elegant thin-line Cocobolo wood grips, chosen not just for looks, but tough durability.

The EMP All Black features a three-inch stainless steel Match Grade fully ramped bull barrel offering superior accuracy. A dual spring recoil system supported by a full-length guide rod dampens recoil without sacrificing ejection and feeding reliability. The EMP All Black offers an ambidextrous safety lever also treated with Armory-Kote for protection against the elements and scratch resistance. The long Aluminum Match Grade trigger is factory calibrated with a five to six-pound pull weight, but the press and crisp break feel lighter due to the highly-polished action.

Like the original, the EMP All Black is far more than a downsized 1911. The patented short-action design, comprised of seventeen unique parts, makes the EMP a smaller, but equally reliable alternative to a full-sized 1911. Designed from the ground up for 9mm and .40 S&W, the EMP shortens trigger reach by one-eighth of an inch, sizing the gun for a wide variety of users. Springfield Armory designers created the EMP for absolutely reliability and function, but also for user ergonomics. Since its introduction, customers and industry experts have recognized the EMP as one of the most shootable pistols ever. That’s one of the reasons that the National Rifle Association’s flagship publication, American Rifleman, awarded the original EMP the prestigious Golden Bullseye Award when it was introduced in 2007. More recently, the NRA chose the EMP 4 Lightweight Champion to receive the 2017 American Rifleman Women’s Innovation of the Year Golden Bullseye Award.

Reese explains, “We’re committed to making the very best and most reliable products for self-defense. Nothing is more important to us than helping law-abiding citizens protect themselves and their families. That’s why we continue to innovate with our concealed carry product line.”

If you are reading the post correctly, it clearly states 9mm and 40 SW…”Designed from the ground up for 9mm and .40 S&W…”
As to MSRP, I don’t see it . However, it is just that ; a suggested price. Easy enough to find a price you can expect to pay online though.

Where is it available?

Available in what calibers? MSRP?

Zackley ! I hate posts that don’t post ALL the information on a product. I instantly loose interest. The two you mentioned are VERY important to a possible buyer.

Pretty sure these articles are written to peak your interest, not totally inform you about the product.