Note: This article was originally posted on NRA Blog: http://bit.ly/2lvMcgf

USA -(Ammoland.com)- Being the most populous state of the union gives the Golden State a few advantages: one of the largest economies in the world, an amazing tech sector, and some great weather to boot!

However, there are things about the Golden State I do not love, its guns laws being a major one.

I grew up around firearms and learned to hunt and to shoot at an early age. My father took over the family gun collection when my grandpa became sick. The guns were always in the hall cabinet – a constant tease to my future. Watching Tom Knapp and Jerry Miculek videos lit a fire under me and spawned the dream of shooting competitively. Throughout high school I was a member of a trap shooting team and that experience, the level of competition and the maturity that was gained, set me on the path to join the Marine Corps in 2012. The journey through boot camp, combat training, and then my duty station set my mind toward a more focused and fast paced level of shooting. In 2014 that mindset navigated me into the world of 3 gun shooting. 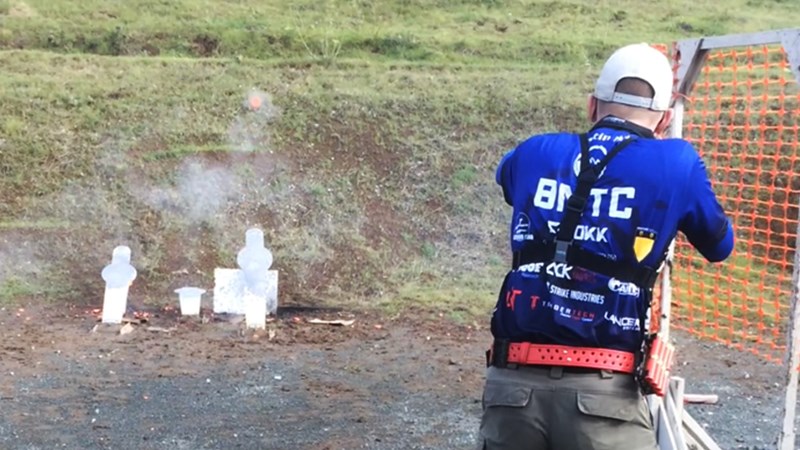 The competitive shooting community became my world and passion. I was dedicated, driven, and enthralled by it all.

So when Governor Jerry Brown signed eight new firearm laws into act in 2016, I read and re-read the laws trying to understand exactly how it would affect me as a competitive shooter. New “assault weapons” laws and magazine capacity regulations were a couple of the stated restrictions being enacted and not only would affect the shooting sports like USPSA, IDPA, and 3 gun, but our fundamental right for self-protection.

The so called “high capacity magazines” being stated would now target someone like my father who’s collection he’s had for more than 20 years are now being confiscated by the state with no compensation, the truest definition of tyranny.

The AR, which stands for Armalite Rifle regardless what the media tells you, is the most commonly used rifle in our country. These new laws officials in California were making would not only impact the lawful owners of them, but for myself and other competitive shooters who use these types of firearms for sport. Now banned in their common form.

Featureless rifles, magazine locks reminiscent of the 1994 Assault Weapons ban are going to the new norm, combining that with limiting magazine rounds is a huge detriment to the possibility of a California based shooter winning anything other than a state based match. Suddenly overnight the prospect of driving or flying to an out of state match almost impossible. All of the standard capacity magazines, base pads and extensions that are almost required to win a major match that we have previously owned, now turn us into criminals. Whether you own a firearm for competition, hunting, self-defense, or for recreational use, we all share one constant and unwavering truth – firearms have always and will always be a part of our lives and the sports we enjoy every day. However when unjust laws are put in place putting a black mark on every California gun owner, the conversation often turns to packing up and leaving the place many of us were born or have established our lives and families.

The five million members of the NRA are just a fraction of the tens of millions of gun owners in this country. There is no doubt that every one of us feel the same passion and pride for this way of life.

I work at a small family owned gun shop in Livermore, California. Many of us have exchanged hours of conversation about how to keep the business running, how to keep ourselves and customers safe, legal and happy, conversations about possibly packing up and leaving altogether, and even the future of the shooting sports and hunting in California.

Sadly, the efforts to push back have seemed to fall on deaf ears; petitions, meetings, marches and letters to state legislators have had no impact. Many feel as if the fight is a lost cause, no longer willing to push back anymore but rather contemplate moving out of state, and figuring out how to adjust and follow the new laws.

What these officials must know is that gun owners will continue to let their voices be heard. We look toward the national level for the assistance that we need and we as a unit will come together to show you just how ludicrous these laws you’ve put forward are.

Borrowing the style from the outspoken Sir Winston Churchill, “We will fight on the ranges, we will fight in the courtrooms, in the voting halls and the picket lines. We must fight and we will, for if we don't it means not only the end of a sport, hobby or passion; it means the end of a way of life for many of us.”

I pray that every gun owner shares the same sentiment. We need to be bold with our stance from Sacramento to Washington, D.C., and remind the officials who are inflicting on our rights that we stand firm, we stand strong, and we stand united to preserve our freedoms. It is the hard work and undying spirit of men and women like you and me to work towards preserving our constitutional rights and to keep our country safe. Semper Fi!

I live in the smallest State in the Union, Rhode Island. It is very, very liberal here. That said, it’s not all that bad for firearm owners. There are a bunch of small BS laws, but generally you can own anything you want, except full auto. We have been able to hold on to our rights by bringeth organized. It’s a small State so informal places to shoot are hard to find. That means most shooters are members of “Sportsmen’s Clubs”. We have a State coalition that all the Clubs belong to, that has a paid lobbyist at the State… Read more »

@MorganArms&Ammo I Too am supposed to be retired , I” ll never see 70 again I keep passing the DOT physical and there is a small company or two who call when they need a driver for the day. But what you describe is about where I live. Smack in the middle of fly over country. 5or 6 small towns 8-12 miles away just less 20 miles from the largest city in the state. Haven’t had a big flood in years, no mountains no forest fires occasional grass fires usually a ways off no mud slides a tornado once in… Read more »

@MorganArms&Ammo your reply appeared monetarily but disappeared before I got it read. Try again

By the way eric holder states that obummer is ready to get started REDISTRICTING . Speaking of California doesn’t that sound like the political problems some of the residents in that state are talking about ? Believe that’s called jurymandering and its illeagle but since when has that stopped that Kenyon?

Wild K TKS for looking out for me

Like the author, I live in the SF Bay Area of California. Only good thing is the weather. Outside of that everything else sucks; high taxes, terrible traffic, insane government, invaded by illegals and foreigners who don’t assimilate and failing infrastructure (anyone seen our dams lately?). Not to mention if we have a major earthquake….can’t imagine a recovery taking less than decades.

I’ve been looking to leave and would appreciate recommendations. Ruled out Oregon and Washington as they are becoming just like California, Nevada might be an option. I’m leaning towards Wyoming. Any suggestions?

Bryan you didn’t mention your areas of intrest or expertise or what your needs might be as far as employment housing etc.

@Oldvet, I can live anywhere as I’m retired and have solid sources of income. Would prefer a conservative friendly location where I can get between 10 to 20 acres of land. Ideally within proximity of a medium sized city (say no more than 20 miles away) with full resources. Prefer Western US as I have no familiarity with the east coast or southern US.

@MorganArms&Ammo, help the ICE deport more illegal aliens. Once you get the illegal alien voting population reduced, you may have a chance at electing people that represent your views.

Bryan Sent you a reply ammoland must be running slow again. I’ll check back to see if it shows up

Texas would be my first choice. There are lots of locations that meet your criteria. I lived/worked there for 5 years and would return in a heartbeat.

“If I owned Texas and Hell I would rent out Texas and live in Hell”- General William Tecumseh Sherman. ‘Nuff said.

What y’all out there in CA, and the other libtard states, have yet to figure out, or at least it seems you haven’t figured it out yet, is that we live a constitutional republic. Article VI (the supremacy clause) clearly states that U.S. Constitution is the “law of this land”. This fact is reinforced by many SCOTUS rulings including the landmark Marbury v. Madison (5 US 137) which dictates that: ‘No provision of the U.S. Constitution is designed to be without effect and that any statute, or part of it, that encroaches upon a right that is “secured’ by said… Read more »

Sadly the firearms community in Kali is fragmented and does not get engaged to help defeat these bills, although with Kalis socialist liberals super majority its can be demoralizing. Whether you hunt, shoot paper, want to defend yourself with either concealed or open carry, we need to rally together and get one other person to vote with us. Between the number of veterans and just registered firearms owners (yes there are more) we have a voice and can affect change.
Thank you for the well written article.

Sadly CA politicians won’t stop until only criminals have guns.