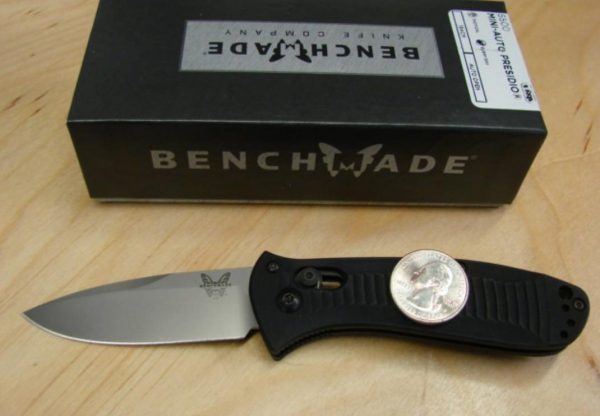 The law was a holdover from the 1950’s when bans on the ownership of switchblade knives swept the nation. The bans were based on groundless hysteria about their supposed use by street gangs. The play “West Side Story” was said to have a role in the passage of these laws.  A federal statute banning the interstate sale of switchblade knives was passed.  From the excellent article by Bernard Levine, published in 1990, which details how the ban came into existence:

Congressman Delaney’s mind was made up, so it probably would have been pointless to confuse him with the facts. Switchblades came into common use in the United States, not around 1950 as he stated, but around 1850. After the turn of the century, thanks to the inventive genius of George Schrade (and the “protection” of the Tariff Acts of 1891 and 1897), American made switchblades of all sizes became popular and commonplace.

Wikipedia has a good bit of the history on their article about switchblades. From Wikipedia:

In 1954, Democratic Rep. James J. Delaney of New York authored the first bill submitted to the U.S. Congress banning the manufacture and sale of switchblades, beginning a wave of legal restrictions worldwide and a consequent decline in their popularity. In 1955, U.S. newspapers promoted the image of a young delinquent with a stiletto switchblade or flick knife with lurid stories of urban youth gang warfare, often featuring lower class youth and/or racial minorities.[4]

All of the laws were pushed based on propaganda and unfounded assertions by a congressman from New York City.  It sounds eerily familiar to gun control efforts made during the last eight years. Bans on rifles such as the AR-15, that are used in a minuscule number of murders. Bans on rifles because they have a bayonet lug, even though bayonetting murders are never heard of.

Gun Rights has found that when legislators are educated about the history and effect of these knife bans, they can be persuaded to remove them.  In Virginia this year, the process happened fairly quickly.

Switchblade knives are just another tool that has been demonized by those who worship the power of the state.  It never made any sense to ban them. Knife law reform in Virginia awaits a Governor who is willing to move forward.

Just a Dem doing what Dems do. Dump him at next election.

Kansas do longer has a “Dangerous Knife law.” The only law statewide is a ban on sharpened shuriken or Kung Fu throwing stars.
In Kansas the law is simple, obey the Use of Force Laws and don’t illegally stab or slash anybody.
Open your knife with a flick of the wrist is OK in Kansas, balisongs are legal, out the front is legal, a 4-1/4 inch Spyderco is legal, the old concealed “dangerous knife law that made it a crime to conceal a blade longer than 4 inches” is no more.

None of the states busines what I own, or don’t. Just because some fool decided it should be a law does not make it right. The public should have the right to vote on such things, no what just a handful of idiots think something should be. I can remember when they finally passed a the drink law— what a bunch of idiots thinking they had the right to say whether we could buy a drink or not. 🙁