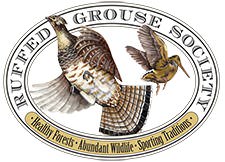 Walter previously served on the RGS/AWS staff as the regional biologist for Wisconsin, Iowa and Illinois and will continue with some aspects of this role going forward.

“As the nation’s leader in forest conservation, the Ruffed Grouse Society and American Woodcock Society are extremely proud of our habitat programs and the influence our regional biologists have on creating young forests for grouse and woodcock nationwide,” said RGS/AWS President and CEO John Eichinger. “Scott has impressive experience and accomplishments enhancing wildlife habitat and the motivation to make a difference for the future. I have no doubt he will help us take our habitat programs to the next level.”

This position is also responsible for broadening public understanding of the role of forest management in forest wildlife conservation.

“I’m extremely honored to assume my new role as director of conservation programs for the Ruffed Grouse Society and American Woodcock Society. Our mission of healthy forests, abundant wildlife, and sporting traditions is extremely relevant to the many challenges currently facing the forest wildlife community, and I’ve been thrilled to pursue this mission with our members and staff the past two years as a regional biologist. I look forward to continuing this work, and in helping support efforts by our outstanding staff of biologists to ensure healthy forests and sporting opportunities are available for generations to come.”

Prior to his work with RGS/AWS, Walter served as the upland wildlife ecologist and Farm Bill coordinator with the Wisconsin Department of Natural Resources from 2011 to 2015 and as an assistant/associate professor in the Department of Biological Sciences at the University of Wisconsin, Richland from 1999 to 2010.

He received his Ph.D. in wildlife ecology from the University of Wisconsin, Madison in 1999. His experience and accomplishments in the university, agency and NGO settings give him a unique and beneficial perspective that span the continuum from conservation policy development to boots-on-the-ground habitat practices, all things crucial for this new RGS/AWS position.

He resides with his family on their sixth-generation family farm in the Driftless Area of Wisconsin. He can be reached at [email protected] and 608-538-3840.

Information on RGS/AWS, its mission, management projects and membership can be found on the web.