The See3D Camo suit is an orange leafy suit that incorporates safety orange and “3D leaf” technology to greatly improve how the hunter’s outline blends into their surroundings. The new suit makes them invisible to deer, yet highly visible to other hunters.

Patented this year, the new hunting suit achieves two contradictory goals: improved camouflage to remain hidden from deer while increasing visibility to other hunters for safety.

“I was sitting in a tree stand with my Dad and we were both wearing bright orange for safety. I thought to myself, ‘We can’t be very hidden from deer, we have too much solid color, there has to be a better way to do this,’” says Peter, aged 13.

According to U.S. Fish and Wildlife, of the over 13 million hunters who take to the woods each year, more than one thousand are accidentally shot, many of them fatally. 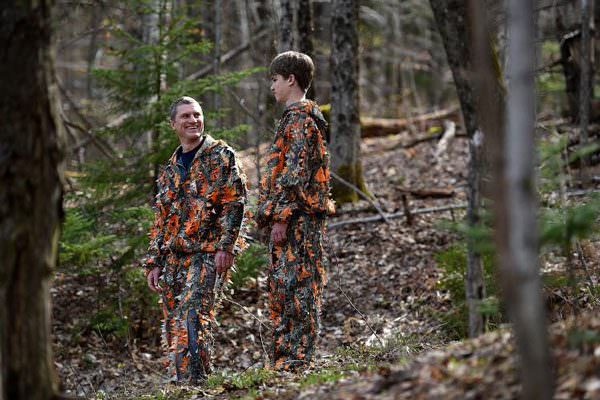 Forty-two of 48 states require hunters to wear “safety orange” while hunting to prevent accidents, but many hunters take off their safety colors while in the woods. The reason: big blocks of solid color don’t break up the hunter’s outline well enough, so deer spot them and run.

“If camouflage doesn’t work, hunters won’t wear it,” says Barrie. By combining a modern 3D leaf camouflage patterns and incorporating safety orange, the new suit makes hunters invisible to deer, yet highly visible to other hunters. “This suit should also help wildlife photographers or anyone else who wants track animals safely in the woods, as well, “ says Peter.

The new hunting suit will be available nationwide this summer, well ahead of this year’s hunting season.

For more information on the project, check out their KickStarter.

See3D Camo LLC is a Vermont-based company that specializes in camouflage for hunters. Its main product is the Blaze Orange 3D Leaf Suit. The camo suit was born out of safety concerns while hunting with children. It is a revolutionary new concept in hunting safety that uses 3D leaf technology on an orange base that allows the hunter to be highly visible to humans, yet invisible to deer.

My concern would be that the wearer might be more visible than game. Not all hunters are competent.

What or why would a patent be given on something that is already on the market?? I have been wearing camp orange hats and clothes for years and years. And what about the companies that already make camo orange Material??? Giving a patent on this is like giving a patent on bottled water!!! Fact is a person can wear just an orange hat including a camo Orange hat and they can be seen way better than and solid orange vest states make people wear . Why because a person wearing a vest stands behind a tree and that vest is… Read more »

Randy,
Penned like a true “died in the wool” PESSIMIST. I get the impression from your posting that you would fall into the “Grumpy Old Fart” category. Correction: “CHEAP” Grumpy Old Fart!

Wow I’m not sure you read the article at all. Yes it is a basic orange suit but it has a broken up pattern and there is a third dimension aspect to the suit. It definitely looks like there’s leaves coming off of the suit like a ghillie suit a little. If this takes off which I’m sure it will at least in New England that little bas**** is going to be rich and good for him!

As a Sportsman Education Instructor (Hunter Safety) here in NY, this looks like a product that potentially could prevent hunting shooting related incidents. In NY State there is no requirement to wear blaze/hunter orange but it is HIGHLY recommended.
Keep up the good work . . Safety First!!

We hope so too Mark!

Great idea, some states require 500 sq/in of solid on head and chest. Tennessee is not one of them, I’m a buyer when you start producing.

Thanks, Frank, we appreciate the support. Not least from Tennessee as my father-in-law hunts there!
We have done a state requirement analysis here:
http://see3dcamo.com/blaze-orange-requirements-for-all-states-where-can-you-use-see3d/
If you are inclined, don’t hesitate to pre-order from our Kickstarter project, We’ll be shipping in July, and ordering early gets you a discount!
Barrie

Barrie,
What area of the state does he hunt? People don’t realize how many deer are in this state. Granted we don’t have the “booners” typical of some northern states, mild winters no need to bulk up although 8s and 10s are common. If your into filling the freezer a good portion of the state have very liberal doe bag limits. A number of counties have a 3 doe a day (2 bucks per season state wide). Our season starts in mid September thru 2nd weekend January.