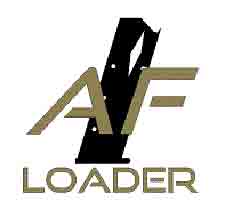 AFLoader is the first automated pistol “speed loader” and supports all double stack, single stack, and extended type magazines in 9MM, .40 and .45 calibers. The loader features removable ammunition hoppers, available in various capacities with as little as 100 rounds for a smaller desk footprint, to the largest consumer version at 2000 rounds.

Weighing in at only 5.5lbs, AFLoader is easily transported. The loader can be setup free standing with the included base and provisions on the back allow for wall mounting when a table or stable surface is not available.

AFLoader is fully programmable with built in memory. Up to 10 magazine types can be saved and recalled instantly through the digital display on the machine. The display also keeps a running count of how many rounds remain in the current hopper. The machine will operate on both 120v/240v wall power or 18V lithium battery packs, allowing a shooter to bring it along for a day at the range. At 2 rounds per second, AFLoader is faster than any handheld speed loader. The hands-free nature of the machine allows the shooter to continue training while another magazine is loading, never bringing you away from the action, even if you only have two magazines on hand.

AFLoader will be launching a crowdfunding campaign July 7th 2017 on Indiegogo. The base version, with (3) user selected hoppers, will be priced at $225 USD

AFLoader, located in Tacoma, Washington, is a start-up focusing on the advancement of automation in firearm gear and accessories, with the hopes of simplifying and enhancing the shooting experience. At AFLoader, we want to allow any shooter to train more efficiently and have a more enjoyable experience when shooting. We can be found on social media @AFLoader and AFLoader.com after July 7th, 2017.

The owner of a glider is a MAJOR FLAKE

Just look at the Facebook page of Bulletproof every one to see that customers placed orders and are some waiting in excess of 10 months for delivery
Question;
Isn’t this similar to what is called a Ponzi?

A must have for every pistol pack’n soccer mom.

Be Aware of Indiegogo. I gave money to Regis Giles for a project through Indiegogo that never materialized. No Product No Refund.

Has America really become the land of P*ssy’s? Is it really that hard to load a magizine these days? To me it’s all part of the fun of shooting and collecting the brass. When ever I intend to go shooting the night before I’ll load all my mags that I intend to take while watching TV. When I go thru those it’s then like a break in action to reload get a drink, change out or fix target. But then I’m Ex Military and used to doing things myself and apparently my hands are strong enough to push a cartridge… Read more »

Moderator. I wrote and placed a comment with the truth about my negative experience with Indiegogo and it being a scam and you refused to place it in the comments section. Is Ammoland also becoming a Liberal Progressive Demoncrap Commie Website that censures the truth? If that is the case, I will unsubscribe and persuade others to do the same.

Guess you haven’t read the details of Indiegogo. You are NOT buying anything you are DONATING money and IF they get things launched they HOPEFULLY will give you some predetermined “premiums” for the cash you gave them. NO expectations and it says on on EVERY page of both sites. Expecting to “buy the item” is tantamount to not reading the fine print. Indiegogo and Kickstarter are start up finding sources NOT Ebay on discount they are ONLY there to help companies start up and IF the people who sponsor them are lucky they get something in return Indiegogo and Kickstarter… Read more »

If it is not out yet, wait till it materializes. DO NOT GIVE ANY MONEY TO INDIEGOGO. Through Indiegogo, I gave $25 to Rigis Giles of “Girls Just Want To Have Guns” for a movie and nothing materialized. I did not get a DVD that I was promised and I lost my money. If they do not have money for the project, then let them get a loan to pay for it.

Ranges could have these at the stations. It would be able to reload while you shoot.

I wonder how much they cost ,
Also will they do Ar15 and pistol that would be great.