The contest is in full swing, and ends at 12:59 p.m. on July 4, 2017. Contestants enter by tagging a friend at Bigfoot Gun Belts contest. There are over 15 ways to enter.

The winner will be selected July 5, and announced on Bigfoot Gun Belts’ Facebook page. An email will also be sent to notify the winner directly.

Bigfoot Gun Belts are known for supporting a large holstered firearm without the sag that comes from a typical belt. The highest quality English bridle leather surrounds a spring-steel core, and evenly distributes the weight of the firearm.

The support of a gun belt without sag is crucial to everyday carry, because it keeps the holstered firearm in a consistent position. Consistency ensures the firearm can be drawn and holstered faster and with ease.

The gun belts’ versatile appearance allows for a variety of work settings. The hardiness of the American-made gun belts also
mean they will hold up under the weight of tools and other everyday carry accessories.

Bigfoot Gun Belts’ Rob Russo is excited to give people another reason to look forward to Independence Day.

“We felt, what better way to celebrate freedom from sagging pants than a Fourth of July giveaway?” Russo asked, “Plus all our belts are made in America, so it’s a perfect combo.”

Nestled between the pines of North Idaho, Bigfoot Gun Belts is proud to call the Inland Northwest home. This privately owned
and operated company produces only the highest quality gun belts at an affordable price.

For more information about Bigfoot Gun Belts, visit their website.

No worries mate. NEVER buy from them.

This feed didn’t show up until THIS MORNING JULY 5!
Kind of hard to participate if we don’t know about it till it’s too late!
Who’s at fault in this? You or all our different email servers?

Steve; when you say feed, I assume you are talking about the daily email. All the articles in every morning email are a recap of what we published the day before, always have been. We can’t populate the email until we publish the articles. If you are relying on the email you are a always a day behind our high volume of publishing. That is usually not an issue, but in this case the article’s had a very specific purpose, of a giveaway on one particular day, very tight timing. If you are not reading the site directly you will… Read more »

WTF? This was a Independence day giveaway that was published on, wait for it… INDEPENDENCE DAY, July 4th 2017! Where where y’all’s yesterday when you could have entered? 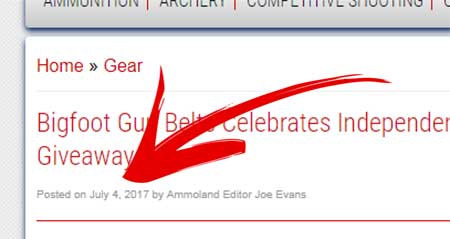 A day late and a dollar short! Performance on par for AMMOLAND News. I read it just to remind myself of why the anti-gunners think most of us are fools.

WTF! Is this a joke?

Very sad, that the contest is over prior to the announcement of it.
Is your companies Marketing budget really that small? what a couple strips of leather cost you?

I find it quite lame that this is published/put out on July 5 – THE DAY AFTER THE GIVEAWAY ENDS!!!!!