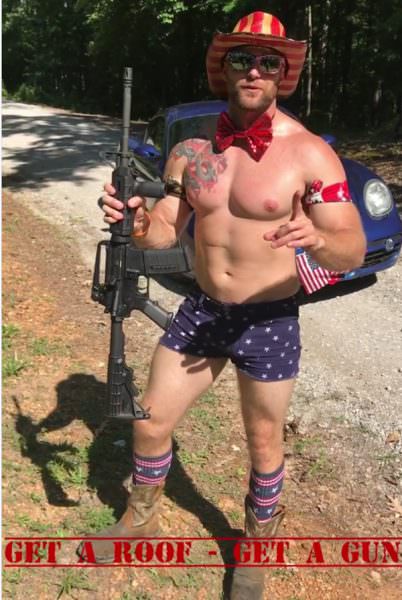 Arizona -(Ammoland.com)- In the video below, the Weatherproof Roofing and Exteriors company is offering guns as an inducement for purchasing their products. With the final payment for a roof replacement and exterior repairs due to a hail or wind storm, you get a “free” gun.

As with all promotions, the “free” gun is paid for by the customer, one way or another. It is part of the advertising cost of running the business.

But people like to get something substantial in their hands, other than money.  A promotion helps to facilitate transactions where the buyer wants the promotional item, but is not quite willing to purchase it outright. A rifle or shotgun can easily meet that criteria.

Why are we giving away AR 15s with every completed roof and exterior home repair? Because it symbolizes, at our core, who we are; True American Patriots. Just like the AR 15 we’re promoting, our roofs are built for Americans, by Americans. We chose the AR 15 for this promotion because, for patriots like us, its true representation is the high cost of freedom we enjoy in these United States.

The natural question is, “Why give an AR 15 to civilians?” The answer is found in the beliefs that shaped our nation by our founding fathers; that a well-armed population is the best defense for protecting your life, liberty and happiness.

The leaders of Weatherproof Roofing & Exteriors are Bible-believing, gun-owning patriots that believe gun ownership is both a privilege and a right.

There is a long history of using guns as an inducement to sell products in the United States. In San Francisco, in 1887, the San Francisco Chronicle gave away free .38 caliber revolvers with newspaper subscriptions.

The Harrington and Richardson double action, chambered for the .38 S&W caliber, was a solid little gun that gave good service. It was valued at $3.90 at the time, a little less than .2 ounces of gold. Guns have been given away for opening bank accounts and for buying trucks and cars.

Every gun promotion that I have investigated has been a greater success than the promoter thought it would be. There are numerous reasons for this success.

It is usually better to be a contrarian, doing something that makes you stand out from the crowd. A gun promotion fits this criteria, giving the marketer significant publicity for free. In addition, the popularity of guns has been downplayed by the Establishment media.

This gives those who go against the narrative that “guns are bad” an advantage, because they appeal to the large majority of Americans who believe, contrary to the narrative, that guns are valuable, and thus, good.

Weatherproof Roofing has a winner with this promotion.  The promotion has been so successful that the business is in the process of expanding his company.

@OV, Well, at least that dude does not dress like some moslem or liberal/leftist/rainbow “person”, but… I don’t think that he would last a day in the hot Texas sun throwing small bales onto the hayrack.

Yes, that bank in Michigan that gave away rifles rather than interest is the North Country Bank and Trust (they go by some other name now). My CD will be maturing in a couple of years. Best deal that I ever got from a bank.