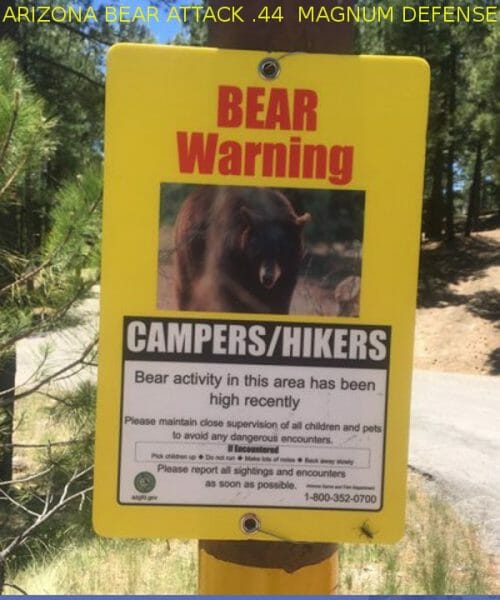 Arizona -(Ammoland.com)- Over 20 years ago in 1996, I was driving to Phoenix, Arizona to catch a flight to Wisconsin.

I had the radio on. The news was reporting a horrific bear attack on Mount Lemmon, near Tucson, Arizona. A teenage girl had been badly mauled by a bear, in her tent, as part of a 4-H outing.

A camp counselor had accessed a handgun and shot the bear, driving it off.

As the hours rolled along, the AP stories started getting vaguer and the story less heroic.  The Internet wasn’t well developed in 1996. It took me several years to track down the “camp counselor”.

Then, the notes and email were lost. Finally, in 2017, I made contact again.

The “camp counselor” who shot the 356 lb black bear off of Anna Knochel was Brett Kramer.  He was the supervising adult in charge, an employee of the University of Arizona, in his official capacity as an Extension Agent. The details used to fill in and correct newspaper accounts of the time come from my interviews with Brett.

In 1996, it was the twilight before dawn when the big black bear entered the girl’s tent at 5:15 in the morning of 25 July. He pinned 16-year-old Anna Knochel down and started biting and tearing at her. Anna did not make a lot of noise.

She tried to protect her vitals and managed to get on her stomach.  The bear bit at the back of her head, her shoulder, and back. It tore her leg open from the buttocks to the knee. There were extensive claw wounds from her scalp all down her back.

It took minutes for people in the camp to be alerted that a bear was attacking Anna in her tent. More time went by until Brett Kramer was told of the attack. He was in charge of 13 counselors and 71 children at the camp. Anna was one of the junior counselors.

He grabbed a flashlight and a canteen and ran down to Anna’s tent, 50 to 60 yards away from the storage building where he was sleeping. He saw movement in the tent as he approached. He opened the front flap. Anna’s cot was on the right. The bear was on top of her. He banged the canteen with the flashlight. He shouted. The bear didn’t leave.

Brett remembered his .44 magnum, under the seat of his truck, two hundred yards away. He ran uphill, back to the storage building to get his truck keys. Fortunately, it was on the way to the parking lot. After a 150 yard sprint uphill to the truck, he grabbed his blued Ruger Super Blackhawk with a 7 1/2 inch barrel.

The pistol was loaded with six lead semi-wadcutter 240-grain bullets in .44 Magnum handloads. Brett is and was an avid reloader. He said the loading manuals put the load at about a 1000 feet per second, a hot load for a .44 Special, but mild for the .44 Magnum.

The pistol had been taken to camp by mistake. Brett had grabbed his pack, and the pistol happened to be in it. He was already on his way when he discovered it, so he locked the revolver in his truck when he got to the Boy Scout camp on Mount Lemon. It was legal to have the pistol in camp, but Brett wanted to keep it separate from the children he was supervising.

Other counselors tried beating on the tent and making noise. The bear was in full predatory mode. It ignored the disturbance.

Brett ran back to Anna’s tent, about 200 yards, downhill. When he got back, the bear was still on top of Anna.

The first shot was from the front. It went through the shoulder and clipped a lung on the way to the abdominal cavity.  The big boar immediately took off. Brett hesitated a moment for a clear shot, then fired again at the retreating bear, hitting it in the hindquarters.  It was light enough to see and shoot. The sun would rise in a few minutes. Brett was 29 years old.  He had just gotten a lot older.

A couple of hours later, two Pima County Sheriff’s deputies were able to track down the bear. It was lying down, mortally wounded from Brett Kramer’s handloads. They made sure with a couple of 12 gauge shotgun slugs.

Brett was able to attend the necropsy of the bear.

Anna Knochel was 16 and in excellent physical condition at the time of the attack. She was a high school swimmer and a cheerleader. The damage the bear-inflicted was extensive. On the day of the attack, she was in surgery for 12 hours.

It was the first of several surgeries, including an experimental transplant of a nerve from Anna’s left leg to her severely damaged right leg. After months of reconstructive surgery and physical therapy, Anna was able to walk again. She eventually obtained an advanced degree, married and has a young son of her own.

The bear that attacked Anna was a known problem bear. Arizona Game and Fish, the University of Arizona, The U.S. Forest Service and the Boy Scouts were sued by the Knochels for negligence. A settlement with Arizona Game and Fish was reached for a reported 2.5 million dollars. The lawsuit had repercussions far beyond Arizona. I have not found results for the other defendants.

All over the country, departments responsible for the management of wildlife changed their policies. Problem bears were no longer treated to “catch and release”, especially adult boars. Moving a problem bear moves the problem to someone else. Bears that become acclimated to humans, and associate them with food, are a problem. In modern parlance, a fed bear is a dead bear.

Research on black bear attacks showed that when a bear intends to eat you, fighting back is better than playing dead.

The Mount Lemon bear attack case is one of many where bear attacks have been prevented or stopped with handguns. The calibers, so far, have ranged from 9mm to .44 magnum. Research is ongoing. I hope to have an updated article soon.

If you find an instance where the use of a pistol failed to stop a bear attack, please let me know.  Such failures should be out there. The mythology is that such failures are common. I have not found one yet.

The next few years should produce some interesting news/data from British Columbia, Canada. They have totally banned the taking of grizzly bear, except by natives for food and ceremonial purposes. As far as I understand, it offends current sensibilities, at least for the folks who live in the cities near the U.S. border. No hand guns allowed for anyone. For tourists, one can get a permit for a long gun, but it’s a process. So, if planning on camping in rural B.C., be faster than your camp mates.

Ok hikers, here is your whistle and pepper spray for bears.
Sir, how do we know that there are bears in the area?
Well, look for their scat (poop).
How do we know it is bear poop and not some other animal?
That’s easy, the bear poop has whistles in it and smells of hot peppers.

So true. I know people who have run black bears away with the sound from a sun gun. I might try it on curious bears, but would have a high powered hand gun drawn. To a bear we look like chicken.

Use what works. Forget spray and carry a gun that you know how to use.

If you only carry bear spray in bear country instead of a gun you need to make sure your medical and life insurance is fully paid and current; you’re most likely going to need it if you are attacked.

We love to camp in the high mountains in the summer. Bears have come into the campgrounds, usually trying to break into trash bins. Though never having had a direct encounter with a bear, I always kept my 45 loaded with +P hardball. I really don’t handle a 44 very well. Some folks make the stupid mistake of wanting to take close up photos or try to offer food to bears. Both are dangerous and foolish acts that could cost you your life.

“Some folks make the stupid mistake of wanting to take close up photos or try to offer food to bears. Both are dangerous and foolish acts that could cost you your life.”

This comment is also true to the bears life. Feeding bears is generally illegal and acclimating bears to be social(photos/food)definitely puts the bear in a position of cant win. Bears are wild animals and should be treated as such both for humans safety but also that of the bear.

In bear country carry bear spray and be trained in how to use it. Person properly qualfied with fire armes should have a gun avable.For bear spray information go to bebearaware.org see power point Bear Spray Works and it’s easy to use.

Thanks, excellent comment. I would NEVER trust my life to a spray against any apex predator.