Helping Hunters Eat What They Kill at the ATA Show 2018

The FireDisc® team are all outdoor enthusiasts interested in bettering the hunting experience by providing a quick and simple way to help people eat what they kill.  FireDisc not only manufactures the most robust cooking tool on the market, they have designed the cooker to be a portable, with a quick set up, take down and clean-up process for those who are not willing to sacrifice their taste buds to freeze dried foods in the field.

Ideal for hunters, fishermen, campers, tailgaters, RV enthusiasts and outdoor lovers of all kind, FireDisc® fires up quickly, cooks almost anything, seasons better than a cast iron skillet and is easy to clean with only water. It is easy to operate and has the ability to cook multiple foods at one time on its extra-large cooking surface area. FireDisc is available in either tall (36”) or short (24”) and in red or black. FireDisc® staff will be on hand at booth #3617 eager to show ATA attendees all the fascinating FireDisc functions.

FireDisc® Cookers will also be a part of Outtech’s Innovations on Wednesday, January 10th, starting at 6pm at the Indianapolis Convention Center where they will have a one-night only “Beginner Package” for new retailers. Don’t miss this opportunity to increase store profits while providing your valuable customers the best portable cooking tool on the market.

Stop by the FireDisc® booth – 3617 – during the 2018 ATA show at the Indiana Convention Center January 11th-13th to see FireDisc Cookers! 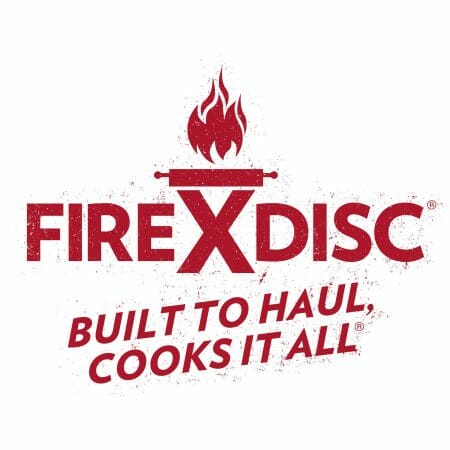 New Retailers: contact an Outtech Sales Representative near you https://www.outtech-online.com/contact-us.

Texas-based FireDisc Cookers specializes in the design and manufacturing of the world’s most the innovative, high-quality and versatile, portable outdoor cookers and accessories. The company was founded by two entrepreneurial brothers, Griff and Hunter Jaggard, who, armed with a makeshift tractor plow disc, set out on a mission to build a cooker worthy of everyone from the world’s top chefs to hunters, fishermen, backyard family grill masters, tailgaters and campers. FireDisc® Cooker products are currently sold nationally and online throughout the globe.

Heavy-duty, ultra-high carbon steel construction renders the cookers indestructible, while meticulous design yields convenient portability and ease-of-use. A rigorous Chef-Tested/Chef-Approved quality assurance program enables the cookers to deliver unmatched cooking characteristics, as vetted by some of the world’s leading chef’s. Prior to their launch of FireDisc® Cookers, the founders formed a non-profit to raise money and find a cure for Multiple Sclerosis. To date $1M has been raised via The Carney Men Bike MS team. For more information, visit http://www.firedisccookers.com.

I would buy one of these in a heartbeat if only they had an optional carry cover.