U.S.A. –-(Ammoland.com)- I was looking online for an old Aaron Tippin song I heard back in 1991 during Operation Desert Storm. The song was “You've got to stand for something or you'll fall for anything” ( www.youtube.com/watch?v=XHIw6vs4z0w ). What Mr. Tippin was trying to tell the world through his song was sometimes things were just too important to be on the sideline and not engaged. Sometimes you have to pick a side and stand up for your side–perhaps going against the flow that is supposed to be considered normal.

In the words of the song Tippin tells how his father had to make hard decisions in life based on his beliefs and while he may have been right, there is always an opposing side that rejects your opinion and may even attack your ideas. You must however, continue to stand on your principles.

“If you don't stand for something you will fall for anything,” Malcolm X.

In the US military you are taught to stand and render the proper customs and courtesies (in most cases a hand salute) to a person senior to you or to the flag of our nation.

But, what if you do not like that SOB of an officer coming toward you as you move down the sidewalk on base? Do you walk across the street to avoid being forced to render a salute to someone you dislike or maybe even detest? Do you duck into the nearest building to make a point that “no way are you going to give into mandatory respect”?

WWII Army combat veteran Major Dick Winters, made famous by the Band of Brothers HBO series, is quoted saying “You salute the rank not the man.” This after an officer who had once out ranked Major Winters failed to render the proper salute to the now senior Major Winters.

I can think of a number of very senior officers I worked for on active duty that I have absolutely little to no respect for because of their public and their private actions. This does not mean, should I encounter them while in uniform, I would not render the proper courtesies. Salute the rank not the person, no matter how distasteful they are to you. Don't disrespect the military uniform they wear, because of your personal dislike for them.

Don't disrespect the flag of your nation because you dislike some of the officials duly elected to run the country. Politicians and controlling political parties come and go in the power struggle to lead our nation. What does not come and go is our Constitution and our flag. They are both a constant in the life of our country and in the safety of our nation.

When I raised my right hand to join the US Air Force I did not pledge my loyalty to a person or a political party. I pledge my loyalty to defend the Constitution of the United States of America against all enemies, foreign or domestic. People come and go, the nation must always stand fast.

Mr. Imperato, at Henry Repeating Arms, has added a wall plaque to his on-line catalog titled “We Proudly Stand.” Three words that say it all. Stand for what you believe in, stand for what is right and good, and most importantly stand for your country.

There are always those who see the worst in any situation, “we are lost, we are adrift, we are not the society we once were”. There will always be change and change will always bring fear, usually fear from misunderstanding. The constant we can rely on is the Constitution and the flag of the United States is the most visible remember of that constant in our challenging lives.

Consider a Henry Repeating Arms “We Proudly Stand” wall plaque. A small plaque that stands for a much larger meaning.

For those who doubt the direction of the nation please take comfort in the fact:

“We are not lost–we are in America.” 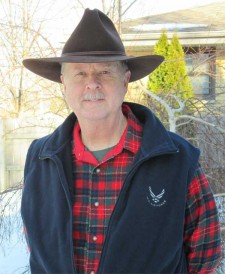 Major Van E. Harl USAF Ret., a career Police Officer in the U.S. Air Force was born in Burlington, Iowa, USA, in 1955. He was the Deputy Chief of police at two Air Force Bases and the Commander of Law Enforcement Operations at another. He is a graduate of the U.S. Army Infantry School.  A retired Colorado Ranger and currently is an Auxiliary Police Officer with the Cudahy PD in Milwaukee County, WI.  His efforts now are directed at church campus safely and security training.  He believes “evil hates organization.”  [email protected]

In God i trust first and defend my family with my Henry big boy 44 magnum caliber. And my bare hands god gave me.