There are three different firearms he talks about, with one being split into two subsets.

Shotguns are easy to operate, and have a high lethal impact, but they are not as maneuverable as a pistol, and they have limited rounds. It is unrealistic to expect to be able to reload a shotgun quickly if needed for home application.

Handguns are smaller, very maneuverable, and easy to operate, however, they require a higher skill to be accurate, and are harder to master, and hold roughly half the ammunition as carbines.

Carbines, in his opinion, are the best option for home defense, due to the high lethal impact, high round count, and accuracy, however, they are not as maneuverable.

No matter what your decision is, Larry still feels that you need to obtain a good skillset with a handgun, as you may have to rely on it as a fallback. You may need to transition to a handgun at some point while using a carbine or shotgun, so you need to be aware of that and how to effectively use a pistol. 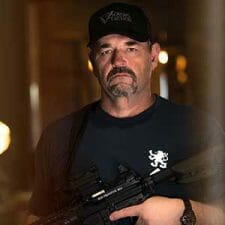 Larry Vickers of Vickers Tactical is a retired US Army 1st SFOD- Delta combat veteran with years of experience in the firearms industry as a combat marksmanship instructor and industry consultant. Larry is the firearms and training community advisor for CCW Safe.

I have all of those mentioned loaded at my disposal but my go to home defense is still my EDC glock19 w/16 rds and crimson trace green laserguard. I would NOT worry about 16 rds not being enough for a home Burglary. Now if it was a national disaster thats a different story & I don’t live in a place that I need to worry about rioting.

Agreed. Shotguns are hungry beasts that require significant skill, pistols are inferior secondary weapons that are absolutely necessary, and carbines are far superior to both.