Since their invention, they have become wildly popular with outdoorsmen of all types. Survivalist, hunters, fishermen, backpackers, climbers and probably even the lowly birdwatcher. I’m not paranoid, but, I think you always have to be ready. If some little terrorist tries to take over plane I’m on I carry wire ties so he/she can be contained. The Outdoor Edge PARACLAW bracelet would be another good option.

Then also it could be helpful to have one while in the backcountry. I remember one September Colorado black powder hunt over in the Rawah Wilderness Area the weather turned South. A snowstorm blew in and snapped our tent poles. It would have been nice to have had some parachute cord to brace our tent.

Or if you shoot an elk you can quarter it out and tie it up in a tree to keep the bears and wolves from eating it. Tying it up also helps keep it clean and cool. I tie limbs in front of the meat to provide shade and to keep ravens from seeing it.

There are a million options for use of paracord while out in the backcountry. Let’s list out a few reasons to wear an Outdoor Edge Paraclaw bracelet:

We could set in our armchairs and dream up a million uses but you get my drift. I’ve found when you’re in some dire straits in the backcountry you can get pretty creative. But you need some tools at hand to work with.

The Outdoor Edge Paraclaw is unique in that it also has a cutting tool included. It is shaped in a claw design, hence the name Para”CLAW”. I assume this was done in case you had lost your knife, you could still cut the cord to the desired lengths.

I noticed paracord bracelets became popular a few years ago and thought they were an ingenious invention but thought I’d research their history a little for this article. 550 parachute cord is derived from cord that it is rated at 550 lbs. Parachute cord has been around for a long time. I remember as a kid it was a big score if you found a good deal on some in the old Army/Navy store. They sold it in big rolls. But the last 25 yrs. most people carried a roll of the thin nylon string. Paracord is better for tougher tasks.

Everyone has a paracord bracelet now don’t they?

Who knows, Hillary Clinton probably even wears one so she can rappel out of her soon to be prison cell! 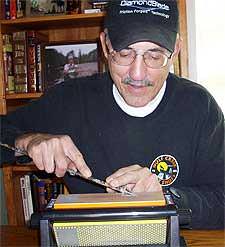 I wore a paracord bracelet for quite a few years. But, they end up stinking like old shoes. Alcohol baths and old toothbrush scrubbing became tiresome so now it/they reside on the shoulder straps of my get-home and bugout back packs. (and a keychain). Already have knives and etc in those packs so…

I guess there could be a case made for redundancy.