Bob Irwin highlights the latest self-defense and other shootings of the week. Read them and see what went wrong, what went right and what we can learn from self-defense with a gun.

USA –-(Ammoland.com)- A recent and apparently ongoing series of “incidents’ have been occurring near Elkhorn and Fort Apache here in Las Vegas. It involves as many as 60 middle school students from a nearby school.

The mob of children are apparently stealing things, grabbing purses from pedestrians and passing vehicles as well as breaking windows with thrown rocks.

Local FOX 5 news (KVVU) (and several private citizen ) have published cell phone videos one of these attacks from May 2018. FOX 5 interviewed the victims and attempted to get an explanation from School Police and LVMPD as why nothing is being done.

Find the story on www.fox5vegas.com. Once there, search for: “Teens caught on cell phone video jumping valley mother.”

Residents are left with few choices as to what to do here. So far these are mostly property crimes with the attackers scattering upon intervention by adult males.

The fact that nothing is done, naturally emboldens the youngsters. Sooner or later a victim will be seriously hurt or perhaps actually be killed. Then what?

Where an attack appears to be life threatening, is the answer to shoot a 12 year old?

In a Las Vegas case recently, a smoke shop clerk shot and killed a 13-year-old invader who turned out to be unarmed. The clerk rationally perceived the masked entry by two of three young teens as a lethal threat. He barely escaped a life sentence on an open murder charge.

I discussed this case on the 5/24/18 episode of “Fired Up with Bob Irwin” with an experienced street savvy police officer who offered some advice:

First, residents should document every incident with sound cameras, preferably solidly mounted on their homes to cover the street. Consider the doorbell types available several places.

Documentation is crucial to any prosecution of offenders and for showing a jury the whole story.

Secondly, until this pattern ends, try to avoid direct confrontations. Call 911 immediately if a group appears. Have a non-lethal response, pepper spray or a Taser, for use ONLY in case of a physical attack on you or your family.

With these tools available the young marauders can be successfully prosecuted through the juvenile system which can incarcerate them until age 18, at least here in Nevada.

For serious, repeat patterns of violence, these “children” can find themselves charged as adults.

Here and there in the United States we have experienced these “wilding” types of attacks in past summers. The instigators almost always end up doing adult prison time.

Unfortunately few 12 year olds are able to think that far ahead.

With a heavy dose of police patrols as well as an intervention from a Christian Biker group and school letting out for the summer, the incidents will be stopped.

Hopefully they will not restart in the fall.

Bob is retired after 30 years of ownership of The Gun Store & Indoor Range in Las Vegas. He continues his 2A issues show “Fired Up with Bob Irwin” on YouTube and on KLEY 1230 AM, The Nevada Talk Network on Saturdays at 9 a.m. This is 8 Nevada stations. Streamed world wide. As a firearm instructor of Concealed Firearm Applicants, Armed Security Officer and Law Enforcement Academies over his career, Bob appears frequently as an expert witness for firearm & use of force cases in Federal, State, and local courts.

These juveniles know what they can get away with. They will play it up to their advantage and we have seen this behavior even in incidents with one or two minors. If the group attacks, then it is a very dangerous legal situation for the civilian defender due to perception. Many people do not realize how deadly such encounters are or even how the juveniles will manipulate the situation. 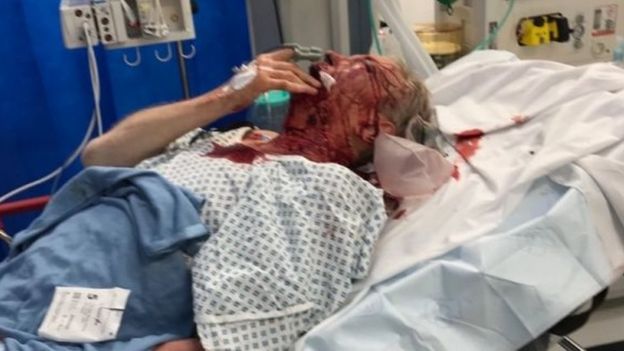 Someone please tell me why law abiding citizens shouldn’t be able (& have the means) to robustly defend themselves against such feral scum.

Specifically, where are these wild baboons partaking in this nonsense?

I’ll be happy to go down there and promptly put an end to their mistaken sense of entitlement.

I can guarantee they’ll not be participating in any such nonsense ever again.I

Hopefully, they’ll not be participating in anything outside of prison/zoo bars ever again.

I consider a Louisville Slugger to be very rational.

Just say something.
Of course the police and school officials will not do anything.
They will just let the violent kids become more violent until a mass shooting happens, like in Florida.
Then they can just blame law abiding gun owners.
So simple, as long as the public remains simple.

“…[T]wo minutes later [the police are] letting them walk again.”

Start tazing and pepper spraying them.

I reserve certain words for those who deserve them.
These “kids” are nothing but feral scum.

Kimber Pepper Blaster II
get one for each parent. When attacked, DROP ONE OF THEM RIGHT THERE. One blast
and a second round in reserve should they not get the message.

In a clear case of self defense, which the above described circumstances sound/read like, a trial jury should deliver a directed verdict of acquittal regarding criminal charges. As for the civil actions that seem inevitable, the “child’s” parents should be required to explain their obvious failings.

This is where you do not want to kill a teen physically attacking you can get one of those very high voltage stun guns, I seen a guy at a gun show accidentally stun himself on the hand and it dropped him to the floor.

Need to take those pavement queen vehicles and start running these criminals over. Don’t try and avoid conflict. Face it head on with the grille of your vehicle

I for one will not withold any knuckled involvement. If your child wants to hit my truck with rocks I’ll plant a foot where it belongs. My wife is a different matter, your child will be boxed up and ready to be shipped to the land fill.

Arm up people. It doesn’t matter if a 12yr old or a 30yr old is assaulting you, you still have a right to defend yourself! So your choice is either defend yourself or be the victim.

I have no problen crippling, or killing little animals attacking me, be they on two legs, or four.

This is why I love Florida’s “stand your ground law”………

It would appear that the LVMPD couldn’t care less about these crimes. Could it be that the kids involved are in the country illegally? Maybe the LVMPD dosen’t want the illegal alien population of Las Vegas to be made public. Otherwise, why wouldn’t the LVMPD jump on this like flies on dog poop?

I wonder what effect it would have if someone grabbed one of those little darlins and pulled their pants down and gave them a real old fashioned spanking? Then promised to do the same to the next one who got out of line.
Of course, the one who does the spanking will have to face charges…….

Public punishment. Like on the courthouse steps. Pillories, stocks, whippings.

Some nations like the PI, Indonesia, and Panama have had no problem with their police shooting to kill anyone of any age committing crimes less than in this video.

If we can’t turn our country around and get downright hard on these thugs, the problem will never get fixed. That’s what liberals don’t understand. You can’t fix bad behavior by rewarding or ignoring it.

Give them to some catholic priests. They like to pull down little boys pants. Perverts.

The trouble is no one wants to do what needs to be done. Some day one of these youths will assault someone who rightfully determines the assault to be potentially deadly because of the victim’s physical afflictions. When they do what needs to be done this crap will come to a screeching halt. Don’t assault an old man with health issues, he might just pull a gun on you. If your lucky, because he understands the law, he won’t drop the hammer on you when you stop the assault. I am glad I didn’t have to shoot either one of… Read more »

This is an insurgency and sporadic ethnic cleansing of mostly white people. You think that is an exaggeration, but more and more blacks and other minority people are seeing it as their right and duty to attack anyone who challenges their implied authority to do whatever they want. The police are not feared so much as they are immediately challenged or attacked, on location or in the media. The video looks like it is a gated community, so the feral children simply attack you when you exit or enter. The police are afraid to get involved, leaving the situation to… Read more »

OFFICIALS need to grow a set of BALLS and end the bullshit. Lock them up and hold the parents (mother AND father if around) accountable. This “can’t touch or correct them cause they are black” shit has to end. Nothing will be done until someone snaps and takes a few out, THEN the “law” will go after the one who has finally dealt with what the “law” wouldn’t.

It Won’t Stop Till One of these ( FINE ) Children
Get Shot and Killed ! Then Their Parents Will,
Be On Evert TV Saying ( They was a good Kid )
(never did nothin to be kilt over ) ! The Cops Need
To Get ALL The Videos of These Kids and Lock ,
Them Up ! ( after court hearings convict them )
JUST a MATTER of TIME , Before One Gets SHOT !
WHO’S TO BLAME THEN ? (The Good Childen Is )

No one likes to harm a child, but these little demons need the sh*t slapped out of them several times. If not now, they will be their own victim of adulthood criminals being killed during a crime.

No, Not “Demons” these are terrorist’s And need to be treated as such! Along with their parents!

I love it !! Feral asphalt apes !! Best description I’ve heard in years…oh my..dead on accurate !!! No time for checking ID for age..treat em like the scrum they are. Leave 4 or 5 dead and I bet it doesn’t happen tomorrow. Past time for Whites to open eyes. Its all about skin color to the attackers…

When I was working juvie, we had a lovely little darling that had committed 4 yas 4 separate forcible sexual assaults on different people. He was eleven. Just because they are 12, causing a crime considered mob action and mayhem. Mayhem is a very severe legal term. .maybe time for these fucks to go visit jail, arpio style. During roman law style rulings, civilians have a duty to protect others and report crimes, as well as go to jail in the stead of their juvenile children. Evidently these parents are knowledgable of these crimes… Perhaps, the issue is now up… Read more »

These are hate crimes! Please note the color of their skin and those of their victims. Stop it now or stop it for good later!

@Steve…That’s exactly what I noticed right off the bat. It seems they might have a teacher who preaches “kill whitey”. This is the same crap that’s going on in South Africa, with the white farmers being murdered by the commie brand of blacks they have there, thanks to that subway bomber who everyone felt sorry for when he had to go to jail.