Idaho – -(AmmoLand.com)- I’m always on the lookout for a comfortable to carry EDC folder/lock blade. I don’t carry little pen knives. I like 3 ½” blade folders.

I don’t want to be out hunting and forget to throw in my hunting knives and be stuck cleaning and skinning my big game with a little pen knife: Uggh, one year that happened to me. I shot a bear and of all people, I had forgotten my knife. All that I had to bone it out was some rinky-dink knife. Never again. So when I stumbled upon the Bear Edge Spring Assisted Knife 61112, it caught my eye.

After using it, I fell in love with it. I liked a lot of its attributes. Let’s go over them.

I don’t like a bulky knife. I want it big enough to do the job but thin enough, so I forget I’m carrying it until I need it. The knife is only 7/16” thick. I like the idea of an assisted opener, but due to the positioning of the thumb stud on a significant majority of the AO knives on the market, they just don’t function very well. Not so with the Bear Edge Spring Assisted Knife 61112. It works smoothly, in fact, as good as any that I’ve tested. If you favor a flipper knob, it also has one of them. But it is a little sluggish as compared to when you use the thumb stud.

There is also a finger groove on bottom for your pointer finger and the rear end of the knife flares out to hold your little finger in place. The Micarta handle is slightly roughed up which should further enhance the stability of holding this knife.

The Bear Edge Spring Assisted Knife 61112 utilizes a liner lock. I’ve never decided whether I favor a liner lock or a locking system on the back. I think I may slightly prefer a liner lock.

Another thing I’ve never decided if I like or not is pocket clips. I know that they are wildly popular, but it always seems to block access to my front pocket when I clip my knife there. But regardless of my personal preferences pocket clips are popular, and this knife has a reversible pocket clip for those of you that demand one.

I don’t put lanyards on my knives, but if you do, it is lanyard compatible.

So as we wrap up, I like this knife and am carrying it as we speak….type. Check it out. I think you’ll like it too. Plus the MSRP is only $48.75. And as usual, we’ll close with the specs. 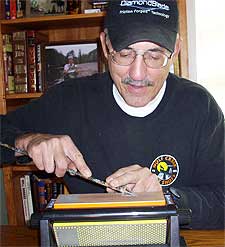 Disclosure: Some of the links below are affiliate links, meaning at no additional cost to you, Ammoland will earn a commission if you click through and make a purchase.
Recent Comments
Editor’s Pick
AmmolandTV
View All
We use cookies on our website to give you the most relevant experience by remembering your preferences and repeat visits. By clicking “Accept All”, you consent to the use of ALL the cookies. However, you may visit "Cookie Settings" to provide a controlled consent.
Cookie SettingsAccept All
Read More
Manage consent