U.S.A. –-(Ammoland.com)- There’s no denying the impact video gaming has had on society. Since the early days of Atari, kids would spend hours playing Space Invaders, Asteroids and Pac-Man. Fast-forward 30 years.

Today’s gaming industry is quite simply astounding. Of course, the X-box and Playstation platforms rule the roost with Fortnite, God of War, Red Dead Redemption making millions of kids late with their schoolwork.

One common thread in the firearms industry that everyone agrees upon: “We need to grow the shooting sports … take your kids to the range … grassroots this, grassroots that…”

3-Gun Nation (3GN) has done a fair amount over the past 10 years to answer that call. Whether through television, tournaments, a national club series, social media, videos, training classes, the list goes on and on. However, even with all of those efforts we’ve only reached a fraction of the modern youth in today’s society.

Well now we can add one more weapon in our outreach arsenal, 3-Gun Nation VR.

3-Gun Nation VR was developed as a collaboration between 3GN and Team Bravo, a gaming studio based in Hong Kong. The studio had developed a practical shooting-based game known as “Drills VR.”

“The guys at Team B were introduced to us by Kevin Chau, our Regional Director for Asia,” said Pete Brown, 3-Gun Nation President. “They wanted to create a 3-Gun game with us that mimics the real thing, right down to our club series classification system, classifier stages, natural terrain ‘outlaw’ stages and even the man-on-man shoot-offs.”

The core strategy of 3GN VR is to develop a gaming platform that represents real 3-Gun competition shooting. The system includes embedded videos and resources to teach users the baseline of what real 3-Gun competition is like. “Nothing can replace real firearm training and safety, however if we can push a fraction the game users to get real training, the technology can only help us grow and create new shooters,” said Brown.

Unless you live under a rock, VR gaming has exploded over the past few years and shows absolutely zero signs of slowing. Steam, the platform for PC gaming, boasts over 18 million users daily. You read that right … daily. According to Statista, a national analytics site, the latest figures from January 2018 show that Steam had 18.5 million simultaneous users at peak time.

While VR gaming is currently more expensive endeavor than console gaming, it will only streamline and become more accessible as time goes by. Beyond that, it’s more than just video games. Businesses worldwide are using it as a tool for training, conferencing, AI and robotics.

The first release of 3-Gun Nation VR is expected to hit the Steam platform by-or-before March 1, 2019. With online VR gaming, updates and improvements can be made frequently. This means that 3-Gun Nation VR can grow, update and improve on a daily, weekly or monthly basis. Additionally, it’s an opportunity for sponsors in the firearm industry to get exposure to this global audience.

Nothing can replace the days of Pac-Man in your living room. However to be able to learn, compete and enjoy 3-Gun competition in a virtual setting is pretty cool too. 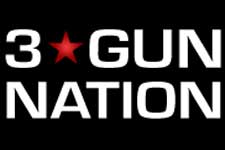 The National 3-Gun Association is an organization dedicated to the promotion of 3-Gun competition. “3-Gun Nation” is the title of our tournament series, website and television show airing on the Sportsman Channel and the Pursuit Channel.