USA – -(AmmoLand.com)- On April 26, 2019, President Trump announced he will revoke the United States’ signature to the Arms Trade Treaty (ATT), and requested the Senate halt the ratification process. As can be expected, the announcement elicited immediate cheers and jeers, but there is a critical question that has yet to be addressed. What does a U.S. withdrawal from the ATT mean for U.S. exporters and importers of firearms, ammunition, and other defense articles?

As many of you are aware, the object and purpose of the ATT is to establish common international standards for regulating the import, export, transfer, and brokering of conventional arms, and to prevent and eradicate the illicit trade in the same. Article 2 of the ATT defines “conventional arms” to include the following:

Notably, the ATT covers ammunition as well as conventional firearms, requiring States to establish and maintain a national control system to regulate the export of ammunition. Other noteworthy provisions of the ATT include transfer restrictions, export information sharing, end-use certifications for imports, brokering controls and international cooperation. A full copy of the ATT is accessible here.

The F.A.I.R. Trade Group has long opposed the U.N.’s efforts to control small arms and light weapons and impede legitimate trade, and in particular we have repeatedly vocalized our concerns over the ATT’s broad scope and potential negative impact on the lawful and legitimate international commerce in firearms and ammunition. On July 11, 2012, Executive Director Johanna Reeves addressed the United Nations in opposition of the ATT. Speaking before the Conference, Ms. Reeves cautioned, “the ATT will perpetuate the uneven playing field in international trade because every state, under the guise of sovereignty, will enact exactly what it wants to accomplish its own trade goals. The ATT, then, will become yet one more tool for certain governments to increase their market share to the detriment of those democracies that accept and abide by the treaty.”

The following year at The Heritage Foundation’s session, “Assessing the Risks of the U.N. Arms Trade Treaty,” Ms. Reeves explained F.A.I.R.’s concerns: “even if the U.S. takes no action with regards to the ATT, even if it does not become a signatory, U.S. exporters and importers will be faced with tighter rules coming from other countries that will affect them commercially.”

On this point our view has not changed, and we again warn that even though the United States may no longer be legally bound to the ATT, many of our closest allies and trading partners are.

For example, the United Kingdom, Australia, France, Germany, Italy, and Spain all have ratified the ATT. In fact, 101 countries have ratified the treaty to date, which means these countries have committed to implementing the treaty provisions, including those related to transfer and end-use restrictions. An additional 45 countries have signed but not yet ratified the treaty, including Bahrain, Colombia, Indonesia, Philippines, Thailand, and United Arab Emirates, to name just a few. So even though the President now has promised to withdraw the United States from the treaty, the provisions will find a way into our international commerce. U.S. companies will likely find themselves, if not already, having to deal with increased end-use justifications and other bureaucratic hurdles that governments of ratifying countries implement to comply with the ATT.

There may also be unintended consequences, such as ATT ratifying countries restricting or prohibiting firearm exports to the United States because we are no longer adhering to the perceived global norm established under the treaty. The point is that just because the United States withdraws from the treaty does not mean businesses can forget about it.

If the Administration wants to make a significant difference and truly improve international trade for the firearms and ammunition industries, it should finalize and implement the rules to transition commercially available firearms and ammunition away from the export controls of the Department of State and over to the controls of the Department of Commerce.

Please direct comments or questions regarding this alert to F.A.I.R. Trade Group at [email protected] 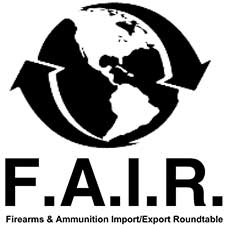 The F.A.I.R. Trade Group is a 501(c) (6) organization dedicated since 1994 to protecting the interests of the firearms and ammunition import and export community. F.A.I.R. operates entirely on the funds derived from our dues-paying membership. If you are interested in becoming a member or contributing to the organization, please visit our website at: www.fairtradegroup.org.

Turn the firearm around, Facing the U.N.building, Cut that stupid knot OFF and pull the trigger.

The U.N. building in NYC is supposed to be RENTED by the organization but…………….they never paid a single rent payment. This is the reason that you hear (the true) mantra that the USA has never paid the required UN dues that are charged each member nation.

The reason the UN never acts upon the past dues is that they are afraid WE will call them on the rent (which FAR exceeds the past dues).

Easy fix? Demand all rent due in full or be evicted!

Like I said before, send the UN to France and let them deal with their nonsense, most of the members are under dictatorship or military rule where guns are not allowed to be owned by their citizens, all this ops for is to trample our rights under our Constitution! This is also where the World Order and the World Court is coming from,it is well over time to send the UN packing!

What happened to all the small arms ammo that obummer bought while in office.

LOL – I can’t believe that insane rumor still gets passed around……..

Is there a report, a true article any documentation He Obama didn’t buy up the small arms ammunition supposedly for DHS. I’ve heard the same rumor.

Forgive my ignorance, but how is the United States legally bound to a treaty that had not been ratified by the Senate?

Will Flatt
Reply to  Booter

President Trump should kick the UN right the He77 out of the USA. Period.

I agree with gas block and it cannot be soon enough

You got that $μ¡t right

The first thing that needs to go is the pistol with the barrel tied in a knot. That flys in the face of anyone that owns or believes in guns and, mainly, freedom. We have no use for these do nothing clowns that can break any law they want to and declare immunity. They have no business on our soil.