U.S.A. –-(Ammoland.com)-After the recent shooting in Virginia Beach, Democrat politicians said US gun owners were causing mass murder. Biased journalists said the same thing, and both of them are fantastically wrong. The real mass murderers are the people who claim to be for “gun safety”. The results are shocking once you look at the data and once you uncover a few facts. Unfortunately, our biased media is spewing spin rather than truth.

Do guns save lives?

Honest citizens defend themselves thousands of times every day. That isn’t rhetorical hyperbole, but hard statistics. We defend ourselves about every 30 seconds. Honest and law-abiding gun owners use their firearms for defense about about a hundred times an hour, about 2800 times a day.

These honest citizens used their personal firearm to rescue themselves until the police arrived. You don’t see it in the news because these gun owners are exactly like you and me; they are wonderfully reluctant to press the trigger. Criminals almost always run away from armed victims just as the criminals run away when they meet armed police officers. Like police officers, the people who carry a legally concealed firearm in public are shockingly law abiding.

Armed defense doesn’t happen on every street every night, but it happens millions of times a year here in the US.

Gun-control disarms these honest citizens who obey the law. Gun-control means that a young college student is disarmed as she walks to her apartment late at night. Gun-control means an elderly man can’t defend himself as he walks across the parking lot on a rainy afternoon. These honest citizens are disarmed by the high costs and burdensome regulations that politicians impose on gun owners. They are disarmed by bureaucrats who impose “gun-free” zones. Criminals never choose a fair fight. They gang up on isolated victims. Disarmed citizens are easy prey. 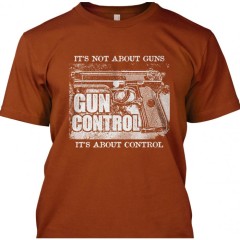 I’ll simplify the problem if you still have doubts. About ten million honest citizens didn’t get their concealed carry permits because of high fees and burdensome training requirements. Many more were disarmed by arcane gun laws. At the same time, criminals committed almost 300 thousand aggravated assaults and murders last year.

We have 23 thousand gun-control regulations today. Those laws are disarming the good guys who obey the law and they don’t disarm the bad guys who ignore the law. The good guys are your armed neighbors. They are hundreds of times more likely to save a life with their firearm than to have an accident with one. Criminal assault happens every day. That means every “gun-control” law is more likely to make the good guys vulnerable than it is to disarm the bad guys.

Listen to the people who want to prohibit legal gun ownership. Judge them by what they do rather than what they say. Gun-control produced thousands of additional victims every year, though the apologists deny it. The victims are our neighbors. Tens of thousands of them are needlessly assaulted every year.

These are the people who are promoting violence across America.

Disarming an honest citizen puts all of us at risk. Armed America saves lives, while gun-control advocates cost them. Listen to the news if you think violent crime doesn’t exist. Listen to Self Defense Gun Stories if you think self-defense doesn’t happen every day.

We need more good guys. Be one of them.

“Any Study of Gun Violence Should Include how Guns Save Lives”

“DRAMATIC REVELATION: The day of the Virginia Beach shooting one of the victims considered taking a gun to work over concerns about a colleague, but didn’t because of gun-free zone”

The original article is here. Rob Morse writes about gun rights at Ammoland, at Clash Daily, and on his SlowFacts blog. He hosts the Self Defense Gun Stories Podcast and co-hosts the Polite Society Podcast. Rob is an NRA pistol instructor and combat handgun competitor.

Yea,
Well tell us something we don’t already know.

This is not the forum where this needs to be seen.

When you get this article printed in the New York Times, then We’ll be impressed.

Gun control has never worked it never will. What these Libitards keep doing is not to control guns. It to try to control The People. Us. All they want is more power. How they get it and who dies doesnt really matter to a Libitard. Just the control does.

So-called “gun control” isn’t about stopping crime. Never has been.

Whenever I share pro-2A articles, even if I offer no other comment, I always add the saying, “Anti-gun is Pro-tyranny, Pro-crime, and Anti-civil rights”. The Anti-civil rights part seems to be the most triggering part because the ones supporting gun control also like to proclaim their support of civil rights. I guess their hypocrisy being thrown in their face isn’t pleasant.

This other site is far more pro 2A than tyrantland but it doesn’t roll as fast and you can’t larp post there.

All good scoop from Virginia Citizens Defense League. For those of you who do not know, the Citizens Defense Leagues are the No Compromise state level self defense rights advocates. No other groups focus on state and local law and policy. Here in Arizona, our Arizona Citizens Defense League just beat back 14 anti rights bills and passed two. We are the number one target of Mikey Bloomberg and the giffords clones and still we prevail in a nearly split legislature. Until American come to their senses about self defense it will remain the task of the few, the proud… Read more »

I’m in AZ as well, how do I help support the ACDL?

The clowns in America are behind all the gun control. There is a group of folks, PATRIOTS, out there right now who has been laying it all out since October 2017, theyve not been wrong yet.
You folks are getting your news from the wrong sources, it’s the clowns

Truth. Clowns In America, CIAISIS. Those pesky patriots have done a great job revealing the fake gun control agenda and the clowns are running across every channel trying to quell the truth about their fake gun control including on Ammoland. Infiltration is their game. Now we know what they do in those office buildings and they do the same from home. They tweet lies. They’ll even try to get you to go to other sites for some good ol MKULTRA games. Open source information is their worst nightmare. Clowns create the “sources” for fake news stories then report upon those… Read more »

We all know that gun free zones promote mass killings. Whatever their (evil) intentions are, when politicians disarm the public (for their own good–supposedly) they are just as culpable and just as guilty of murder as the killers are. They empower the evil doer. They disallow the innocent their GOD given mandate and constitutionally protected right to keep and bare arms. What exactly are they really trying to do? To a politician, passing laws is just job justification. There are laws out there that are unconstitutional, thus the makers and enforcers of those laws are committing treason. Are politicians better… Read more »

Deplorable Bill, I am so glad you were armed and there when your family needed protection. Great work.

Unless there are armed guards and metal detectors at the entrance, I ignore the “Gun-Free Death-Zone” designation everywhere it is posted, and those where it is implied.

Yes, that includes the rare times that I must go to the local public school. The children and staff are never safer at school than when I am there armed. There is never an armed guard or school resource officer.

According to this article where a Muslim took a gun into a school it is a felony though if you got busted and I was on your jury I would not convict so remember don’t take the deal and THANK YOU for failing to comply and please note in this article the Muslim did not comply to the NRA gun control psyop to disarm Americans and sell permits for profit. NRA instructors pushing gun permits is equivalent to when I take my truck in to get the tires rotated and they hand me a long list of items they say… Read more »

Two words everyone needs to learn and remember: “JURY NULLIFICATION”

I see you are trying to make an attempt but yet I must clarify that concealed carry permits are unlawful requirement because 2A does not state permits are required thus making all gun control contrary to 2A that does not support 2A unconstitutional so to say, “Like police officers, the people who carry a legally concealed firearm in public are shockingly law abiding.” is a load of crap because it promotes the very gun control that I do not support due to it’s infringing factors and I don’t lease rights only privileges I lease. You are attempting to reduce my… Read more »