USA – –AmmoLand.com)- Last year, I traveled across the globe to the beautiful country of Slovenia to test out the Rex Delta Pistol, by Arex. Well, almost a year later, these pistols have hit the states, and if you’re looking for a user-friendly, polymer-framed striker-fired 9mm handgun, these might fit the bill.

The Rex Delta is not a clone of an existing firearm but is an entirely new pistol design from the ground up. Similarities to the Glock 19 or SIG 320 will be drawn, of course, but that has more to do with the polymer frame, and striker-fired system, than anything else.

The pistol ships with two magazines, several back straps, the mandatory firearm cable lock, and an actual printed instruction manual.

My initial concerns about a lack of holsters for carry seems to be abated as the Rex Delta fits well in most of my Glock 19 holsters. There are specific holsters emerging on the market as I type this, but if your favorite brand makes a G19 holster, the fit may work about 90% of the time.

Now should you attach a light or laser to the rail, you will have to find a G19 holster in that configuration or go the custom route.

I had confidence in the Arex Rex Delta Pistol as I had shot several of them alongside 12 other shooters in Slovenia previously. I wanted to see if anything would make it fail as far as commercial FMJ and JHP of various weights and profiles here in the States almost a year later.

To date, I have not found anything to cause it to malfunction in any way.

Previous trips to the range with assorted flavors of 9mm ammunition taught me that Wilson Combat 124 grain XTP jacketed hollow points were the best in a defensive load with regard to accuracy and at 50′ I kept them under 3″ this time. My personal best five-shot group with this ammunition was 2.74″.

That can get pricey for practice, so I switched out to Aguila 9mm 115 grain FMJ and came in at just over 3″ at the same distance. The pistol functions fine by my specs and is reasonably accurate. This is not a match grade pistol by any means, but it does not pretend to be. The Rex Delta is a compact service grade pistol intended for self-defense.

I absolutely love the way this pistol breaks down! You pull down ion the tabs as if you were field stripping a Glock, but instead of squeezing the trigger, you pull back and to the side, and you’re done.

I pretty much could not stand the triggers on the test guns in Slovenia, and I let it be known. One of my cohorts in the country actually developed a blood blister from shooting it so much!

The current trigger was much better than the one I test-fired initially, but it still has room for improvement. It has a short reset, but the initial creep is rough and breaks slightly more than 5 lbs. Maybe another 1000 or so rounds will smooth it out, or Apex will come to the rescue. However, the new factory triggers are a lot smoother than the initial ones. My current round count on this handgun is just over 2000 rounds, so I am hopeful.

Lastly, the firearm is completely ambidextrous. One of my rituals at the range, when I am finished with my goals for the day, is to shoot whichever handgun I am using one-handed and left-handed for a box of ammunition or two. The Rex Delta allows you to release the slide and drop the magazine from either hand without having to switch controls from one side to the other.

One of my initial complaints about the Delta was the sights. I found them a bit narrow, and a white dot front and the black rear combo is not my favorite. Usually,  this does not bother me as I shoot a variety of handguns, and very few give me grief. I still cannot quite put my finger on why these ones annoy me.

Initially, I was told that Springfield XD sights would fit the slots, but the dovetails may be a bit too big for that. I may try some SIG P229 sights next.

I did have some concerns about parts and support, but was recently assured that there is a steady supply of parts in the country should you need to service your pistol. 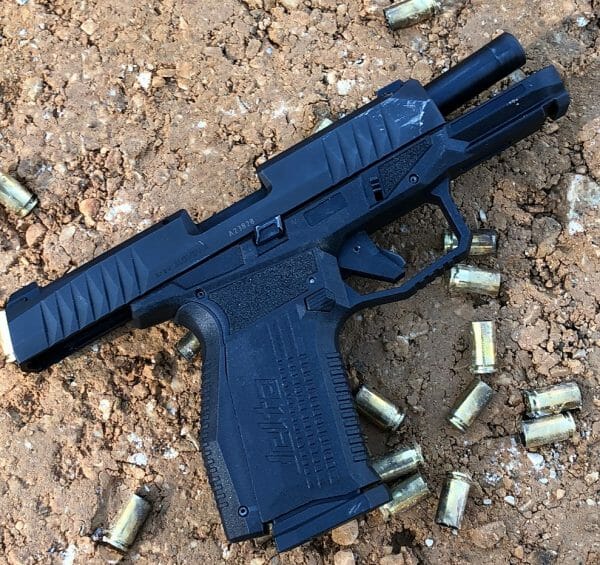 All in all, the Arex Rex Delta Pistol is a workhorse of a 9mm. The pricing is competitive and on the lower end of the spectrum, which is surprising considering all the features packed into this pistol. Most shooters will be highly content with what they get. A few others like myself will still hold out for improved aftermarket triggers and of course, sights.

Mike Searson’s career as a shooter began as a Marine Rifleman at age 17. He has worked in the firearms industry his entire adult life as a Gunsmith, Ballistician, Consultant, Salesman, Author, and was first certified to teach firearms safety in 1989.

Reliability-wise Arex knows what they’re doing. The Arex factory is state-of-the-art. I’m seeing the Rex Delta at $425.00 with Free Shipping.
I’m in.

Great report with lots of facts and details! Well done!

Mathew, you can find night sights for Arex Delta pistol at Suarez International, but they are still very simple. I just love my pistol, excellent quality, precise, ergonomic, affordable and beautiful design.

Please let us know of any updates about alternative sights you discover (specifically night sights)!