U.S.A. -(AmmoLand.com)- Clint Smith once said, “The only purpose for a pistol is to fight your way back to the rifle you should have never laid down.” Where I live, only handguns may be legally carried. Elsewhere, even a light rifle gets in the way of daily activities. I have to make do with a handgun, even though I’d wish for a rifle should a weapon ever be needed for self-defense. Grand Power X-Calibur, for my taste, is the pistol that comes closest to filling the niche of a carbine while fitting a belt holster.

The main feature of a pistol isn’t the raw power but the ability to land accurate hits. X-Calibur started as a competition pistol, and its 5-inch heavy fluted barrel combined with a crisp trigger make it a viable 60-yard weapon off-hand, 100-yard supported. Five inches of barrel also give a respectable sight radius. The original sight arrangement was fiberoptic front and textured black rear, with a rather sharp rear sight blade. That worked well in daylight, but self-illuminated sights were needed for shooting at dusk: Hi-Viz H3 combination fiber optic and tritium front, KFS Industries Kensight click-adjustable tritium rear (which was also properly-rounded for comfortable carry). This combination works well in daylight or at dusk, both with shooting and close-up computer glasses. The ability to focus on the front sight with vision that’s undercorrected for distance is the main reason why I avoided going with a red dot focused at 50 yards.
Having carried a wide variety of handguns in the past, I find the M1911 style manual safety natural for me. X-Calibur comes with several ambi safety levers which can be user-resized to comfortable dimensions. I can run the gun with left or right hand without undue contortions. The extended slide stop lever is also ambidextrous. The mag release button isn’t ambidextrous but switchable for left-hand use if needed. The grip is supplied with backstrap inserts to adjust the natural point of aim, making X-Calibur easy to point shoot well.
The main feature setting it apart from all others is Jaroslav Kurachina’s unique and superior rotary breech design. Rotating barrel lockup has been around for over 110 years but gained small popularity as pistols were generally bulky, prone to jamming when even moderately dirty. Over time, rotary actions abraded the barrel tabs through drag friction and lost accuracy. Grand Power K100 army pistol and its refined descendant X-Calibur use a precision-milled raceway on the outside of the barrel to interact with a roller pin embedded in the frame. The plastic grip frame conceals a solid steel frame within. Partway through the short recoil, the rearward travel of the barrel stops, the spent case extracts and ejects. The full firing cycle time is about 1.25ms, substantially slower than the 0.8-0.9ms typical of Glocks and other tilt-barrel systems. That longer linear barrel travel, very low barrel axis, and non-impact lockup produce minimal felt recoil and low muzzle flip.
The long slide X-Calibur felt recoil is closer to 22WMR than to other centerfire pistols. Plus P defensive loads kick less than plinking ball ammo in a conventional semiauto pistol of the same size and weight. The mild recoil means a faster return on target and longer training sessions before fatigue sets in. Longer than usual delay before unlocking reduces the ejection port pop, also keeping the locking surfaces and the chamber cleaner than usual. The heavyweight and the fluting keep the barrel cool on extended strings of rapid-fire: if necessary, this gun can be used to suppress an opponent’s position as long as the ammunition supply holds out.
The barrel length is a personal preference. An extra inch of slide relative to regular service pistols doesn’t affect concealment much, but it does reduce muzzle flash and improves velocity just enough to guarantee expansion. While the 16+1 metal magazines reliably feed any ammunition, I prefer Seismic 185gr hollow points. Being subsonic they produce less flash and less noise than typical lightweight +P loads. Testing in ballistic gel showed 17-18 inch penetration with about one-inch expansion. Testing on hogs produced correspondingly high performance through bone and gristle. This isn’t rifle-level performance but on par with a PCC.
The rotary breech Grand Power pistols are still relatively uncommon in the US, which limits the availability of holsters and accessories. Falco, another Slovakian company, makes excellent leather and Kydex holsters and mag carriers to fit X-Calibur and other GP pistols with or without lights or lasers installed on the dust cover Picatinny rail.  Several domestic makers offer options as well. The importer, Global Ordnance, sells extra magazines and accessories at very reasonable prices. The GP lineup may not be mainstream yet, but it’s well enough supported to make it a viable option for heavy use. Shorter 9mm, and long-slide 45ACP and 10mm variants are available.

A 9mm striker-fired Q100 with an exceptionally good trigger is also an option, but my choice of X-Calibur came from shooting it at IDPA competitions. Compared to the guns used by others, it felt like an unfair advantage and gave me scores out of proportion to the skill level. I am not naturally a fast shooter, but running all stages with zero misses has a charm of its own. In the case of a real firefight, good accuracy reduces downrange liability. Having carried M1911 and G17 in the sidearm role, I find that X-Calibur combines the advantages of both with the uniquely superior action of its own.

Oleg Volk is a creative director working mainly in firearms advertising. A great fan of America and the right to bear arms, he uses his photography to support the right of every individual to self-determination and independence. To that end, he is also a big fan of firearms. Check out his world-renowned photography and his YouTube channel. 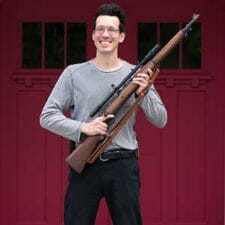 All of my pistols except for my Taurus Millennium Pro 45 and 40 are accurate out to that range with a 3.25 barrel so who needs the extra length to carry if you are talking about concealed and that is about all I care about other than bears and cats in the mountains. Then maybe I might be interested in this in 10mm for that purpose.

Last edited 1 year ago by musicman44mag
3

Do they have a pistol with an overall length of 6” or less? If so, then it will fit in the front pocket of men’s pants. That way there is no need to wear outer garments to “cover” a pistol!

Tis a picture of a beautiful woman. GOOD!