Every prize has been generously donated, so 100% of the proceeds support Knife Rights’ legislative initiatives.

Additional prizes are still being pledged and received and will be posted as soon as confirmed.

Knife Rights is the One Getting it Done, Forging a Sharper Future and Rewriting Knife Law in America WITH YOUR SUPPORT!

See it all and DONATE at: www.UltimateSteel.org 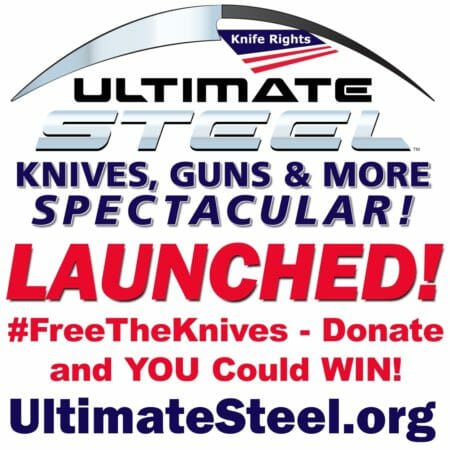 Both drawings are WINNER’S CHOICE. Winners in EACH Drawing will get to choose their prize from all remaining prizes, in the order in which they are drawn. Not only are you helping support Knife Rights, but you could win the exact prize that you want.

Knife Rights’ record of 37 bills enacted repealing knife bans in 25 states and over 150 cities and towns since 2010 is unrivaled. With your support, Knife Rights will continue rewriting knife law in America™. DONATE TODAY for a Sharper Future™ for all Americans.

Knife Rights Chairman Doug Ritter said, “this is one of the very best fundraisers anywhere!  Winner’s Choice means you don’t just get a chance to win, you get win a prize you want. Plus, look at the free donation bonus knives you could get in addition to extra chances to WIN. Donations support Knife Rights’ work Rewriting Knife Law in America™, so it’s a WIN-WIN for everyone when you donate!”

Knife Rights (www.KnifeRights.org) is America’s grassroots knife owners’ organization; Rewriting Knife Law in America™ and forging a Sharper Future for all Americans™. Knife Rights efforts have resulted in 33 bills enacted repealing knife bans in 23 states and over 150 cities and towns since 2010, as well as numerous litigation victories.

0 0 votes
Article Rating
Subscribe
Login
Please login to comment
0 Comments
Inline Feedbacks
View all comments
AmmolandTV
View All
Editor’s Pick
Recent Comments
wpDiscuz
We use cookies on our website to give you the most relevant experience by remembering your preferences and repeat visits. By clicking “Accept All”, you consent to the use of ALL the cookies. However, you may visit "Cookie Settings" to provide a controlled consent.
Cookie SettingsAccept All
Read More
Manage consent