U.S.A. –-(AmmoLand.com)- This morning, the Vermont State Senate passed an amended version of S. 281 – legislation that includes a provision to make The Green Mountain State the 41st state to allow the use of suppressors while hunting. The suppressor hunting language, which was championed by Representatives Pat Brennan (R-Chittenden-9-2) and George Till (D-Chittenden-3), was added to S. 281 during the floor debate in the House of Representatives and subsequently passed on May 10th. The bill now heads to Governor Phil Scott (R-VT) for his signature. Once enacted, the new law will take effect on July 1st. 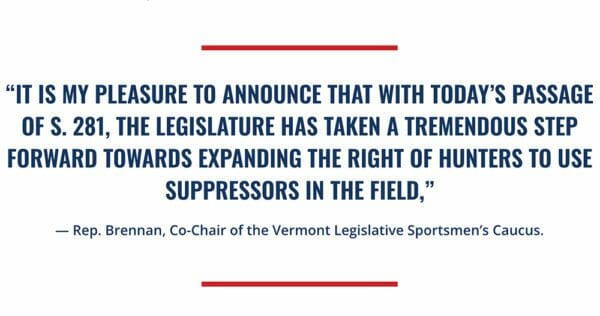 “It is my pleasure to announce that with today’s passage of S. 281, the legislature has taken a tremendous step forward towards expanding the right of hunters to use suppressors in the field,” said Rep. Brennan, Co-Chair of the Vermont Legislative Sportsmen’s Caucus. “For the past seven years, law abiding citizens in Vermont have enjoyed suppressor ownership, but their use has been restricted to sport shooting at ranges only. With the passage of S. 281, Vermont outdoorsmen and women finally have the ability to protect their hearing and the hearing of the youth hunting community as well. This bill was a long time in the works, but it has finally come to fruition thanks to the cooperation of many, most especially the Department of Fish and Wildlife and its Commissioner.”

The American Suppressor Association has been fighting for suppressor rights in Vermont for a decade. Over the years we have helped draft legislation, provided written and verbal testimony, and hosted multiple live-fire suppressor demonstrations for legislators, law enforcement officers, and the Vermont Fish and Wildlife Department. In 2015, legislation introduced by Rep. Brennan legalized the ownership of suppressors in the state, but not their use in the field. Today’s passage of S. 281 brings us one step closer to full suppressor legalization nationwide.

“What Representatives Brennan and Till have accomplished is nothing short of extraordinary,” said Knox Williams, President and Executive Director of the American Suppressor Association. “It highlights the value of hard work, persistence, and bipartisanship. There should be nothing controversial about protecting hearing. We could not have asked for better partners in the fight for your suppressor rights.”

Just remove them from the NFA. Or better yet lets burn down the NFA completely.

Zip about how Vegas STINKS, another ATFBI entrapment-“sting” gone bad.

Think Cox is the answer? See who co-signed. Never grokked why some guys like Cox.

Suppressors are now better than ever and can protect the hearing of all shooters. The federal government and the ATF are collecting money in the pretence of looking to obtain more records on legal firearm owners.
Any device that protects the your hearing and safety protects others should be advocated not politicized for gathering information on the shooting public.

Looking at the bill, there is an automatic repeal of the authority to hunt with supressors (undoing this change) on July 1, 2024. I’m excited for VT to be finally catching up with the rest of the country on this law, but worried that anyone would think it appropriate to treat a straightforward bill like this as a “trial period”. Am I wrong in my reading of that?

As a Vermonter, a suppressor owner and someone who typically follows our legislative sessions fairly closely in regards to firearms/hunting bills, the fact that this passed at all is a shock.. they really wanted that coyote bill to get thru I guess. While I completely agree with you, I’m pretty sure the only way they got it past Fish & Wildlife, who see poachers behind every tree, was to have a trial period…. so they can see for themselves that suppressors have zero effect on poaching numbers, just like every other state.