U.S.A. -(AmmoLand.com)- Senator Joe Morrissey (D-16) announced that the first piece of legislation he will file for next year’s session will be an “assault weapons” ban bill, to ban many commonly-owned rifles, shotguns, and handguns that law-abiding citizens use for self-defense and sport.

Back in 2020, anti-gun extremists already tried and failed to pass such a comprehensive ban when they held majorities in both chambers of the General Assembly. It was considered too extreme by some in that majority, and it was ultimately defeated by a bipartisan vote in the Senate Judiciary Committee.

Sign up for the Daily Digest email and protect the 2nd Amendment.

Please stay tuned to www.ammoland.com and your email inbox for further updates.

Does that comprehensive gun ban apply to criminals or exclusively only to the law abiding ?

Just the law abiding. Meanwhile criminals will get real automatic weapons from all the illegals Biden is letting through. It will probably come from Afghanistan.

Or be a left over from fast and furious.

That is hilarious. Sad and pathetic that it’s true but also hilarious. Just one more law will fix it, right? Well said Michael J.

Obviously, criminals just need the right laws in place to stop using guns in crimes. The law abiding just need to understand, it isn’t personal. Think of it as trickle down law enforcement.

So criminals will break the law while democrats continue to dismantle the US Constitution. Stupid people elected by the people

I’m thinking that dismantling our Constitution is the product of intent and planning. I could be wrong.

You have no idea, https://sayno2joe.com

Won’t fly. The Supreme Coart already ruled the AR platform is “common use” and can’t be regulated.

What an absolute nutcase!!! I hope he can’t LEGALLY own firearms…

Not surprising that this clown’s district is just south of Richmond, VA. There are a LOT of liberal loonies in that town & once they make some money they move out “into the country” & turn it into a cesspool. Everything folks have said here about him is true. He has been disbarred. He IS a pedophile….uh….wait….she’s “legal” now. He IS a POS, but the voters voted him back into office. Maybe that has more to do with the republican party of Virginia allowing too many seats in both houses to run unopposed recently, but I digress.

Folks…I think it would be best to draw a picture of the legal career this assclown has had. He’s been disbarred TWICE. He’s punched lawyers in open court…he assaulted construction workers at his house. This website appears to have been created by the father of the woman who is now Morrissey’s wife…he began having sex with her and impregnated her when she was 17. Take a look at this: https://sayno2joe.com Also notice that two of his own radio show producers have obtained Emergency Protective Orders against him…and this serial liar wants to make sure you have no further legal access… Read more »

why are there so many creepy people named joe?

Anger issues galore! I hope he doesn’t have any firearms in his possession…

Let him be the one who comes to TRY and take them.

Politicians in Virginia and elsewhere seem to lose a lot of sleep over firearms that statistically kill fewer people than bare hands or knives. Considering almost all are owned by legal owners who have a history of being law abiding, I have to wonder how more laws will impact the gun crime statistics in a positive way. The state run media sure has a successful way with building the platform for these power craving oligarchs to influence low effort voters. I worry for Virginia. I had hoped to see some of Northam’s oppressive laws repealed but with gun control, you… Read more »

Weird…the comments I had made last night trying to illustrate exactly who this guy is weren’t allowed to be posted….disappointing.

Dave: Welcome to AmmoLand News. Your comments had links so that causes our system to hold them for review. Sorry for the delay.

Here’s one more about Morrissey…this guy was a former prosecutor for the City of Richmond, Virginia…and he beat this man so badly that a jury awarded the guy $1 MILLION:

Here’s Morrissey on video going off on his producers, watch him instantly go ballistic…just weeks ago.

Thanks for the link proving that he is an ass hole. What a jerk. He needs a new show on the sidewalk of NY and a can that says need help looking for dollars. 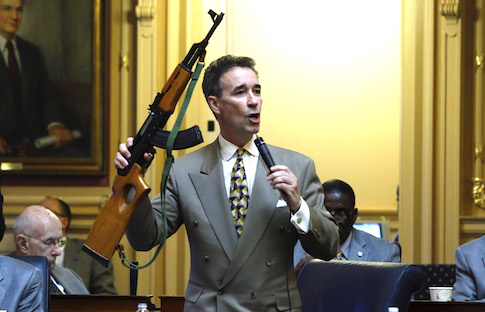