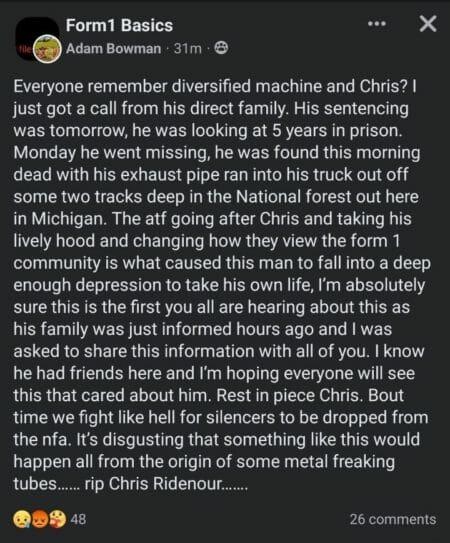 Iowa –-(AmmoLand.com)- The pressure being applied to American citizens by the Bureau of Alcohol, Tobacco, Firearms, and Explosives is enough to pulverize you into dust.

I knew Chris, which is to say I’d done business with him a few times. I have no idea what other burdens he carried or the mistakes he’s made in life. Considering we’re among the living, we all bear burdens – often many.

But, as someone who has dealt, and continues to deal with, the immense pressure ATF places upon an FFL business owner, I have a special level of sorrow for Chris. I don’t seek your pity. However, if you can ponder for a moment how heavy it is to resist the power of government when they come to destroy you, all by means of making LEGAL things instantly ILLEGAL, you’ll have the basis for the problem.

We’re not talking about written laws being broken. Rather, entire businesses that are erected over the years all go *poof* overnight, thus making your business illegal. I often wonder if this isn’t a bastardized form of entrapment…

As ATF continues to create criminals from patriots with reversals of their previous opinions, essentially weaponizing itself against the citizens it claims to serve, death and suffering will naturally occur.

…And Chris, apparently believed there was no way out. I pray he was saved unto Him.

If the goal of this administration was to run ethical and moral people out of business by simply changing the rules of the game, they have achieved their goal.

…And they’ve done so by trampling upon not only the rights and liberties of Americans but now their very lives.  ATF has become a rabid dog.

Michael is a Christian husband and father to two children. He owns and operates Controlled Chaos Arms, a premier custom weapons shop in the Midwest. He serves as Chairman of the board of Directors at the Iowa Firearms Coalition. The pursuit of truth drives him in research and his writing.

Michael enjoys shooting, hunting, and fishing throughout the Midwest and Rockies. An avid outdoorsman and tireless supporter of all Second Amendment virtues, he can be found in his gun shop, in a tree stand with his kids, or on Capitol Hill lobbying in support of Freedom and Liberty at any given time.

We are back to the pre-FOPA days where the ATF is being used to destroy segments of the firearms industry. The ATF and the laws associated with it need to be legislated out of existence.

Another hash mark for the ATF’s murderous rampage over the last 1/2 century!

Love those memes. I often copy them and send to others.

Glad to contribute! I believe in the powerful message they convey, when words alone just won’t do.

I was witness to the ATF’s vindictive approach to enforcing the law a number of years ago. A man angry over a contract dispute totally unrelated to guns decided to “SWAT” a 65 year old man (call him “Al”) by telling the ATF that Al ran a “machine gun manufacturing facility” at his home. The ATF showed up and searched the place and found nothing. Al had no firearms because 45 years ago Al was convicted of a felon (arson of an abandoned building being used as a drug den). There were no tools or equipment that one would use… Read more »

All based on hearsay?

The atfe is a criminal, treasonous to their oath, tyrannical, murderous, threatening, terrorist branch of the government that DAILY disavows it’s oath of office. Each and every person who is or has ever been an atfe agent should be arrested, jailed without bail, tried and, when convicted of crimes including but not limited to, murder, attempted murder, murder by proxy, assault, invasion of property, theft, threats and intimidation etc. should be sentenced under the full weight of the law in accordance with the constitution, federal and state law. Murder, treason and tyranny carry the death penalty. I can tell you… Read more »

The BATF is evil to the core, always and forever. Something needs to be done. Honestly, lots of somethings!!

You’re right! I didn’t see that even though I knew what you said. Since this is a photo of the actual poster, I guess I’ll have to digitally fix this image…
There ya go.

Grant unto him eternal rest O Lord, and may perpetual light shine upon him-Amen.

As for those that hounded the poor man to death, No Mercy.

More will be hired. Tyranny will continue. I suspect they are screened for the ability to take an oath they have no problem breaking on command.

Chuck, I totally agree with Montanas comment too. It reminds me of Waco 1992 when those four ATF scumbags did get their asses handed to them when they were shot and killed going through that upstairs window. No one in that compound fell for the diversionary tactics the ATF tried to use, and those four SOB’s paid, and they paid hard!

I know many good and honorable men who lost their FFL (and thus their livelyhood) but not their life. Who did nothing more than defy batf agents who were violating the law. I was a witness to one of these acts, the FFL dealer reluctantly complied. His license renewal was only delayed for almost a year. My heart sorrows for Chris’s friends and family.

Food for thought. This whole thing is sad but the government didn’t take his life, that was his choice. The government was the instrument that provided the reason he made the unfortunate decision he made. That is what we should take out of this. Maybe his action was a way of saying, hey look, listen, see how bad things are? I know one way I might get the people’s attention and end my misery in the process. Who really knows the degree of depression the suppression from our government caused. Maybe that is part of his message. Right now and… Read more »

Article VI, Clause 3: The Senators and Representatives before mentioned, and the Members of the several State Legislatures, and all executive and judicial Officers, both of the United States and of the several States, shall be bound by Oath or Affirmation, to support this Constitution; but no religious Test shall ever be required as a Qualification to any Office or public Trust under the United States. 2nd amendment A well regulated Militia, being necessary to the security of a free State, the right of the people to keep and bear Arms, shall not be infringed. So they are either stupid,… Read more »

I really wish everyone at the AFT would kill themselves. They’re all wretched vermin who don’t deserve to consume oxygen.

I have never understood why anyone kills himself because of being oppressed (by government, or others) does it without taking some of his oppressors with him!
R. I. P. Chris!

This is just sickening; an obscenity to God, our Constituton, and the rule of law. Even if you are financially able attempt fighting back, all the cards are stacked against you. If you don’t have the scratch to buy time and transparency and maybe intervention through lawyers, all you have is the cartridge box. I had a conversation with a good friend recently who was involved with Oath Keepers for many years, about the real ability to resist the Federal Government and its agents, both peacefully, using harrassment through whatever means available to undermine and impede their efforts; as well… Read more »

You are correct, most would not, but some would. Some believe it justifed to resist an unlawful arrest, with deadly force, if faced with deadly force. There is good movie based on an actual case in Texas, “The Ballad of Grigoro Cortez”. worth seeing. As all gun control laws are Unconstitutional!

THIS I can attest to!

I live in Michigan and this is the first that I have heard of this. Why is it that we have to rely on Ammoland to give us the straight shit? Not one of the local news stations carried or reported this. I’m not as pronounced at writing like many of you are. I just speak my mind and I don’t give a rats ass who I offend. If you’re a Democrat then stay the hell out of my way because I don’t trust any of you. These are my opinions and I don’t threaten any of you. Since I… Read more »

Maybe we need to tell Tucker Carlson about this……………

the ATF was always a rabid dog….it’s just be loosed out of it’s cage now.