U.S.A. –-(AmmoLand.com)- In its effort to prevent law-abiding citizens from exercising their newly restored right to carry without having to give authorities a good reason, the City of New York is now posting as many public areas as possible as “gun-free zones” under the guise of a “sensitive area” designation, most prominently Times Square.

Simultaneously, a new state law now requires carry permit applicants to provide access to their social media accounts as part of the review process. According to WNYW News, the local Fox affiliate, the New York Sheriffs’ Association “has called the rules ‘burdensome’ on local government officials.”

In the Big Apple, the expanded restriction has created a brand new problem for people who may have a “carry business license,” limited carry or special carry licenses for locations now inside these newly-designated “sensitive areas.”

Ammoland has obtained a copy of a letter dated Aug. 31 that was sent to licensees by Hugh Bogle, an inspector with the City of New York License Division stating, “As you should be aware, New York State has recently enacted laws that prohibit those who are licensed to carry firearms from carrying their firearms in certain locations. Specifically, Penal Law Section 265.01-e prohibits the possession of any firearm, even a licensed one, in a “sensitive location.” A violation of this law is a class E Felony. This law goes into effect on Thursday, September 1, 2022. A copy of the applicable law is attached for your careful review. You are being sent this letter because you place of business may now be a sensitive location under this new law and this, continued possession of a firearm at this location is unlawful.”

The letter was dated Aug. 31, which gave recipients one day—or actually less than a day—to comply.

Recipients of the letter are advised to “bring your applicable firearm(s) to your local precinct in order for it to be safeguarded for you. Alternatively, you may bring your firearm(s) to another location where you are lawfully allowed to possess and store it. Lastly, you may contract with a Federally Licensed Firearms dealer (FFL) to store the firearm(s) for you—they may, however, charge for this service.” 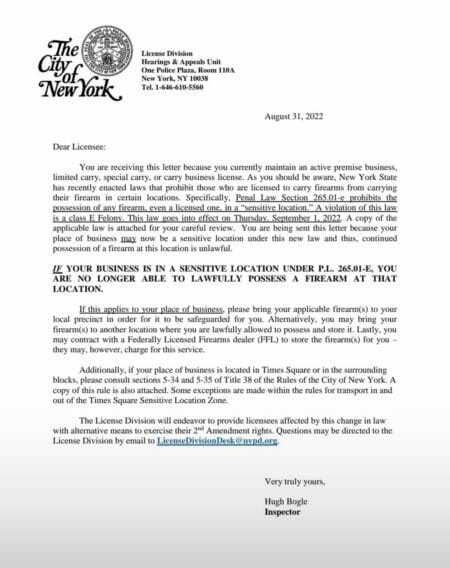 News reports have been showing police placing signs around the famous intersection declaring it a “gun-free zone.” Historically, armed criminals ignore such designations.

Brooklyn attorney Jonathan Corbett, who has applied for a carry permit, perhaps best explained the situation in a quote to the Associated Press.

“They (the new laws) seem to be designed less towards addressing gun violence and more towards simply preventing people from getting guns — even if those people are law-abiding, upstanding citizens, who according to the Supreme Court have the rights to have them,” Corbett said.

As noted by WNYW, Robert Barrows, identified as the executive director of NYPD Legal Operations and Projects, said the new “sensitive areas” rule “essentially expands the number of gun-free areas in New York City.” He said there have already been more than 3,000 “gun arrests” so far this year.

According to the Associated Press report, critics of the new city carry restrictions say the list of prohibited places is “so extensive it will make it difficult for people with permits to move about in public. People carrying a gun could go into private business only with permission, such as a sign posted on the window.”

Published reports said lawmakers changed the permit review process to require access to three years of social media posts in order to prove the applicant is of “good moral character.” The social media provision was added, according to WNYW, “because lawmakers said that previous mass shooters have sometimes dropped hints of violence online before they acted.”

However, this requirement seems as arbitrary as the “good cause” mandate it replaces, and could result in more litigation. That much was confirmed by the Associated Press report, which noted, “The quickly adopted law, however, has led to confusion and court challenges from gun owners who say it improperly limits their constitutional rights.”

As reported by WABC, Democrat Gov. Kathy Hochul and New York City Mayor Eric Adams are portraying these new mandates as addressing “public safety concerns.” This includes providing a list of social media accounts to the authorities at the time of applying for a carry license, and completing a “state-regulated firearms training course.”

While Second Amendment advocates hardly expected anti-gun politicians and bureaucrats to quietly accept the Supreme Court’s ruling, the situation in New York demonstrates the lengths to which they will go to get around that ruling, while affirming they are simply bad losers.

Dave Workman is a senior editor at TheGunMag.com and Liberty Park Press, author of multiple books on the Right to Keep & Bear Arms, and formerly an NRA-certified firearms instructor.

What if you don’t do social media?

Even if you don’t have a Facebook, Twitter etc., they can probably use your email address and find forums you subscribe to or comments you make on news articles.

A bunch of Freaking Weasels!

How many more must die in order to further prove that gun free zones create disarmed victims and enable murderous criminals?

This is straight out of the Jim Crow School of Social Policy.

School buildings have been a gun free zone for ages and we have seen how that has worked, what a bunch of communists running New York.

If the state of New York insists upon augmenting so many “gun free” zones then the state government should provide security screening just like TSA. The criminals must be as gun free as the law abiding citizens. If this is found to be too expensive and too intrusive then drop the “gun free” designation. I don’t think many ordinary citizens want this level of scrutiny into their daily lives. Non gun owners just go about their business unconcerned with security or just how safe they are with concealed carriers all around them and NOT seeing a bloodbath as their liberal… Read more »