U.S.A. –-(AmmoLand.com)-– Far above the Arctic Circle, on December 18, 1983, a man was attacked by a sow polar bear and her cub, without provocation, on King Christian Island. Colleagues were able to stop the bears from killing and eating the victim. A colleague drove off the bear using a front-end loader in spite of repeated attempts by the sow to retake possession of the wounded man.  The arrival of a pickup truck with an armed passenger resulted in the sow being wounded and both bears were driven off. The man survived.

The incident was revealed in the Freedom of Information Act (FOIA) response obtained by AmmoLand from the Department of the Interior.

Because the names of the people involved have been redacted, pseudonyms have been used to make the account more readable. Panarctic Oils was conducting an exploration of arctic resources in 1983. One of their bases was on King Christian Island in the Canadian arctic. 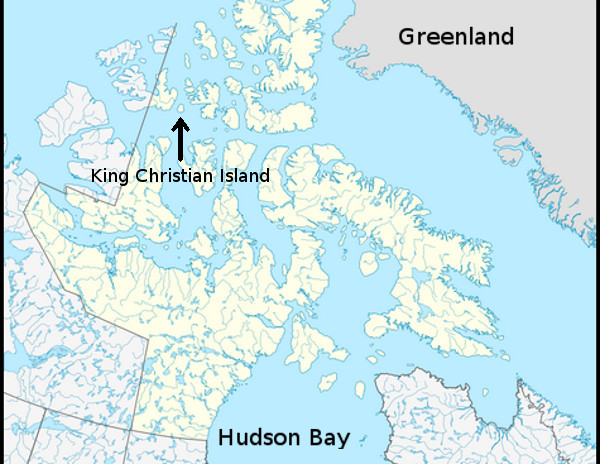 From the FOIA, as reported by bear researchers, with pseudonyms added and lightly edited for clarity:

It was dark outside. At 12:45 a.m. Dave and Joe went to dump the garbage and pump water. Joe was getting ready to pump water when Dave came walking around the corner with a polar bear right behind him. Joe started running to camp and looked back to see Dave fall. The bear had swatted him across his buttocks causing him to fall down. Once down, the bear grabbed him by his arms and proceeded to drag him for 300 m. Dave struggled the whole time and this probably increased the severity of his injuries as the bear hung onto his arms to drag him.

From the time that the bear began dragging Dave away to when Bill found him, no one but Dave knew what was happening. Dave mentioned at the time that at one point the cub came and grabbed one arm and started to pull. The mother at that point dropped Dave and went after the cub and chased it away. Dave’s comments at the time were that the bear was not so vicious when he stopped fighting.

Joe woke up the radio operator and got the gun. He went outside and fired 3 shots in the air. Joe returned to the radio room and contacted Bill and Eric. They were together about 1/2 km from camp. Bill was on on the loader and Eric in the pickup. Eric drove back as quickly as possible and picked up Joe. They were limited in their area of search by the amount of snow.  Bill on the loader had more manouverability and Joe directed him to the general area where he thought the bear may have headed.

Bill started looking and about 10 meters past the dock saw the bear but could not see Dave. As he got closer, he could see the bear was lying on top of Dave, sort of hiding him. Bill could see Dave’s feet and he drove up and hit the bear with his forks (on the front end loader) to get the bear off. He thought Dave was dead and to prevent the bear from attacking further, he drove the loader over Dave’s body (between the wheels). The bear backed off about 3 meters and then he (Bill) saw Dave move his hand and told Dave to get under the loader. When the bear saw Dave move, it charged Dave again but just as the bear got close, Bill dropped the forks onto the bear, hitting it and causing it to move off about 7 meters. The bear then charged the loader from another angle and Bill not being able to move, honked the horn. As the bear backed off, Dave crawled out from under the machine and up into the loader.

Bill believes that the equipment and noise scared and confused the bear. This contributed to distracting her and helped to keep Dave alive until he was rescued.

Meanwhile, Joe, in the pickup heard from Bill that he had found Dave and the bear. Joe and Eric turned the pickup to face the area and saw the bear running away. Joe got out of the truck and shot at the bear from 30 meters. The bear was wounded but managed to get away.

The next morning two Inuit were brought in from Resolute with the RCMP. They tracked the bear and found her about 8 km from camp. Joe’s shot had taken her bottom jaw off and she was dying. The Inuit shot and killed her about 10 a.m.

In the confusion of the evening before, the bear’s cub was left behind. It was shot by the cat skinner (not identified) when he saw it heading back into the camp area.

Dave was brought inside and they administered first aid to him. Joe estimates that from the time that the bear first attacked Dave to when he was brought back into camp was about 12-15 minutes. Dave was medivac’d out and hospitalized for an extended time. His scalp was torn off, however, from the wounds it appears that the bear clawed the skin off rather than chewed it off. Apparently Dave was lying on his stomach and the bear kept trying to roll him over with her paws.

The camp had only been opened two days and the crew had arrived that evening. They backtracked the trail of the female and her yearling. She had been walking along the beach and it appears that as soon as she was downwind from the camp, she made a right angle turn and headed straight for it.

People are made of meat. This appears to be a predatory attack. King Christian Island is a very remote area. It is uninhabited. The bears may have been a bit cautious while “testing” the new prey. From the information provided in the FOIA response, it appears there was only one firearm allowed at the site, almost certainly a limitation imposed by the Canadian government. There was no mention of caliber or gauge of the firearm used.

This correspondent has been unable to find any contemporaneous articles published about the incident. It has all the ingredients for a great human interest story, a giant predator preying on humans; the struggle for survival; a hostile, dark, cold environment, heroic actions by the victim’s colleagues, man and machine against the predator in a scene similar to that in the movie “Aliens”. If any readers find a contemporaneous account, please let us know of it.

The Panarctic Oil company had been fined $150,000 by the Canadian government, for dumping oil residue and garbage, which had no environmental effect, according to the court, in January of 1983.  The corporation was still on probation in December of 1983, so it likely worked with the government to repress news of the polar bear attack. Bear researchers knew of the incident in 1988.

Turned a bear attack into an environmental issue. Sounds like government

musicman44mag
Reply to  Matt in Oklahoma

canada does not want their people to be safe from anything, wonder if good people of canada will have had enough and vote themselves out of that screwed up mess, that almost happened in the 80s, progressives backed down when they figured with no natural resources or workers they would starve…. fast forward 40 years now the police are more like the stazii ,guns have been taken and they are trying to take all weapons from the people looks more and more like formula for a civil war , same one brewing here, only the caniadians dont have a history… Read more »

Last edited 19 days ago by swmft
2

Dean:
Great writing!
Been a while since mining school.
Jack