U.S.A. –-(AmmoLand.com)- Standard Manufacturing’s Switch-Gun .22WMR Folding Revolver has expanded into .22LR. The Switch-Gun is compact enough to fit into your pocket and occupies about the same space as a smart phone, though when open, features a large handle which provides a grip similar to a full-sized revolver yielding a high degree of control and accuracy. The Switch-Gun is built to be as compact as possible without sacrificing the most important aspects of a firearm, such as a comfortable grip, proper control, accuracy, and easy firing.

The Switch-Gun was designed with the safety and comfort of our users in mind. When in the folded position, the grip of the Switch-Gun completely encapsulates the trigger to prevent an accidental discharge. Upon depressing a button, the Switch-Gun immediately springs open as it is ready for the immediate and reliable discharge of five .22 Long Rifle cartridges. The Switch-Gun can help anyone make sure that they can always defend themselves. Having a gun that can be concealed in one’s pocket or fit easily into a drawer in your home can provide you with the proper protection wherever you may be.

Such firearms include the DP-12 Double Barrel Pump Shotgun, which received critical acclaim by winning the 2017 NRA Golden Bullseye Award. Other firearms include the SKO-12, SKO Shorty, and SKO Mini, which is a line of gas-operated, semi-automatic shotguns, and the Shorty and Mini specifically being available for firearm owners in Connecticut and Massachusetts.

Standard also produces their own line of handguns, combining classic and modern gunsmithing techniques to create their own versions of the classic 1911 and Single Action Revolvers in .45 LC and .38 Special. And most recently, there has been the release of the S333 Thunderstruck, which is a double barrel, double action revolver that simultaneously fires two bullets per pull of the trigger.

Today, Standard Manufacturing continues to innovate and create top-quality firearms in-house that are reliable, useful, and provide a great and safe experience for the customer. 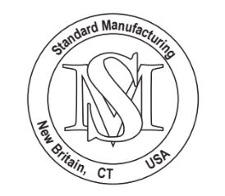 I want one just because I like mouse guns and odd little gadgets and this is both.

.75in barrel it says. Yrs ago I compared the other 5 shot folding
handle 22s and with a one inch barrel, the 22 mag only got something
like 64 more ft per sec than the 22LR. The chronometer showed neither
round exceeded 700 ft per sec if I remember right. Decided then to
use those size weapons as my work in yard gun with snake shot, not
a gun to depend on in a jam.

Remarkable! And ideal for close quarter interactions. Although fear factor and stopping power quite suspect.

Damn! Guess I will need to get one of these, now. I wanted one in .22LR more than .22WMR but a few months ago they told me there were no plans to introduce it in .22LR. I bought the .22WMR.

Now I will need to get a .22LR version, a more concealment friendly size.