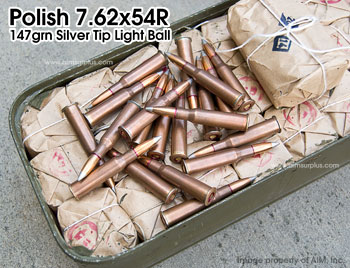 Middletown, OH – -(AmmoLand.com)- Considered by many to be some of, if not the best surplus 7.62x54R ammunition. Features a 147grn silver tipped light ball steel core full metal jacketed bullet, copper washed steel case, and berdan primer. This is clean, sure fire ammunition. Packaged 20rds per pack, 440rds per can, and 880rds to a wooden case. Can opener included with 2 can or greater orders only. Detailed pictures below.

Some BackGround on 7.62x54R Ammunition.:
During the long history of the Mosin Nagant design a number of countries have produced 7.62x54r ammunition in a wide variety of types. Many of these have been imported to the United States and are found at relatively cheap prices compared to commercial ammo. Although the types of surplus readily at hand change on a regular basis there hasn’t been a time recently when 7.62x54r was completely unavailable. Several commercial firms are also currently producing 7.62x54r in a variety of loads. Shooters seldom have to worry about finding Mosin Nagant ammo as they did in the past, but the problem now is deciding which ammo to buy. There are several factors to consider when making the decision, although each rifle will have a “preference”. Some shooters experience sticky extraction with lacquer coated cases and avoid them at all costs while others find some of these loads to be the most accurate. Others are limited to lead core by the rules of the ranges they use and even steel jacketed bullets are not allowed in some cases. Lighter bullets generate less recoil and can make extended range sessions with lighter rifles and carbines more pleasant. Heavier bullets often hit closer to the point of aim when using military sights regulated for longer distances. Visit 7.62x54r.net for more information..

Then check out AimSurplus for great prices on Surplus Polish 7.62x54R Ammunition, but be prepared to wait as the gun rush of 2008 has them backed up in the shipping department. 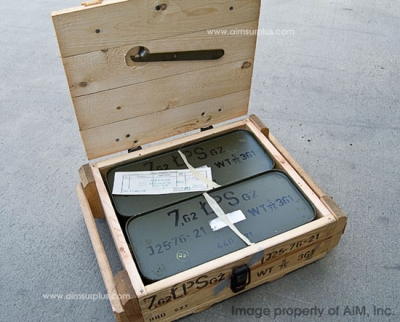 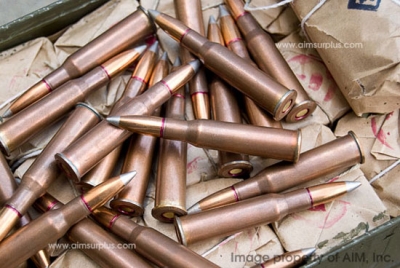 I would like to purchase some of this 7.62x54R Surplus Ammo for my vintage rifle. How do I order it and how much does it cost? Thank you. Jeff

I recently came accross your blog and have been reading along. I thought I would leave my first comment. I dont know what to say except that I have enjoyed reading. Nice blog. I will keep visiting this blog very often.