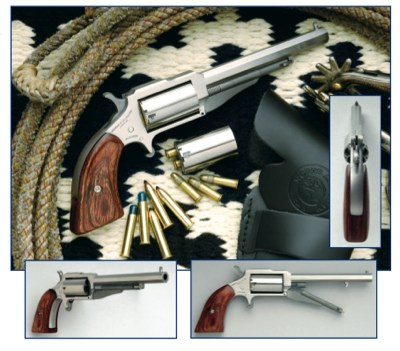 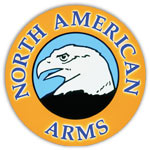 North American Arms – -(TheFirearmBlog.com)- The Earl is a five-shot, single action 1860’sstyled mini-revolver chambered in .22 Magnum. Named after the NAA gunsmith who originally developed the product, with its faux loading lever (which secures the cylinder pin), “The Earl” resembles a 150 year old percussion revolver then common in the Old West.

With its heavy octagonal barrel, top strap channel and bead front sight, “The Earl” could become your favorite plinker (pray for the snake, rodent or tin can that dares cross your path!).

With available flap holster of belt-grade leather, strap on “The Earl” for an imaginative trip back to a simpler time.

As another example of NAA’s craftsmanship and attention to detail – the closer you look, the better we look.

North American Arms is pleased to announce that it’s recently introduced new .22 WMR plinker, “The Earl”, will be available for sale in CA. “The Earl” enjoys an exemption from the regulations outlined in CA SB 15 specifically available to 5+ shot single action revolvers with barrels 3″ in length and an overall length 7. 5″. This exemption means that these firearms need undergo no testing or manufacturer’s certification requirements. Similarly, NAA will also make available in CA its MiniMaster models which enjoy the same exemption.

North American Arms will continue to sell in CA its 22MS and 22LR models which are listed in the Roster of Handguns Certified for Sale.

– It should be noted that the firearms actions of all NAA revolvers are functionally identical and that, when the hammer is properly seated in the cylinder safety slot, the gun is perfectly safe from accidental discharge due to a drop.

It sounds like a problem. Call the factory and they will fix it. NAA's customer service is top notch.

Dear good morning friends, did I buy a NAA 22 Magnun of of 1 1/8 and when it shot it the cylinder pin tends to leave and I have to put it and it fit again, because this is happening? and since I can solve it?

Can you provide more feedback on how it shoots..the overall feel.

Is it fun to plink with (.22 mag)? Have you tried the snakeshot load? Does it provide a good grip, "purchase point" for a normal sized man`s hand–or does it feel like it slips? thanks!!!!!!

Got my NAA Earl yesterday. I must say, it's a sweet little gun. It probably replaces my NAA Minimaster as my favorite NAA .22 magnum revolver. I LOVE the octagonal barrel. And it seems very accurate, especially with the magnum cylinder.