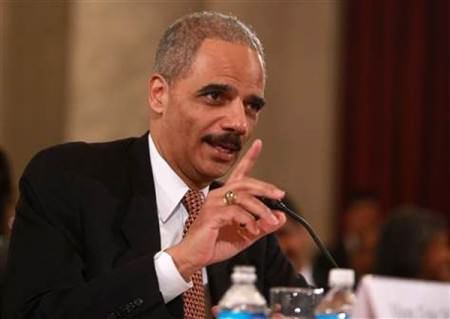 Washington, DC –-(Ammoland.com)- Attorney General Eric Holder — recently caught lying under oath concerning his knowledge of his department’s Fast and Furious program — may be moving a step closer to the inside of a jail cell.

On Thursday, February 2nd, Chairman Darrell Issa’s Committee on Oversight and Government Reform will hold another hearing on the disastrous Fast and Furious operation.

Arizona Congressman Paul Gosar, a member of that committee, is also pushing a resolution of “no confidence” in Holder’s management — or lack of management — of the Justice Department.

That resolution, H. Res. 490, provides a course of action for the momentum generated by that hearing.

H. Res. 490 finds that, as a result of “Holder’s failure to properly control, monitor, or establish Operation Fast and Furious, it is likely Mexican nationals were killed or wounded by weapons sold through this scheme” — and that the victims of Holder’s incompetence included U.S. Border Patrol Agent Brian Terry.

It goes on to resolve that the House has “lost confidence” in Holder, which is, basically, a call for him to resign.

Clearly, the Justice Department believes it can stonewall Issa’s inquiry and bull its way through questions concerning its criminal malfeasance. Adoption of the Gosar resolution would make it much, much more difficult to do so.

ACTION: Contact your Representative and urge him or her to cosponsor H.Res. 490.

About Gun Owners of America:

Gun Owners of America (GOA) is a non-profit lobbying organization formed in 1975 to preserve and defend the Second Amendment rights of gun owners. GOA sees firearms ownership as a freedom issue. `The only no comprise gun lobby in Washington’ – Ron Paul