After spending the last year or so getting to know the KKM 4 port compensated match grade Glock barrel, I can safely say that at the time this article is being written that the KKM comp is one of, if not the most effective 9mm comps on the market that are still small enough to conceal if you desire to do so.

U.S.A. –-(Ammoland.com)- When I was doing research into the Roland Special in early 2017, I looked into just about every compensator on the market to see if there was anything more efficient than the KKM 4 port compensator that is paired with the match barrel. After a bunch of diggin’ and learnin’, I came to the conclusion that Chuck Pressburg had done his homework and there wasn’t anything on the market at that time that would outperform the tried and true comp with the 9mm loads that I would be shooting. Kudos to Chuck for saving me some time and money by figuring out the ideal part and sharing that knowledge.

DISCLAIMER: I received this barrel for evaluation and was allowed to keep it due to the round count that I subjected it to initially. As of today, I have north of 6,000 rounds through this barrel.

Installing the comp onto the pistol isn’t something that takes a degree in mechanical engineering. Remove your factory barrel, insert the KKM barrel and thread the compensator to the barrel. If you want the tightest possible fit, make sure to leave the recoil spring out because the fine 9/16×32 threads on the muzzle might allow an extra turn if you don’t have something protruding from the front of the slide.

Once installed on the gun, the KKM 4 Port comp brings the length of the slide to just about the same as a Glock 34. Why does that matter? Finding a good holster from a reputable manufacturer like Safariland, Bladetech, or any number of other companies can be a challenge once you go past that Glock 34 length.

There are a couple of side benefits to the longer threaded barrel that is packaged with the 4 port comp that most people gloss over. I would have never noticed them or even thought about the most obscure benefit had Chuck not said something about it in one of our phone conversations, the barrel is nearly Glock 17 length so you eek out a bit more velocity than you would with a standard Glock 19 barrel. The second benefit is more noticeable when you have a weaponlight like a Surefire X300 u mounted to the gun. The comp keeps the lens of your flashlight clean when shooting and prevents the loss of light output when it matters most.

When you are buying a barrel labeled “match grade” you kind of expect that barrel to have match style features and perform like a match grade unit should. The KKM barrel doesn’t disappoint here with a highly polished feed ramp, a 15-degree target crown, and high-quality button rifling.

The 4 port comp does a wonderful job of recoil mitigation as you can see below. I can darn near keep the red dot in the window during the recoil cycle with pretty hot 124 grain NATO spec ammo thanks to the ports diverting gasses. That doesn’t really matter if we can’t get the pistol to group like we want to.

The three groups below were shot at 7, 15, and 35 yards unsupported. While my pistol skills are far better than they were the day that I shot these targets, it was still a very good day for me even by my current skill level.

After 6,000 rounds through this particular barrel and a few thousand through another KKM identical to this one, I have to say that I continue to be as impressed as I was the day I got the barrel on the range for the first time. As my skill level as a pistol shooter has grown, the barrel’s benefits in both increased accuracy and recoil mitigation have become more and more apparent. I say give one a go if you are looking for something different, you might be surprised at how serviceable and enjoyable it is.

If you don’t like it, rest assured that the lead time that is normally a month plus at KKM Precision will ensure that lightly used second-hand barrels are about the same cost as a new one. 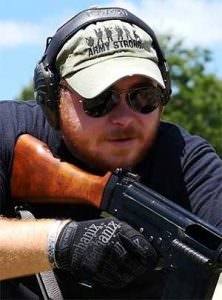 I was wondering if you could tell me what metal the KKM 4 port compensator is made from? Is it stainless steel like the barrel? Thanks!

What slide are you using? I’m ready to buy a Kim g19 comp barrel but have read of lock up with this highly engineered tight fitting barrel. It seems you have had no failure with 6000 rounds, that’s the type of reliability I’m looking for. I need a good match of slide and barrel.

Thanks for your response.
Mark

That is a factory Gen 4 slide that has had enhanced serrations and a RMR Pro Cut added by ATEi. https://www.ateiguns.com

There is a reason that my grip looks that way. I have a wrist injury that prevents me from canting my left hand any further than it is in that gif and my short fingers dictate that I rotate the right hand around towards the trigger thus the thumb out in space.

We all have to cope with physical limitations and find how to make the best of those limitations. Maybe watch that video that Jerry Miculek talks about pistol grip and says that he lets his thumbs hang out in space.

Consider working on your grip (right thumb up?). You might get more compensation that way.

OR, you could just use the old style weak thumb over strong thumb that was taught up until about 1980 or so when IPSC/IDPA happened on the scene and thought they’d force their grip on everyone else. 🙂 (Let the flaming begin)

In truth, both grips are equally accurate, thumbs forward is a slightly weaker combat grip platform and fractions of a second slower in reloading simply due to placement of the strong hand thumb.

There is a reason that my grip looks that way. I have a wrist injury that prevents me from canting my left hand any further than it is in that gif and my short fingers dictate that I rotate the right hand around towards the trigger thus the thumb out in space. Maybe watch the video where Jerry Miculek talks about pistol grip. We all have to work within our own physical limitations. My shooting speaks for itself and unless an instructor or someone who has verifiable pistol skills corrects me, I am going to continue shooting the way I… Read more »