U.S.A. –-(Ammoland.com)- The Winchester rifles were synonymous with winning the West, but to point out which of those rifles that actually achieved that has been open for debate. For years, most said it was the 1873, but more and more evidence that another Winchester rifle had a large hand in settling the frontier, and that’s the 1866 Yellow Boy, which didn’t suddenly quit being made when the 1873 Winchester was introduced but ended up being produced until 1899, thirty-three years into its run. In all that time it left its name on history not just here in the United States, but it found favor in the armies of the French and Turkey and saw conflict during the Franco-Prussian and Russo-Turkish Wars.

The 1866 Winchester really was a progression of the 1860 Henry Rifle designed by Benjamin Tyler Henry where a wooden forearm was added, and of course, the loading gate, patented by Nelson King meant you could quickly load the gun from the side instead of the front of the magazine. The 1866 was the first gun to bear the name Winchester after Oliver Winchester renamed the New Haven Arms Company the Winchester Repeating Arms Company. Like the Henry, the 1866 had the brass frame, which gave a distinctive look, leading to its nickname, the Yellow Boy. Made from gunmetal, known as red brass, it’s a composition of mostly copper, tin and zinc. Like the Henry before it, the Yellow Boy was chambered in the .44 Henry also known as the .44 Rimfire. The round had a 200-grain bullet that averaged 1,100 fps and was .446” (unlike later rounds like the .44 Special & .44 Magnum with a .429” bullet) and was fairly potent, only 100 fps slower than the .44-40 that came out in the 1873 Winchester. Towards the end of production, the 1866 was chambered in .44-40 as well as .44 Rimfire. Colt even produced Single Action Army revolvers in .44 Rimfire to accommodate those who carried the 1866 Winchester so that they could have interchangeability with their firearms.

The Winchester 1866 was offered in full-length rifle versions with a 24-inch barrel, a 20-inch saddle ring carbine, and muskets that had a 27-inch barrel. There are the occasional rare exceptions of special order versions, but they are few and very far between.

The Winchester 1866 didn’t get all the glory that the 1873 Winchester did, but it did see a lot of use, on all sides and by all parties during the settling of the West. Archeologists have found .44 Rimfire cases over the years at the site of the Battle of the Little Bighorn. The 1866 was a favorite of Native Americans when Nez Pearce leader Chief Joseph surrendered to then Colonel Nelson Miles on October 5, 1877, at Bear’s Paw Battlefield near Chinook, Montana he gave up a well cared for 1866 Winchester that was adorned with brass tacks. The gun currently resides at the Smithsonian Museum.

Original Winchester 1866 rifles are very pricey, and with .44 Rimfire ammunition having been out of production for many decades, thankfully we have reproductions these days for those of us who want to relive the past. Uberti is making some excellent copies of the Yellow Boy, but recently, I picked up a new Winchester 1866 Yellow Boy Short Rifle in .45 Colt.

I know some purists have issues with a rifle that says both “Winchester” and “Miroku” on the same gun, but the quality of this rifle is second to none. I don’t have an original here to compare it with, but the new Short Rifle has a 20-inch round barrel, you can also get the full-length version which has a 24-inch octagon barrel. The Short Rifle holds ten rounds, while the longer barreled version holds twelve rounds in .45 Colt and fourteen rounds in .38 Special and .44-40. According to Winchester’s website, the 24-inch barrel is no longer in production, but you can still find them out there for sale.

I bought my 1866 Short Rifle in .45 Colt to go with my Ruger Vaquero in the same caliber, that and I had always wanted to see what the excitement was about. Having owned an original 1873 Winchester, the toggle link design of the action to those who are not used to it is very smooth. This gun was no exception, and in fact, it was much better than I anticipated. It’s not hard to see why the 1866 was so popular even after more advanced rifles came along. The bluing is very deep and pleasant to look at, and the black walnut forearm and buttstock look more like the wood you would find on older Winchesters than the reddish-hued stocks you see on the Italian imports.

I took the 1866 Short Rifle to the range with some Winchester 250 grain LRN factory ammunition. The sights are excellent, a folding ladder rear and a Marble gold bead at the front. At 25 yards, I did find that the gun shoots a bit high, but a good six o’clock hold puts the rounds right on target. The action feeds rounds quickly and very smoothly, and in the hands of someone with practice, you could put them downrange in a hurry. If someone had the mind to, this gun would certainly be an excellent choice for home defense in any of the three calibers.

I have heard more than a few people say that these pistol cartridge rifles are no good past only about 50 yards or so and after that, the rounds drop like a rock. I decided to see if that was true. I put out a silhouette at 125 yards, and with the same Winchester factory ammo I found that the gun still shot a bit high, but windage was pretty much spot on, I did pull a couple of shots off to the side a bit, and I think with more practice, the groups would tighten right up. In any event, the rumor that these guns can’t hit at even moderate distances is grossly exaggerated. 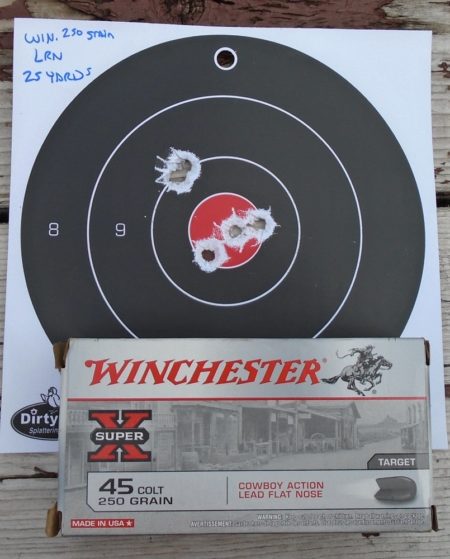 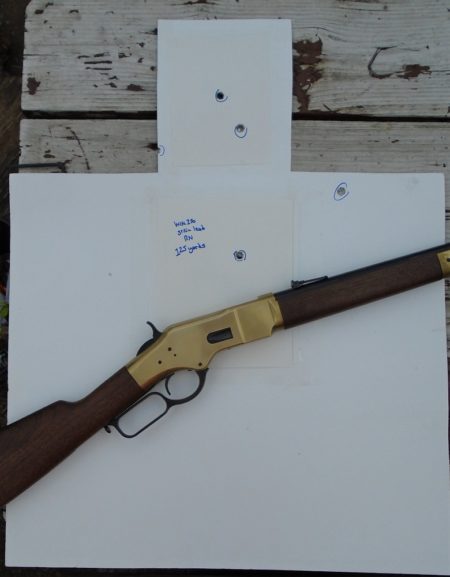 The 1866 Short Rifle cycled flawlessly and ejected the empties out of the top of the action without any issues. Winchester gave this rifle a true half cock and full cock, like the originals. In the past, the newer lever action rifles would have a tang safety mounted, which while functional, spoiled the looks of the gun and took away from the traditionalism that made them so desirable to own and shoot.

The new Winchester 1866 Short Rifle is definitely a winner, and whether you’re using it for Cowboy Action Shooting, hunting or even personal defense this gun fits the bill. It stirs the imagination and makes you wonder what it must have been like to handle one of these on the frontier in a time that while was dangerous and risky, was also more open and free. If you want one of these guns for yourself, the MSRP is $1,299.99. You won’t be sorry if you do.

David LaPell has been a Corrections Officer with the local Sheriff’s Department for thirteen years. A collector of antique and vintage firearms for over twenty years and an avid hunter. David has been writing articles about firearms, hunting, and western history for ten years. In addition to having a passion for vintage guns, he is also a fan of old trucks and has written articles on those as well.

I have one that is chambered in 38.cal it ejects out top & has saddle ring. But I’m pretty sure it says Navy arms on it. Can you tell me anything about it?

That’s most likely an Uberti made gun. They still make those, but not for Navy Arms anymore, for Cimarron & Taylor & Co. but they’re all made by Uberti. The ones like that are the saddle ring carbines.

Would be interesting to see a limited run in 44 Henry with ammo to go with it.