A pair of highly decorative wood ducks was an auction record for carver Dennis Schroeder at $12,390.

Strong prices with competitive bidding on most lots are the growing result of an influx of new buyers that continue to have an impact at Guyette & Deeter auctions.

Guyette & Deeter’s guaranteed condition reports, provided for each item, along with a trusted reputation for giving sound collecting advice, have worked to create a comfortable environment for their clients. Guyette & Deeter’s goal is to provide advice that will encourage buyers to continue collecting into the future.

Established in 1984, Guyette & Deeter is the world’s largest decoy auction firm with over $180 million in decoy sales. Three cataloged auctions per year are hosted in April at the North American Vintage Decoy & Sporting Collectibles Show in St. Charles IL; in the summer in Portsmouth NH; and in November at the Waterfowl Festival in Easton, MD. For more details, visit www.guyetteanddeeter.com. The firm also conducts weekly online auctions at www.decoysforsale.com. Since 1989, Guyette & Deeter has dominated the decoy auction market. In July 2018, Guyette & Deeter sold a mallard hen and drake by the Caines Brothers for $1,144,600. 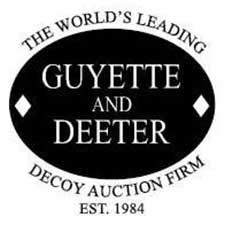 Guyette & Deeter’s next decoy sale will be held November 6-7, 2019 in Easton, Maryland in conjunction with the 49th Annual Easton Waterfowl Festival. Quality consignments for the sale will be accepted until September 6 or until full.