Everytown’s Tweet read: “Gun Owners of America has defended the Kenosha shooter & touted dangerous conspiracy theories about some of the most tragic mass shootings in America. Any candidate that accepts a donation or endorsement from GOA is co-signing these actions.” 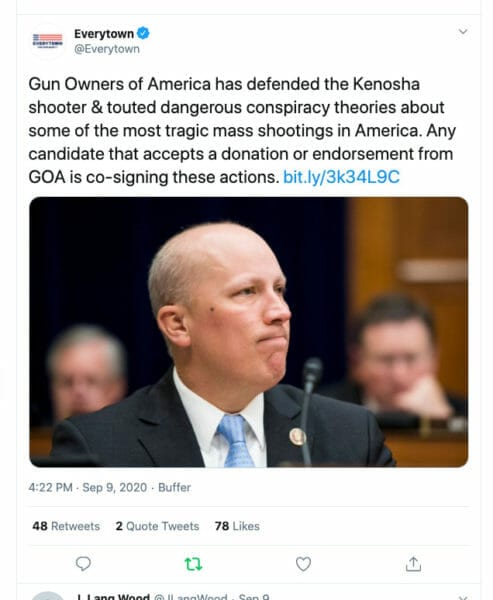 Shannon Watts, founder of Moms Demand tweeted: “A spokesperson for Gun Owners of America, a gun lobbying organization even more extreme than the NRA, on the teen who killed Kenosha protesters: “He used a firearm in the way it’s supposed to be used … he wasn’t reckless. He wasn’t firing into a crowd.” 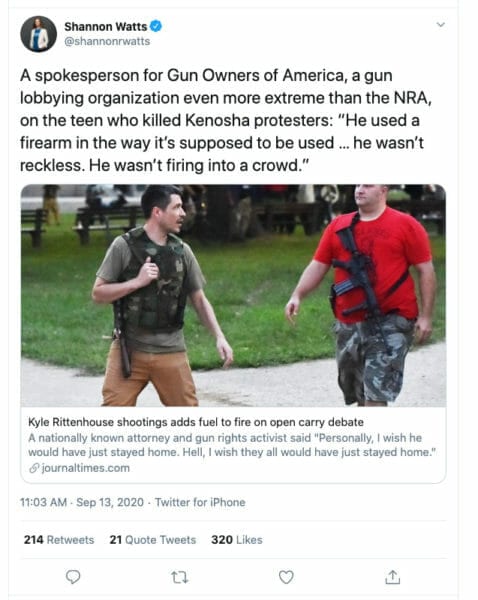 Everytown calls Kyle Rittenhouse the “Kenosha shooter.” Rittenhouse is a 17-year-old teenager that a business owner asked to help protect property. The teenager spent the day cleaning up graffiti from the previous night’s riots. Rioters burned and looted businesses the night before because of the police shooting of a man that police tried to arrest due to a warrant for sexual assault.

Rittenhouse was interviewed earlier in the night, and the reporter asked what he was doing in Kenosha, Wisconsin. Rittenhouse explained he was there to protect the business and render first aid to whoever needed it regardless of sides. Everytown’s propaganda seems to try to lump Rittenhouse with past mass murderers.

Violent protestors lit a dumpster on fire and tried to push it into a police barricade. Rittenhouse used a fire extinguisher to put out the flames. The enraged crowd attacked Rittenhouse, and someone fired a shot. Rittenhouse turned around only to have convicted child molester Joseph throw something at him. The man who raped five boys continued to charge Rittenhouse. Rittenhouse, who was armed with an AR15, allegedly shot and killed Rosenbaum.

The media demonized Rittenhouse. Joe Biden falsely claimed that the teen was a member of a white supremacist militia. There is no evidence to support Biden’s claim. GOA called out Biden for flaming the fires of discord for making baseless claims. GOA also called out the former Vice President and anti-gun advocate’s demonization of the right to self-defense.

Gun Owners of America believes that self-defense is a human right. Regardless of age, the video evidence shows Rittenhouse only defending himself. No evidence shows the teen as an aggressor. Rioters have attacked people from coast to coast, including the murder of a Trump supporter in Portland.

Everytown for Gun Safety also claimed that the gun-rights group peddled conspiracies. The rabid anti-gun group did not list a single conspiracy that GOA has pushed to its membership, or anyone else. Looking through past GOA posts, tweets, and alerts, AmmoLand did not turn up any talk of “false flags” or any other conspiracies. AmmoLand also could not find any interviews with GOA staff talking about conspiracy theories.

Recently, USA Today op-ed contributor Justin McFarlin wrote an article claiming that guns are now “white privilege.” He says it is dangerous for a black person to be armed. McFarlin claimed to be a firearms instructor and a gun owner. After looking into McFarlin’s background, it appears that he is an employee for Everytown for Gun Safety. In the anti-gun advocate’s article, he talks about whites using guns to intimidate black protestors. The report shows a picture of two people—one in a Hawaiian shirt and the other holding up a rifle. AmmoLand noticed someone turned up the contrast in the image. AmmoLand was able to track down the two people pictured to try to figure out the reason for the contrast adjustment.

The man in the Hawaiian shirt is Mike Dunn. He was speaking at a Second Amendment rally in Richmond hosted by Black Lives Matter 757. The man holding up the rifle is Brent “Pops” Holmes. In a further twist of irony, Holmes is a black gun owner and advocate.

This omission left gun advocates wondering if Everytown was the one that was spreading conspiracy theories and fake news? One of these gun-rights advocates is GOA’s Senior Vice President, Erich Pratt.

“It appears that the picture in question was doctored to peddle the conspiracy that whites in general – and hence, Kyle Rittenhouse by inference – are gunning for black victims,” Pratt said. “But the picture shows the exact opposite to be true, which underscores just how desperate are the anti-gun conspirators on the Left to bury the real truth.”

Everytown did not respond to AmmoLand’s request for comment.

John is a NRA instructor and a constitutional activist. John has written extensively on the patriot movement including 3%’ers, Oath Keepers, and Militias. In addition to the Patriot movement, John has written about firearms, interviewed people of all walks of life, and on the Constitution. John lives in Northern Virginia with his wife and sons and can be followed on Twitter at @crumpyss, or at www.crumpy.com.

Bloomberg and his minions will rue the day that they destroy the NRA. GOA and 2AF are no compromise. No negotiation. The left is intent on destroying our Constitutional Republic. Are you 3% enough to prevent them? Semper Fi

Bloomberg and his flying monkeys

Bloomberg and his flying monkeys

Bloomberg and his LYING monkeys

ALL GUN LAWS ARE INFRINGEMENTS

HELL NEEDS TO BUILD ON!! IT’S GOING TO BE OVER FULL OF THESE CRAZIES….AND HATEFUL TERRORIST….

MDA is a sneaky cult that doesn’t allow their members to express their views individually and publically.. Maybe Kool Aid will arrive soon.

Maybe Shannon Watts should be required to watch the videos of Kyle Rittenhouse trying to get away from the violent mob long before he had to shoot a couple of them to ensure his own safety?

chocopot
Reply to  Get Out

The Left isn’t interested in truth or facts. They have their agenda and that is all that matters to them.

“…Gun Owners of America, a gun lobbying organization even more extreme than the NRA…”

Should read …” a civil rights organization even more extreme than the NRA…”but still quite the compliment for GOA.

Everytown and Mom’s Demand Action are Anti-gun & Hate the Second Amendment. If they get a repeal of 2A and have all guns taken, who is left possessing guns? Can you say CRIMINALS? So, us folks who live where the response of police protection could be at least a half hour, are vulnerable to the criminals with guns. There are over 5 million illegal guns on the street in the hands of criminals, how does Everytown and MDA propose to get those?

If they get a repeal of 2A and have all guns taken, who is left possessing guns? Those who refuse to bow down to the marxists, that’s who. Don’t forget…. the moment our Colonial forbears first fired upon General Gage’s troops back on 19 Paril 1775, they ALL became traitors, having tanken up arms in an acto of war against George Three the Kid King who had ordred Gage to take up the weapons of those pesky colonials. There are over 5 million illegal guns on the street in the hands of criminals No guns are, in and of themselves,… Read more »

“Spare the rod, spoil the child.”

“Everytown did not respond to AmmoLand’s request for comment.”
Why am I not surprised??? 🙂

That mommy’s want action group have by themselves committed acts of terrorism by swatting people, they have had a number of people killed. They see a person carrying they call the police tell them there is a person waving a gun around , so when the police show up heres a guy with a holstered gun and what happens the police react before getting any info and afterwards they have a man that is either dead or seriously injured for no reason other than he has a holstered gun. This scenario has played out how many times over the years?… Read more »

No difference between commie and socialist, except for the spelling thereof.

Go for the “Quigley”.

Anti-constitutionalist’s sense of morality is situational, based on incident and emotion, instead of rooted in God’s word and law.
Anti-constitutionalist’s stand for nothing. The situation determines their support for an issue and their emotions rule, not reason and rationality.
Moreover, they recognize the contradiction, but still cling to their situational justice. Situational justice is the tool of dictators, tyrants, despots, and unjust, unrighteous monarchs. It has no place in a free constitutional republic. In which the United States of America is……………….
Anti-Constitutionalist’s=Anti-Americans=Enemies of the United States…

There is a growing, irritating tendency in and out of journalism to misapply apostrophes.

This article is such an example.

Apostrophes are not used to form plurals.

Or, as this editor would apparently allow, “Apostrophe’s are not used to form plural’s.”

‘See how ridiculous that looks?

the lowly apostrophe (what nice big complicated word for a tiny little jot….) is pretty easy to overlook.

There is another very ridiculous trend in “journalism”. SOmeone quotes a tweet, in its entirety, then follows the quote with the tween itself. Complicated, messy, wastes space and time, and bandwidth.

Who gives a crap!!