U.S.A. -(AmmoLand.com)- The Vertx Gamut 2.0 is one of those things that you never knew you needed until you have a chance to use it. In the broadest of terms, the Gamut is a specialized backpack designed specifically to accommodate a large-format pistol like an AR along with all the accouterments you would ever need. But with an MSRP of around $240, is it really worth the cash?

We live in turbulent times; Sometimes, that means that your standard conceal carry pistol isn’t enough to get you and your loved ones out of harm’s way. That’s a big part of the premise behind a go-bag or a truck gun. They provide shooters with more firepower than a compact handgun to escape a dangerous situation. And while something like a full-sized AR-15 or AK carbine would be great for fighting off hordes of attackers, they are bulky, heavy, and extremely difficult to store discreetly in either a workplace or a vehicle.

One solution has been an AR pistol, but even when in its most diminutive configuration, these guns are still vastly more difficult to conceal than your standard handgun. The obvious solution is to place said gun in a bag of some sort – but a duffle bag or even a military backpack doesn’t accommodate everything a shooter should have on them in case of an emergency. Even if said backpack does have enough room for everything, it will most likely leave these items in a jumbled mess – which is the opposite of what you need in an emergency situation. After all, if you’re trying to wrangle two kids and a wife through a city either swamped with violent protestors or actively falling apart due to a natural disaster, you shouldn’t have to worry about which pocket you shoved your spare magazine or IFAC in.

The Gamut 2.0 is the perfect solution to these issues. Yes, cleanliness may be next to godliness, but it’s certainly not the first adjective that comes to mind when you think, “door-kicker.” But in many ways, it absolutely should.

Think about counter-terrorism units or special forces – these guys have a very specific loadout, and they know where everything is. Which makes sense – fumbling for a magazine of a cleaning rod on the range is annoying, doing so in a firefight can be fatal. Which makes all the quick-access panels and organizers in the Gamut 2.0 so damn handy.

The Vertx Gamut 2.0 is a 25L capacity bag, measuring 21in tall, 14.5in wide, and 5.5in deep – but this is only part of the story. The Gamut has more organizational pockets and pouches than most people know what to do with.

For starters, it features a massive flat pouch between the wearer and the center of the bag that features a nice thick foam liner to prevent it from digging into your back. But rather than just leave this as open space, the designers at Vertx made the entire thing soft velcro, allowing soft magazine carriers to be placed throughout it at convenient angles. Which is ideal for quickly topping off your firearm without having to carry magazines directly on your person.

In the main compartment, the Vertx Gamut includes a massive divided compartment that keeps a stored firearm oriented the same way regardless of how the user wears or abuses it. Better yet, there’s even a spot for a soft body armor panel to give the wearer some ballistic protection should they require it.

Opposite of this main compartment, the flap is secured with two overbuilt zippers and features two separate zippered mesh compartments perfect for storing important items in an instantly visible way once the bag is opened. And on the other side of the flap, there’s another zippered long, shallow compartment that can be accessed without opening the entire bag.

Additionally, the Gamut 2.0 has sinched pockets on both sides that are great for storing bandages or spare socks or anything else you might need that wouldn’t raise an eyebrow to a casual observer.

But here’s the part of the review you really wanted to read – compatibility. In other words, what guns actually fit in the Gamut 2.0.

When he’s not reviewing guns or shooting for fun and competition, Jim can be found hiking and hunting with his wife Kimberly, their son, and their dog Peanut in the South Carolina low country. 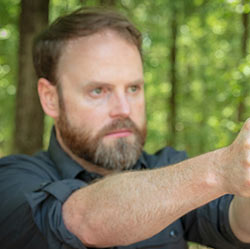 Is the Vertx Gamut 2.0 worth the price tag? For me, absolutely. I travel a decent amount and have a small kid, so I can’t just leave guns out in easily accessible locations. Plus, many of the places I travel to aren’t exactly 2A-friendly, even when I have a concealed carry permit for the state. So it’s always wise to keep your necessities close and discreet. Plus, there’s zero room in my son’s diaper room for an IFAC, so this is a great addition to our travel pack. If you have a Vertx Gamut 2.0 of your own leave a review  below.

Thank You gcm. Some people will find it useful and that’s a good thing. Other’s obviously don’t but the same size shoe doesn’t fit everyone. Just like guns and backpacks. There is a lot out here to choose from and someone did a nice job of explaining this one. Thanks Jim

Would the PSA AKV-9 fit neatly ?

Seems the folding “triangle” brace should at 19″ the collapsing brace will not at roughly 26″.

An “elite editor”? Watch your head when you go through doorways Jim?

You would think a person claiming to be elite on a gun website, would have enough situational awareness to understand a back pack like that will get a gun in your face, if you live around diversity.
If you have savage cultures near you or low income Whites who can act like them since the minorities don’t get punished for lowering our quality of life with their failed cultures, then it is not good to be a person with nice stuff or White skin or Yellow skin.

Last edited 1 month ago by WeWereWarned
-1

backpack has to be kevlar