U.S.A. –-(AmmoLand.com)- To say that there’s a lot at stake in the midterms this year would be a gross understatement.

Georgia has proven to be an important battleground for the Senate this year as many Republican strongholds turn blue. Gun owners remember Stacy Abrams barely lost to Brian Kemp, and Georgia quickly became a central focus in the battle for election integrity.

Make no mistake: when Democrats say that “voting rights” are at stake, they most certainly mean it. Just not in the way you might think.

The radically anti-gun Democrats have not only demonized some of their own (pro-gun) base but also their political opposition. It’s a tactic that has always been used in the past by both political parties, but not with the hatred and divisive rhetoric previously shown by Democrats.

So for example, when they express concern over “voting rights,” they’re really only talking about the right of people to support Democrats and nothing more. Consider the reaction to the Supreme Court case overturning Roe vs. Wade. Had the decision been in their favor, they would have applauded the mechanism that is the Supreme Court as honorable and incorruptible in every way.

No matter your views on abortion, the point is clear that they don’t envision a society where your opinion or thoughts matter, and by that standard you should view how they want to approach voting rights.

The Democrats have wanted federalized elections for a long time. From mail-in voting to ballot harvesting, their proposals bring the integrity of an election into question, at a minimum.

Returning to my home state of Georgia, we are politically standing at a crossroads.

Gun owners lost badly in 2020, losing both Senate runoff races and barely escaping with the governor’s race. The 2022 midterms are just as much about Republicans getting fired up to get out and vote as they are relying on the Democrats to feel so demoralized that they simply stay home.

Some hardcore Democrats are switching sides for sure, but most, at least historically, will sit out a race before they support another political party. Recent polling data shows Republicans ahead in most races in Georgia, but don’t let that be the laurels you rest on.

We should not allow the divisive and rhetorical tactics of the Democrats to cloud our judgment or make us forget who we are dealing with. We need to support Herschel Walker because he is from Georgia, and he wants to serve the great state of Georgia. He is one of us, and he has earned the support of Gun Owners of America.

Don’t let the opposition paint him as a “slow southerner” or something even worse. Raphael Warnock is not dumb. He knows that making Republicans stay home is the only way he stands a chance of beating Walker. Rather, Walker is a model American: a successful Georgian who values work ethic, gun rights, and Christian values.

To say Warnock is self-serving would be dishonest. He serves the likes of Chuck Schumer and Dianne Feinstein. His voting record thus far proves that. We need to show up for Walker and give him a chance to change course for Georgia. We must also hold the Republicans to the fire when we do win back the House and the Senate.

The days of lame-duck politics are over. The days of serving the party are over. Americans want politicians who serve the people and the Constitution of the United States.

That’s why it’s important to get out and vote this November. All the Senate needs to do is pack the Supreme Court with several more anti-gun Justices, and you can kiss everything you know and love about civilized Western society goodbye.

Eric Blandford is the YouTube personality known as Iraqveteran8888; the channel has over 2.6 million subscribers and has been in existence since 2008. He has guest starred in Ted Nugent’s Gun Country as well as appearing on Gunnytime twice as a weapons expert. Eric is the Georgia State Director for Gun Owners of America (GOA). 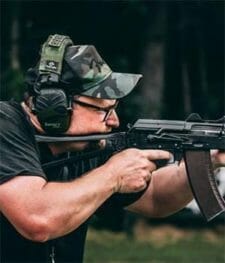 Whether you’re alive or not!

The author is correct, I enjoyed his wordsmything too…”don’t let that be the laurels you rest on.” That is the second most important segment of Mr. Blandford’s article. Do not pay a damn minutes attention to any polling you hear. That includes the Trafalgar Group polls. Polling isn’t what it used to be, now all you get are Push Polls designed to get the most ignorant that we share Oxygen with to vote a certain way or to piss a voter skeptic off so they stay home. Also, if you answer a pollster, I don’t waste my time with them… Read more »

I disagree with the”get your vote in early” if your state is mail-in only. The vote tallying has already started here in WA . The early counting gives the dems a heads up on how many votes they need to manufacture. The local wisdom is to hold your vote until just before, or on voting day, so they don’t have time to figure out how many votes they need to win. It happens more often then not here, and if I’m wrong, I’ll eat your hat. Two elections off the top are Gregoire and Sawant, and there’s a whole lot… Read more »