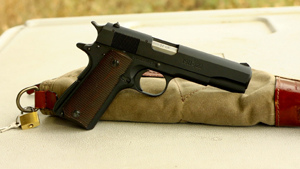 Average Score-4 stars out of 5

Sign up for the weekly Monday Morning Must Have Videos here. http://mad.ly/signups/80597/join

(AmmoLand.com) You could easily spend the better part of your day discussing John Browning’s firearms designs and what a genius that man was. With many of his designs still in use after 100 years, the value of the Browning legacy on the hunting and shooting world goes without saying.

To commemorate the hundred year anniversary of the world famous 1911 Browning pistol design, Browning unveiled the 1911 .22.

For starters, this pistol is a lot of fun to shoot. The gun is an 85% scaled down version of the original 1911 pistol.  It is pretty easy to shoot if you have bear paws for hands and it’s also easy for young shooters to use even with the somewhat stiff trigger. The Browning 1911 .22 comes with composite grips.

The 1911 .22 functions just like any regular 1911 and breaks down like a full size 1911 for easy field stripping and familiar function.

The gun also features a manual thumb safety and grip safety. The fixed sights are ok but work fine for the gun.  The 1911 .22 is fairly accurate as well.

The pistol has a straight blowback action.  This gives the gun a reliable, simple action to handle a lot of rounds.  Myself and some friends ran a brick of .22 ammo through the 1911 .22 one weekend without any functional issues.  The included 10-round magazine is easy to load, but your fingers will get tired if you are doing a lot of shooting.

As I said, the gun is a blast to shoot. It allows you to have a fun day on the range, practice your shooting skills and is fun for shooters of all ages and experience levels.  Up until recent ammo grabs, the .22 ammo was also a cost saving advantage, but it looks like ammo sales are returning to some normalcy.

Some people were griping about the size of the gun and that the gun is chambered in .22 not .45. While I understand their complaints, the gun is a fun version and a neat way to commemorate the pistol design.

Browning offers the 1911 .22 in an A1 or Compact versions.  Both versions are available in a Matte Blue finish or there is a Desert Tan Composite Frame version that is really cool looking.  MSRP ranges from $579.99 to $599.99 depending on the model.  This may be an expensive “plinking gun”, but for the shooter that wants another fun shooting gun (aren’t they all, though?) this is a fun one to add to the collection.

Quality: It’s a well made gun and is a nice commemoration to John Browning’s original design.

Reliability:  The gun handles a lot of .22 shells without any functional issues.  It’s also very easy to clean.

Price/Value: It’s on the higher end for a “plinking” gun, but it’s another well made firearm from Browning so you get what you pay for.

Referability:  If you are needing a fun way to practice your pistol shooting skills or want to introduce young or new shooters to pistol shooting, this is a great gun for that.

I bought one of these for my wife. Thus far, she has a couple of thousand rounds through it with no issues. I am a 1911 fan, and I fell in love with Browning’s 1911 22 when I first saw one.
My ONLY gripe is the sights are just too small. I know, they a scaled to match the gun..but come on..
Other than that, it suits my wife as she likes the light weight, she can strip and clean it herself, ( I like that too.) and she can shoot it quite well.