Arizona – -(Ammoland.com)- Toby Obermeit, Lead Design Engineer at Kel-Tec, holds a PMR-30 magazine.  That magazine holds 30 .22 WMR cartridges.  The design is popular, with Kel-Tec shipping 500 of the pistols each week.

I talked to Toby at the Shot Show this week.   He and Kel-Tec recently obtained a patent on a new magazine design that would create an even larger capacity for the .22LR cartridge.  It would fit in a pistol grip, with a preliminary capacity of 33 rounds. 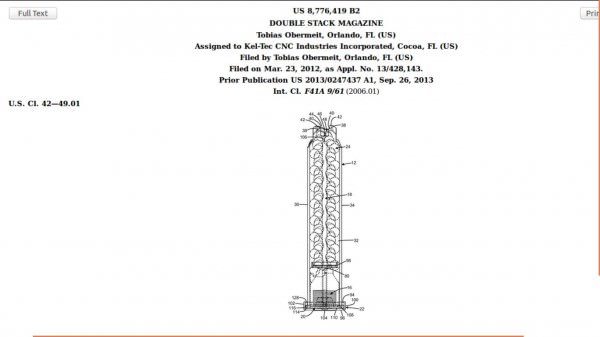 Toby said that Kel-Tec CNC has been granted the patent just a few weeks ago.  It is specifically aimed at the .22LR.   The one pictured in the patent drawings holds 33 LR cartridges, but would likely fit in a regular pistol grip.  The patent is a departure from Kel-Tec’s more common practice.   Kel-Tec has generally followed the strategy of getting product to the market, rather than filing for patents.   Here is the abstract from the patent.  From uspto.gov:

Abstract from the patent:

It makes sense to me, in that the rod keeps the two columns of rimed cartridges separate, while using only a single spring system.  Knowing Kel-Tec and Toby, I assume that it was prototyped with a 3D printer.

Toby made no promises as to when a product might come of this patent.  He said that it would be at least a year in the future.  I expect that it will take at least a year.   The market is still hot, and product is flying off of the shelves.  There is less incentive for innovation when profits are high.   Still, Kel-Tec has been a leader in getting innovative products to the consumer.

I have often thought that there was a lot of space inside .22 LR pistol grips that was not being utilized effectively.  A 30+ shot full sized .22LR handgun with a 5 inch barrel, threaded for a suppressor, and weighing about a pound, would be a very nice backpacking and general field or “kit” gun.   A simple blowback design would allow for multiple barrel lengths and configurations.

I would like to see arrangements for an optical sight.  A small reflex pistol sight would work nicely.  A fixed barreled .22 pistol with an optical sight might be usable for small game to 60 yards.

A 30+ round .22 lr mag in a p-11 sized pistol with a threaded barrel would be a dream.
Otherwise, a PMR in .22 lr with a microdot plate system like the Canik SFX would be great too.
Can I pay now?

A cheap 22lr pistol holding 30+rds in a double stack? Yes, please. It would definitely be my next gun purchase if such a thing actually existed… and I normally would never consider owning a Kel-Tec. But for an affordable 22lr pistol that *comes with* the high cap double stack 30+rd mag I would definitely make an exception, espcially if it could cycle 22short (cycling 22cap also would probably be too much to ask for). Unless of course the “pistol” is one of those stupid AR style squirrel savior tacticool assault SBRs, but if it is an actual *normal* hi-cap handgun… Read more »

when will the 30 round 22lr be sold to the public , reserveme one

Reserve me ten of those mags. Two of the guns and several bricks of ammo.

I’m surprised that Ruger does not come up with something similar for the Mark IV 22/45 Lite or a Ruger LCP II Pocket Gun chambered in 22.

Bob Jones, THAT is exactly what I was thinking. The design of the Ruger 22/45 handle is already kind of fat and should most definitely hold a double stack of at least 20 or more 22LR rounds. Combining a solid, straight-shooting platform like the 22/45 with a double stack magazine like that would be an excellent target, hunting, & even protection package!

is the 22lr 33capacity keltec on the market yet

anybody ever tried 22LR in PMR or CMR

A PMR or CMR is not chambered in .22LR, so why would you?

Agree with jented above. I would be a scoop for Ammoland and a couple of it’s distinguished writers to follow the trail of .22lr from the factory (CCI, Winchester, Remington, and others) to where they actually ship the product. If it goes to a distributor then follow the distributor’s shipping to the retailer or wholesaler then to the final retailer along with quantities noted. There are still a boatload of hoarders out there. Oh wait – never mind Ammoland contributor writers would never do it (too chicken). So we will have to put up with more “propaganda” videos on why… Read more »

Sounds great. Now if we could only buy 22 ammo at a fair price to put in it.

I live in chgo area. the shelves are overflowing with .22lr. At reasonable prices. Have been for a year.

Oh boy a 22 magazine for what? A pmr type firearm. Would be nice. But I’d really like to see a sub 2000 or a 350$ pmr 30,or a complete family of affordable products from keltec. Sorry I was just dreaming.

They could license it to other companies.

Look at the full patent on google, drawings too.

I’m still a little confused. Would this magazine be usable only in a KelTec .22 pistol, or is it designed to fit other common .22 pistols like the Buckmark or Ruger Mk. 1-3’s as well? Seems like the latter would be a great after market addition, but my Ruger doesn’t look like it has a wide enough mag well (although it seems to have enough space for a double stack mag if it were modified).

Great idea, I had thought that this is the logical addition to the .22MT mag. Too bad KT makes so much vaporware, I’d like to see a .22LR conversion kit for the PMR.

spoken by the ignorant… they have produced every single thing they said they would… that’s the opposite of vaporware.

other guy
Reply to  Dr. Strangelove

I realize your comment is from 2015, but Kel-Tec is one of the most innovative gun companies out there. They’re constantly designing and putting to market new gear. There’s nothing vaporous at all about their wares brotato. Bite your tongue and pray the firearm gods forgive your blasphemy!